What is Congestive Heart Failure?

Hi, and welcome to this video about heart failure.

First, let’s take a minute to review the anatomy of the heart.

The superior vena cava brings blood into the right atrium, and when the atria contract, the blood flows through the tricuspid valve into the right ventricle. 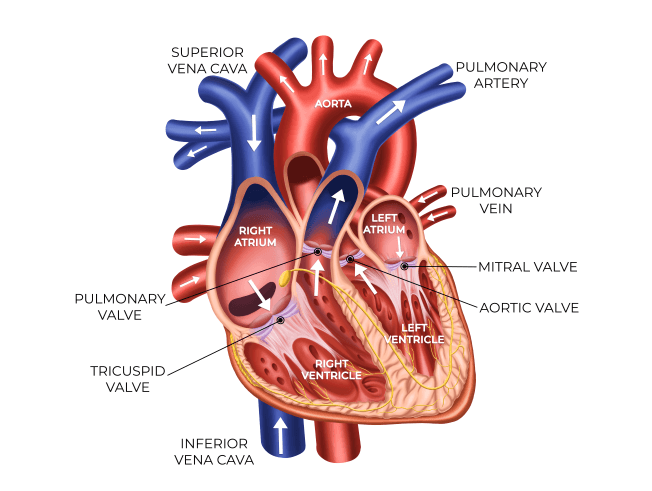 Thus, with a healthy cardiovascular and respiratory system, the heart is continually pumping and the blood is circulating without damage to the heart. However, if something impairs this flow of blood, such as hypertension and plaque buildup, the heart can become damaged, resulting in heart failure.

The American College of Cardiology and the American Heart Association classification system for heart failure considers structural disorders and symptoms.

Left ventricular failure is the type of heart failure commonly associated with hypertension, which causes the left ventricle to work harder to overcome systemic vascular resistance, resulting in increased need for oxygen and left ventricular hypoxia. This impairs the ability of the muscle to contract, so cardiac output decreases. The left ventricle begins to dilate, hypertrophy develops, and pulmonary pressure increases as blood backs up into the left atrium and pulmonary veins, resulting in pulmonary edema.

Complications of left ventricular failure include:

Complications of right ventricular failure are those that are commonly associated with heart failure and include:

The body attempts to compensate for heart failure by doing the following:

The first step to treatment of heart failure is identifying and treating the underlying cause, so treatment approaches may vary, but common treatments include:

Some people may require an implantable cardioverter defibrillator or biventricular pacing, especially those with ejection fractions of less than 35%.

Medications are commonly used to control symptoms of heart failure and include:

According to the American Heart Association, over 300,000 deaths are caused by heart failure and about 960,000 new cases are diagnosed every year in the United States. For almost all patients, heart failure is a chronic condition that must be continually managed, so preventive measures, including healthy lifestyle choices, are essential.