What is a Mole Ratio?

Hi, and welcome to this video on the mole ratio, sometimes referred to as the molar ratio. It’s a fundamental concept in chemistry that’s used to convert back and forth between moles of each substance in a reaction. Among other things, it’s necessary for calculating theoretical yields and limiting reagents. This is most certainly a concept best learned through examples, so let’s jump right in.

Before we put these mole ratios to use, let’s consider a more relatable example to solidify this concept.

When you make mac n’ cheese, you always use the same ratio of ingredients. One box of pasta, 1 packet of cheese, 3 tablespoons of milk, and 2 tablespoons of butter.

So, for every 3 tablespoons of milk, we can make one recipe of mac n’ cheese.

We could do this for any combination of species in the reaction. For example, for every packet of cheese we have, we need 2 tablespoons of butter.

And of course, if we want more mac n’ cheese we can double the recipe.

If we did that, the ratio between ingredients would stay the same.

So, in fact, anytime you follow a recipe, you’re basically employing the concept of mole ratios, so keep that in mind the next time you’re cooking!

Now let’s put these mole ratios to work by looking at the formation of ammonia from nitrogen and hydrogen.

We can’t even discuss the concept of the mole ratio for a reaction if it is unbalanced. So let’s balance this first.

Remember, we can’t change the molecules, split bonds, or change the chemistry in any way. We’re stuck working with the molecules we’re given, so to balance a reaction we can only increase the number of each molecule by adjusting the stoichiometric coefficients.

Said another way, to make 2 molecules of ammonia, we need 1 molecule of nitrogen and 3 molecules of hydrogen. To have a balanced reaction with no leftover atoms, the chemistry demands this ratio of molecules.

We could, of course, multiply by a factor, say of 2, so that 2 molecules of nitrogen plus 6 molecules of hydrogen make 4 molecules of ammonia, which still works because we haven’t changed the underlying ratio between molecules. In other words, 1 divided by 3 equals 2 divided by 6.

Another way of phrasing this is that 1 mole of nitrogen is stoichiometrically equivalent to 3 moles of hydrogen when making ammonia. This means that 1 mole of nitrogen gas will make you the same amount of ammonia as 3 moles of hydrogen. So even though we have different amounts of each substance, when it comes to making ammonia, we can think of them as being equivalent.

We can actually write this out in an equation.

For the formation of ammonia, one mole of nitrogen gas is stoichiometrically equivalent to 3 moles of hydrogen gas.

We can then rearrange this to get the actual mole ratio 1 mole of nitrogen gas over 3 moles of hydrogen gas is equal to 1.

We now can use this to convert between moles of hydrogen to moles of nitrogen, which will be very useful when we need to calculate yields or limiting reagents.

Of course, we could flip the ratio if we needed to convert from moles of nitrogen to moles of hydrogen.

Similarly, we can write out the molar ratios for the other two combinations of reactants and products.

As you can see here, for every 1 mole of nitrogen, we can make 2 moles of ammonia

and for every 3 moles of hydrogen, we can make 2 moles of ammonia.

Now let’s think about how we actually use mole ratios in chemistry problems.

So, to make 10 moles of ammonia, we need 15 moles of hydrogen and 5 moles of nitrogen.

Notice that when you write these calculations out, it’s very useful to specify the chemical species to which you are referring. So rather than just writing “4 moles”, write “4 moles NH3” to keep track of each.

Let’s move on to a slightly more complicated problem. Say we had 1 kilogram of nitrogen gas and wanted to know how many kilograms of ammonia we could make with that (assuming we have unlimited amounts of hydrogen).

So, using the mole ratio, we were able to calculate that 1 kg of nitrogen can make 1.21 kg of ammonia.

Now, pause the video and take a minute to calculate how many grams of hydrogen would be needed to make 500 grams of ammonia, assuming that nitrogen is in excess. The molar masses of ammonia and hydrogen are 17 g/mol and 2 g/mol, respectively.

Hopefully, that felt pretty straightforward (if not- don’t worry, we have some more practice coming soon). Here’s how we solved that problem.

Alright, before we look at a practice problem, let’s quickly review what we’ve learned.

Now try your hand at this problem:

For the combustion of propane, answer the following questions

Go ahead and pause the video now if you want to try this one on your own.

Alright, here’s how you should approach this.

First, check to make sure that the reaction was balanced- which it was.

1. Then, to find the mole ratio between oxygen and water, simply use the stoichiometric coefficients to show that for every 5 moles of oxygen that you combust, you produce 4 moles of water. 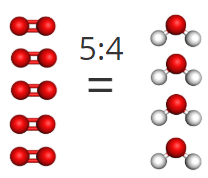 Since you started with 10 moles of propane, this means you would produce 30
moles of carbon dioxide.

3. And lastly, to answer the third question, we convert pounds of propane to grams of propane, then to moles of propane. We then use the mole ratio to convert to moles of oxygen needed.

This shows us that we would need 51.5 moles of oxygen to react with 1 lb of propane. 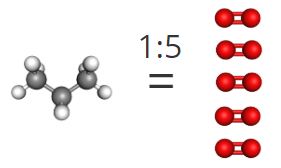 Okay, that’s all for our review of mole ratios! Thanks for watching, and happy studying!