Hi, and welcome to this video on cell replication, otherwise known as mitosis or meiosis.

The primary events that occur during mitosis are interphase (the cell prepares for division by replicating its genetic and cytoplasmic material). Interphase can be further divided into G1, S, and G2.

Then there’s prophase (the chromatin thickens into chromosomes and the nuclear membrane begins to disintegrate). Pairs of centrioles move to opposite sides of the cell and spindle fibers begin to form. The mitotic spindle formed from cytoskeleton parts moves chromosomes around within the cell.

Then, there’s telophase (the spindle disintegrates, the nuclear membranes reform, and the chromosomes revert to chromatin.) In animal cells, the membrane is pinched. In plant cells, a new cell wall begins to form.

Then, there’s cytokinesis. This is the physical splitting of the cell, including the cytoplasm, into two cells. Some believe this occurs following telophase. Others say it occurs from anaphase as the cell begins to furrow through telophase when the cell actually splits into two.

Meiosis has the same phases as mitosis, but they happen twice.

The nuclear membrane dissolves, homologous pairs of chromatids are separated and traveled to different poles. At this point, there has been one cell division resulting in two cells. Each cell goes through a second cell division, which consists of prophase (II), metaphase (II), anaphase (II), telophase (II), and cytokinesis (II). 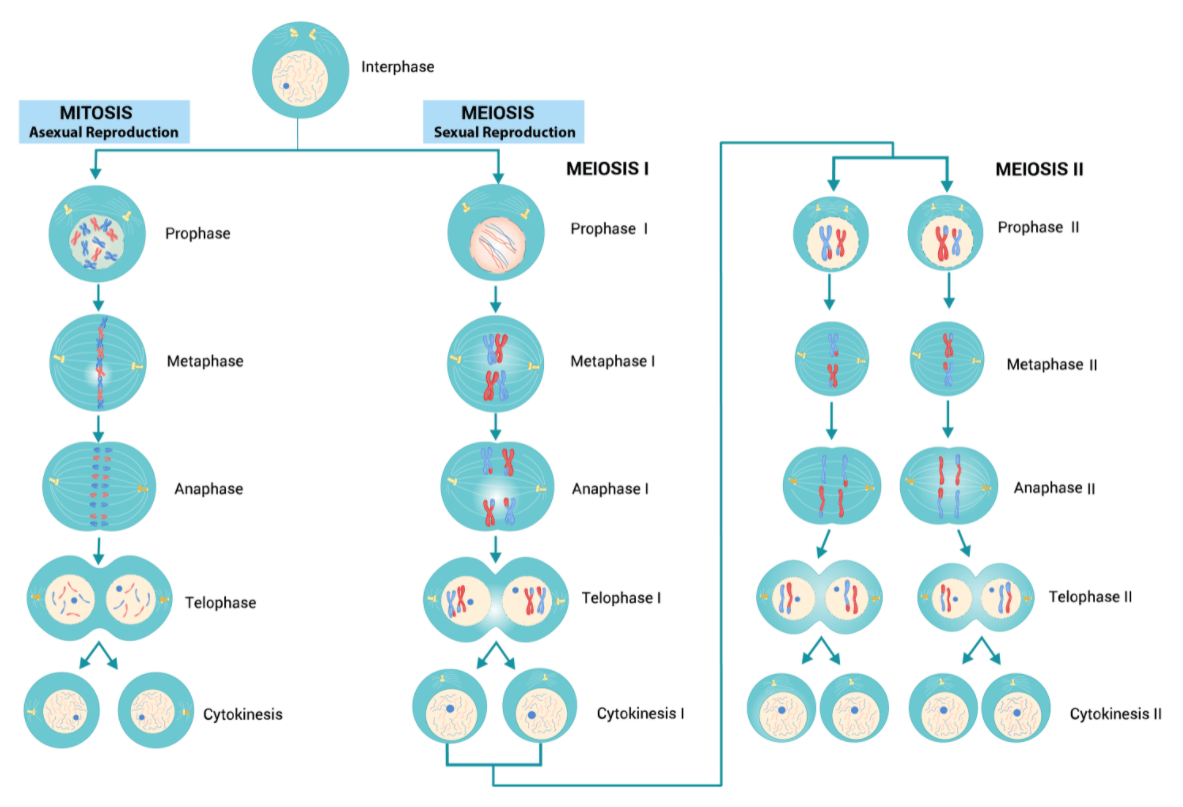 The result is four daughter cells, each with different single sets of chromosomes. The daughter cells are haploid, which means they contain half the genetic material of the parent cell. The second phase of meiosis is similar to the process of mitosis, but meiosis encourages more genetic diversity.

Thanks for watching this video on cell division! For more information, click here.

What is the difference between mitosis and meiosis?

Which process must occur before mitosis and meiosis can occur?

A cell must prepare for division by undergoing the process of interphase. During interphase, cells grow and make a copy of their DNA. The three steps of interphase are the G1 phase, S phase, and G2 phase. 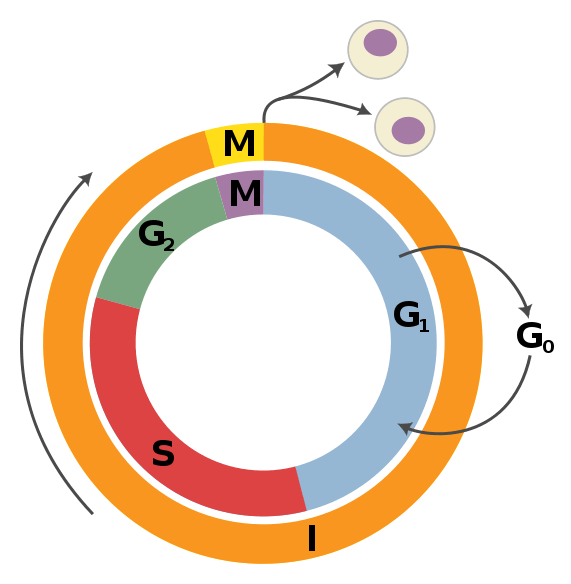 What’s evaluated at the G2 checkpoint in mitosis and meosis?

The G2 checkpoint confirms that the cell’s DNA has been fully copied or synthesized correctly and that there are no mistakes or damage within that DNA.

Why do some species employ both mitosis and meiosis?

Many organisms require both processes of cell replication because meiosis only produces germ (sex) cells, while mitosis allows an organism to grow/develop and replace damaged cells.

Where does mitosis and meiosis occur?

How many daughter cells are produced in mitosis and meiosis? 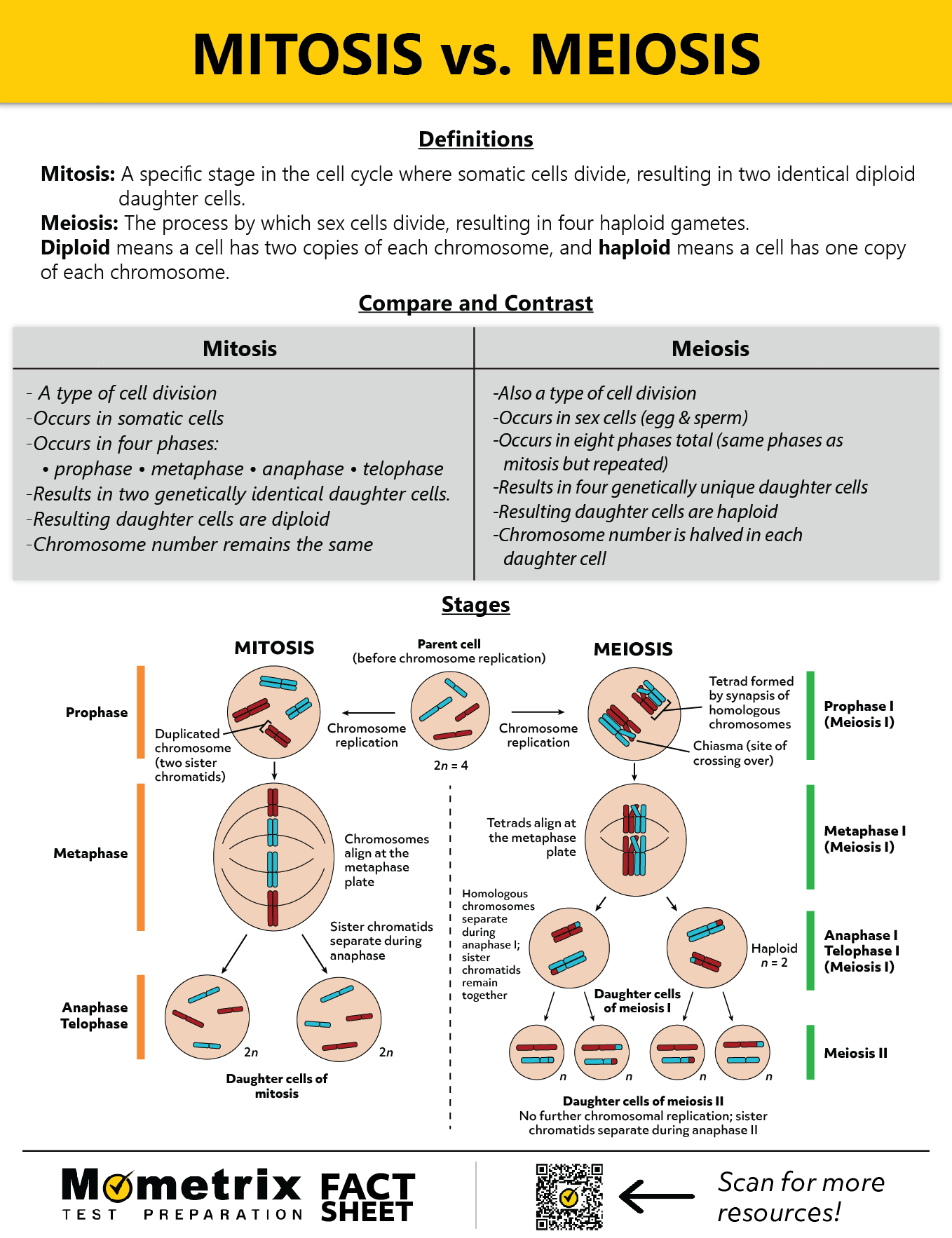