Calculation of a Percentage

Hi, and welcome to this review of percentages! As with most math concepts, the terminology that is used often holds the key to truly understanding the big idea. We’re going to cover some basic skills to help you translate the language of math so you can grasp the concept of percentages easily after a little practice.

Let’s start with the basics. What exactly is a percentage?

This can be answered by reviewing the concepts of fractions and place value.

A fraction is considered a “part of a whole.” When dealing with percentages, the whole is 100.

Converting a Decimal to a Percent

To convert a decimal value to a percent, simply move the decimal point two places to the right and be sure to use the percentage notation. Of course, there are situations when a percentage must be rounded to a particular place value. We will cover that idea in the following examples.

Let’s take a minute to apply this information to the effect of the flu.

We will convert this decimal to a percentage by moving the decimal point two places to the right, and rounding the percentage to the nearest tenth. This gives us 7.6 percent. This tells us that out of all the people tested, 7.6 percent of the tests have been positive.

With this information, we can learn even more about the effects of the virus. Let’s say that 95 percent of the people who tested positive for the flu recover. Typically, this high percentage is enough to know that “most” have recovered, but we can determine the actual number by simply multiplying the decimal equivalent of 95 percent by the number of people who tested positive:

So, the good news is that 15,520 people who tested positive made a full recovery!

As you can see, this work involves the operations of multiplication and division. The wording of the problem will let you know which operation to use. When asked to find a percentage, you will often notice the phrase, “out of”, as shown in the first example:

In the second example, the percentage of recovered flu patients is known, and the word of indicates the use of multiplication to determine the actual number:

95% of the people who tested positive for the flu have recovered.

The percent here, in decimal form, is multiplied by what is called the “base” value.

There will be times when you have the information for a straightforward multiplication problem, like the one in our second example. Other times, you will have to solve for the unknown percentage by dividing both sides of the equation by the “base.”

Let’s move on with an example of a division problem:

Unfortunately, in this hypothetical flu breakout, there also have been 894 deaths. What is the percentage of deaths of those who have tested positive? This time the equation has the number of deaths that resulted from the positive test cases. We will have to solve for the unknown percentage by dividing both sides of the equation by 16,337. 894 over 16,337 is the same as saying, “the percentage of the whole (which is 16,337) over the whole” or 894 over 16,337 is equal to our percentage.

The decimal equivalent of the fraction is 0.00575.

Note that the value in the hundredths place is 0, which indicates that the percentage will be moving less than one percent. Moving the decimal point to the right two places results in this: 0.575 percent. At this point, you will have to determine how precisely you want to represent the percentage.

Showing more decimal places is more accurate, but it is often not necessary to show more than one decimal in a percentage. Because the 7 in the next decimal place (0.575) is greater than 5, the percentage is rounded up to 0.6 percent.

The ability to process data like this is helpful to see the big picture. News of large, increasing numbers and “spikes” of flu cases can be frightening, but relating the numbers correctly is necessary to gain insight to patterns and trends in the data that are available.

Let’s move on with a few more examples of calculating and finding percentages of values.

In a group of 169,000 people, 76.5 percent of them prefer apples over bananas. How many people prefer apples?

This is a straightforward case of multiplication using the equation: Value equals percent “of” Base

Step 1: Convert the percentage to decimal form. We do this by moving our decimal point two places to the left, which gives us 0.765.

Here’s an example that you may be familiar with. When dining out, people usually leave a tip for the waitstaff averaging between 15% and 20%, depending on the quality of service.

This time, the template will look like this: Tip equals percent “of” bill. So 20 equals the percent of 82.

This calculation results in a decimal value of 0.2439. Moving the decimal point two places to the right and rounding to the nearest percent results in a generous tip of 24 percent.

For our last two examples, I want you to try to figure out the answer on your own.

The next time Mike went out for dinner with his friend, the service was terrible! Their waiter rarely attended to their table and they waited over an hour for the food to arrive after ordering. Mike decided to leave a 12 percent tip on the bill totaling $76. How much will Mike leave for the tip? Pause the video now and see if you can figure it out.

If we use our tip equation from earlier, we get that the tip is equal to 12 percent of the 76 dollars. This translates to multiplication. So our tip is equal to 12% (which when we turn it into a decimal; we move our decimal two places to the left) and we’re left with 0.12 times $76, which equals $9.12.

Last week, at a popular restaurant with a seating capacity of 120 people only had 38 customers in the building at the busiest time of the day. What percent of 120 is 38? Pause the video and see if you can solve it. Let’s see if you’re right! Use the equation 38 equals the percentage “of” 120. In this problem, solve for percent by dividing both sides of the equation by 120, like this:

If we round up to the nearest tenth, they were only at 32% of capacity at the busiest time of the day. 38 customers equals 32 percent of the total capacity of the restaurant.

That’s all there is to it! As you can see, it is important to know how to calculate percentages so we can put data into proper perspective and create statistics that make sense. I hope this review was helpful!

How do you find the percentage of a number?

How do you calculate percentage increase?

How do you calculate percentage change? 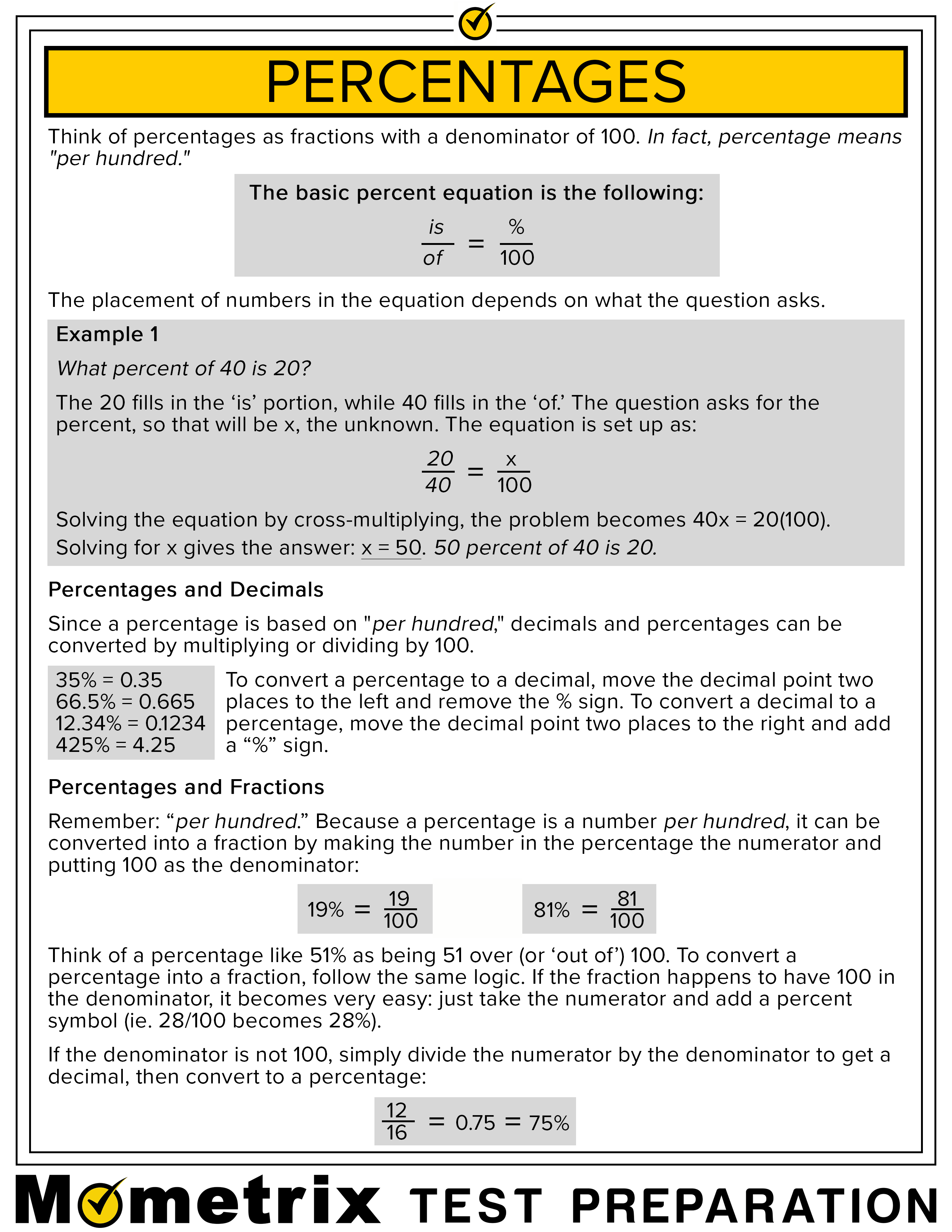 What is 79% expressed as a fraction?

What is 67% expressed as a decimal?

The correct answer is 0.67. To convert a percentage to a decimal, change the percent sign to a decimal and move it two places to the left. 67% becomes 0.67.