What is the Autonomic Nervous System?

First, the central nervous system (which includes only the brain and spinal cord).

The autonomic nervous system controls involuntary processes, such as the heartbeat and respirations, and consists of three separate divisions:

These systems that comprise the autonomic nervous system interact because many organs have nerve fibers from each of the divisions. One division, for example, may activate a response, while another may inhibit a response.

All neurons in the autonomic nervous system are efferent, or motor, neurons and their primary function is to maintain the body’s homeostasis through innervation of tissues, such as organs, glands, and blood vessels, and various systems, including the 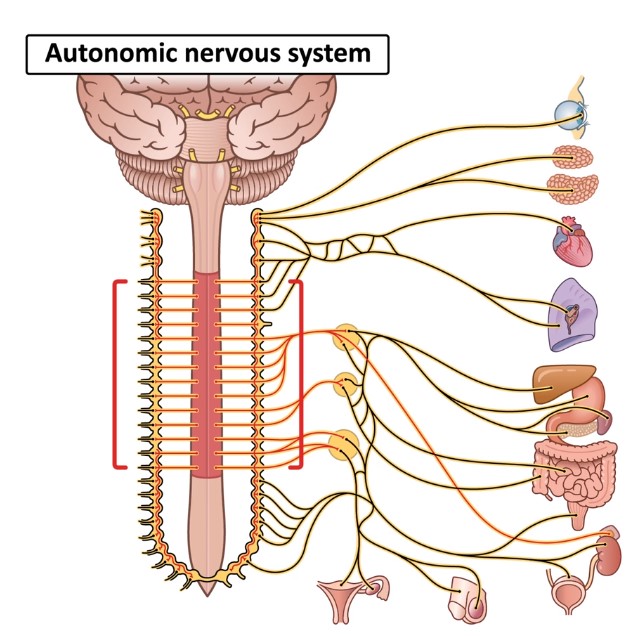 There are some exceptions to the two-neuron structure. For example, the preganglionic neurons pass through ganglia and synapse directly with the medulla tissue in the adrenal glands to stimulate production of epinephrine and norepinephrine. 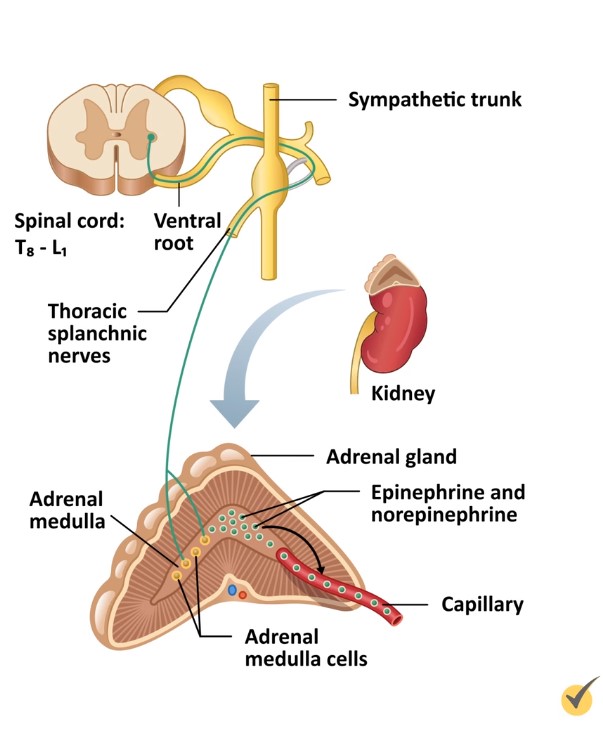 The sympathetic nervous system activates the “fight or flight” response in the body, and the body goes into a protective mode: 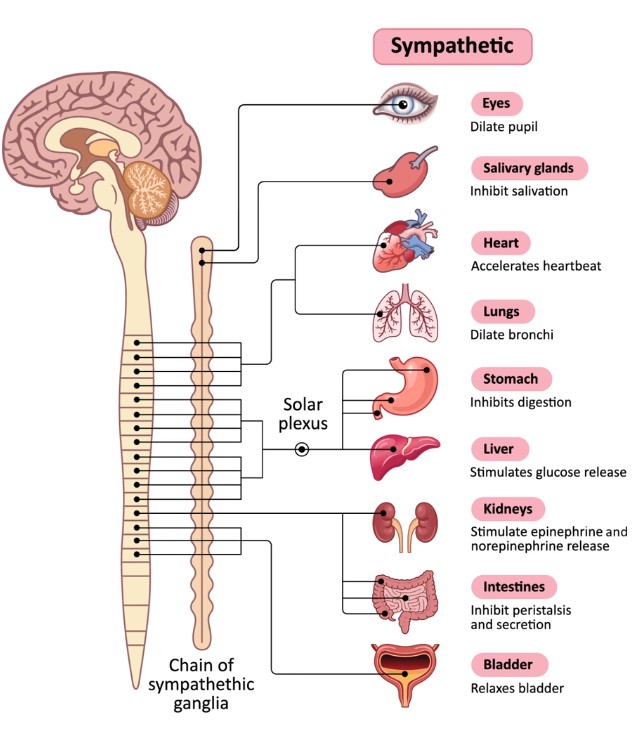 When sympathetic impulses decrease, the vessels dilate; when impulses increase, they constrict.

The parasympathetic nervous system maintains the body systems in their normal state: 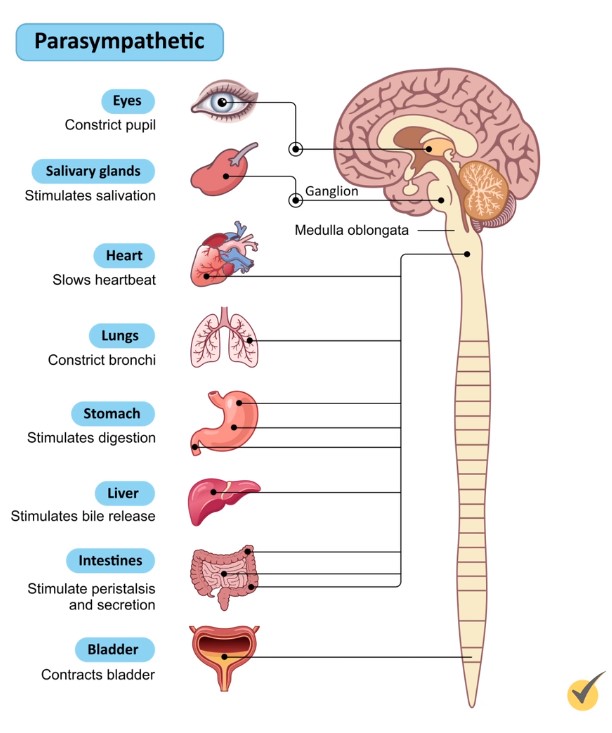 The enteric nervous system, which comprises a web-like structure of neural circuits, regulates digestion with neurons embedded in the entire length of the gastrointestinal system, from the esophagus to the anus.

The enteric system can function independently, but can also be influenced by the sympathetic and parasympathetic nervous systems.

Because of its ability to function independently of the central nervous system, the enteric nervous system is sometimes referred to as the “second brain” of the body. 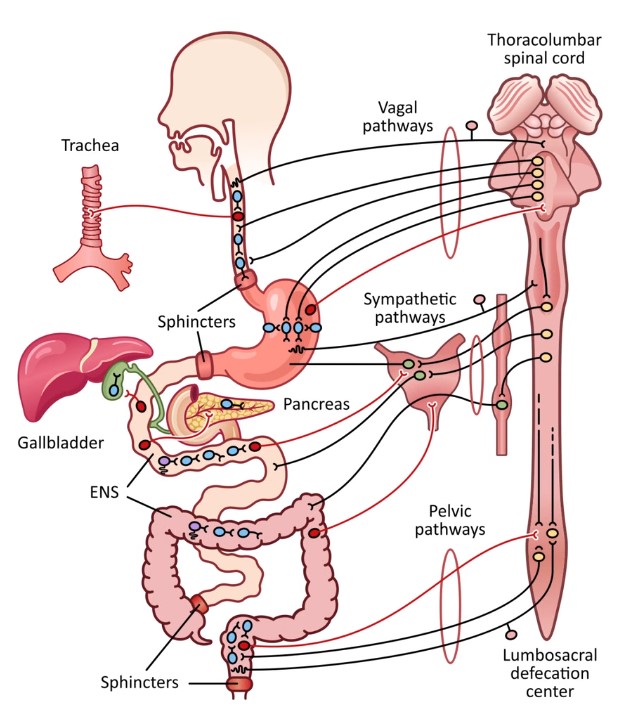 There are many disorders associated with the autonomic nervous system. Some of these disorders occur as a secondary effect of another disorder.

For example, autonomic neuropathy or dysautonomia, a condition with impairment of nerves that control involuntary processes, is often associated with diabetes mellitus or alcoholism but may also occur with a number of different disorders, including Parkinson’s disease, HIV/AIDS, Lyme disease, and nutritional deficiencies. Symptoms may vary widely depending on which nerves are most affected, but may include postural hypotension, sexual dysfunction, gastrointestinal dysfunction, and urinary dysfunction.

Multiple system atrophy is a rapidly progressive neurological degenerative disease of the autonomic nervous system for which there is no cure. Multiple system atrophy usually includes postural hypotension and other symptoms associated with impaired autonomic function, including sexual dysfunction, GI dysfunction, and urinary dysfunction. There are two types of multiple system atrophy. The Parkinsonian type is characterized by symptoms similar to Parkinson’s disease, such as muscle rigidity, bradykinesia, and tremors. The cerebellar type is characterized by ataxia and may include dysarthria and dysphagia as well as visual disturbances.

Postural orthostatic tachycardia is another disorder that is sometimes associated with overactivity of the sympathetic nervous system.

Horner syndrome may be a congenital or acquired disorder and results from impairment of cervical sympathetic nerves, which control some functions of the face and eyes. Typically, an eye and one side of the face is affected. The affected eye exhibits ptosis (or drooping of the upper eyelid) and pupil constriction, and sweating is absent on that side of the face. Vision is usually not impaired.

Triple A syndrome is an inherited disorder associated with impairment of the autonomic nervous system. Triple A syndrome is characterized by achalasia (which is impaired functioning of the esophagus), Addison’s disease, and alacrima (reduced or absent production of tears). Many of the symptoms associated with this disorder relate to dysfunction of the autonomic nervous system, including impaired thermoregulation, unequal pupils, sweating abnormalities, labile blood pressure, and impaired digestion. In addition, this disorder may include multiple neurological abnormalities, such as impaired cognition, dysarthria, microcephaly, movement disorders, and peripheral neuropathy.

The autonomic nervous system is critical to the functioning of the body, as it controls the automatic processes that are necessary to support life.

That’s all for this review. Thanks for watching, and happy studying!

by Mometrix Test Preparation | This Page Last Updated: May 13, 2022