Hi, and welcome to this review of atomic models! Today, we’re going to be discussing the atomic model and the experiments that led to its development. We’ll start way back in 400 BC when the Greek philosophers postulated that matter was made up of small, discrete units. Then, we’ll launch forward in time to the 1800s and learn how the modern description of the atom was derived. Let’s get started!

Before we begin, we need to consider two things.

First. As we go through the history, try to imagine what it was like to live in the different time periods. What if you didn’t have a smartphone or computer or any modern instrumentation to examine matter? How would you even begin going about proving the existence of the atom and describing its subatomic structure? Pretty unimaginable, right? These were amazing scientists back in the day.

And second. While these were amazing scientists, they did make mistakes. They ran experiments and came to conclusions. Then they made new hypotheses based on those conclusions but weren’t really able to test them or didn’t even realize they needed to be tested. As time went on, new scientists examined those findings, found inconsistencies, ran new experiments, and came to new conclusions. This is all part of the scientific process and it makes science exciting. So why not just ignore the older, incorrect models? Because it is important to note that these early scientists actually got some things right and understanding the things that they got wrong can also be instructive. And, taking this historical look at the development of the atomic model is a great way to learn about the scientific method. The important thing to remember is that you should make an effort to mentally label which theories are wrong. Sometimes just by hearing something, even if you know it’s wrong, it will stick in your brain as true. So, try to be careful and mentally mark which parts of each theory were right and which were wrong!

Alright, with that, let’s dive into the exciting history of the atomic model!

We’ll begin our story 2,400 years ago with the Greek philosopher Democritus.

He reasoned that all materials are made up of small, uncuttable units. He called them atomos, meaning “indivisible,” which is where we get our modern word atom. A few things to note about his work: Democritus was a philosopher, not a scientist, and he didn’t conduct physical experiments in the way that we do today. Instead, he conducted more of a thought experiment. He considered a stone. 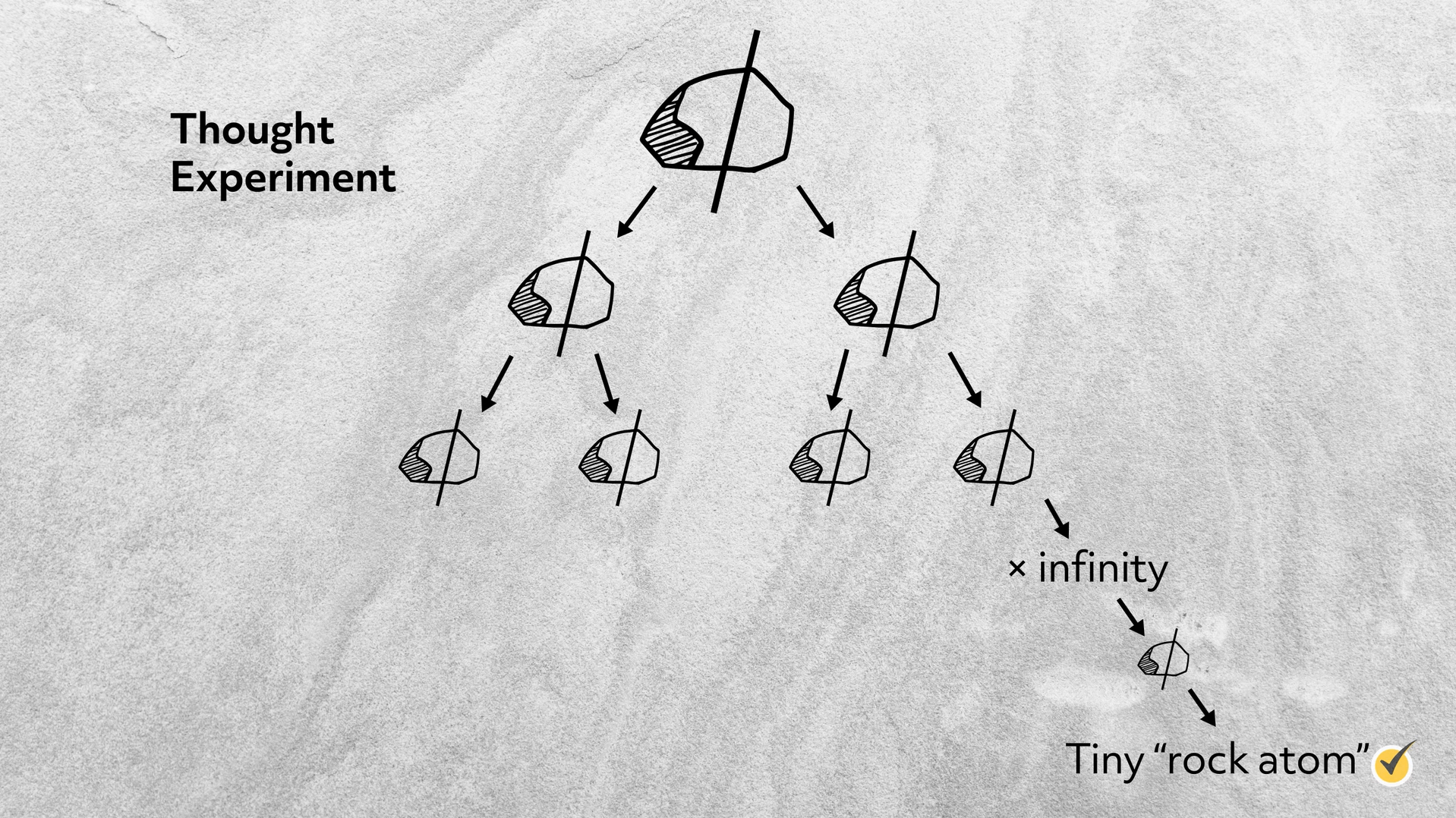 It took another 2,200 years for the first big advancement in our understanding of the atomic model.

Around 1803, John Dalton laid out what, at the time, was a comprehensive atomic theory meant to explain all matter and its properties. Dalton gathered much of his data from gas-phase experiments and is well known for the law of partial pressures.

Building off of these established laws and his own experimentation, Dalton presented his atomic theory:

Dalton envisioned the atom to be similar to a billiard ball, completely solid and indivisible. While this explained why mass was conserved during chemical reactions and how atoms rearranged in whole units to form new compounds, he had no way of knowing that subatomic particles existed, which means that Dalton’s theories had a few drawbacks and fallacies.

First, we now know that in nuclear reactions atoms can convert to different elements. Second, not all atoms of the same element have the same mass, as different isotopes exist. And third, Dalton’s theory could give no insight into why atoms bonded in the ways and proportions observed. That level of understanding wouldn’t come until subatomic structure was understood. But still, this was a solid framework for future scientists to build on.

That next big step came one hundred years later in 1897 when J. J. Thomson discovered the electron and began to investigate subatomic structure. He established its existence in cathode ray experiments.

I’ll spare you the really technical details of a cathode ray, but briefly, it is a stream of electrons ejected from a negatively charged cathode and attracted to a positively charged anode housed in a vacuum chamber. 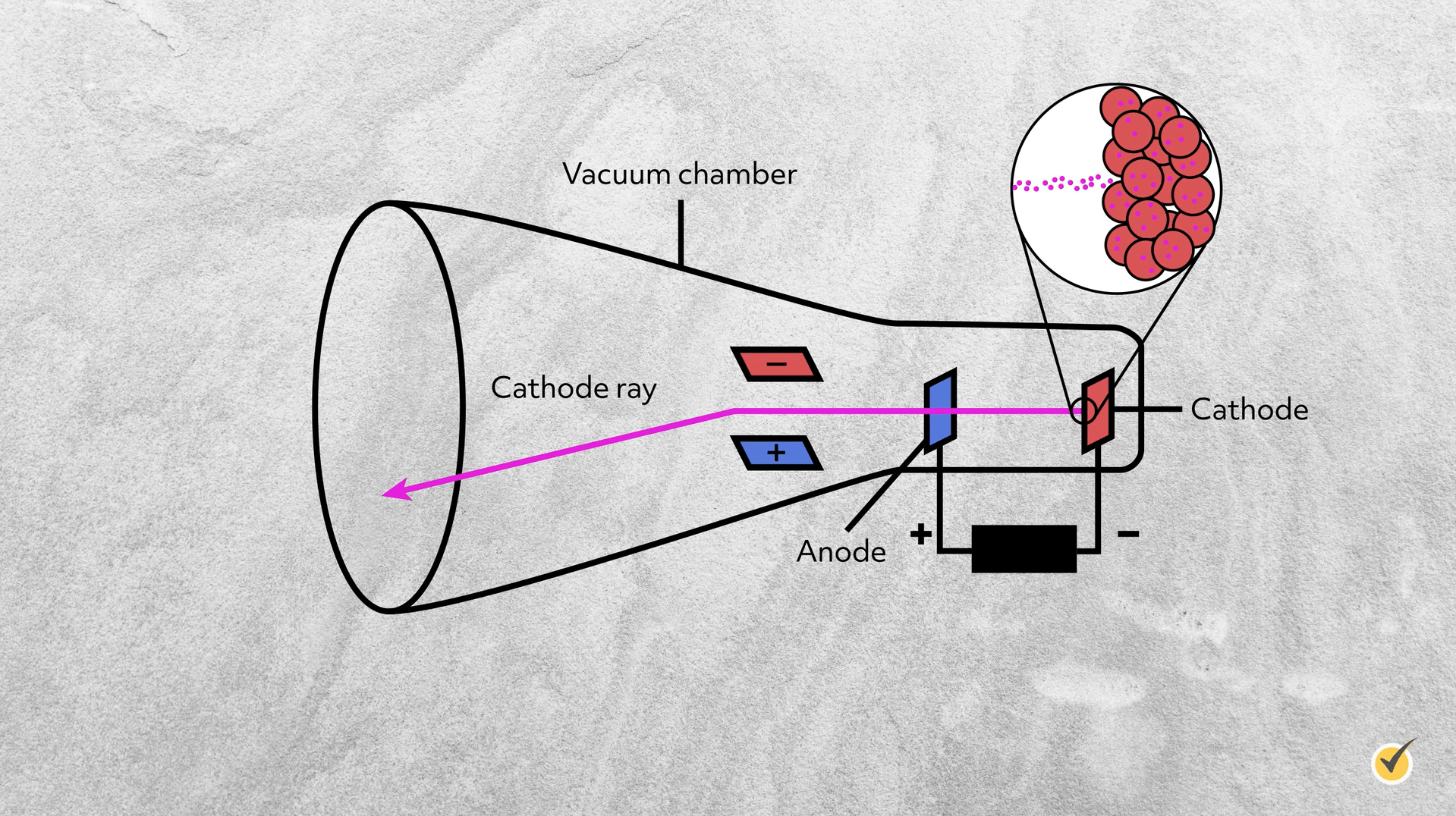 However, in the early 1900s, scientists were heatedly debating what this ray consisted of. The ray responded to electric and magnetic fields, leading them to conclude that the ray was negatively charged. Thomson then determined that the ray was made up of particles that were 1,000 times lighter than a hydrogen atom. He reasoned that, because these particles were smaller than atoms but were coming from materials made of atoms, that atoms must be made up of smaller particles! Thomson named these particles corpuscles, a name soon replaced by electron.

Furthermore, knowing that the atoms are neutral, Thomson concluded that there must also be a positive charge in an atom as well. Without any experimental evidence, he envisioned the atom as a diffuse sphere of positive charge with electrons randomly distributed inside. This became known as the plum pudding model, named after a popular English dessert, in which plums are baked into a cake. 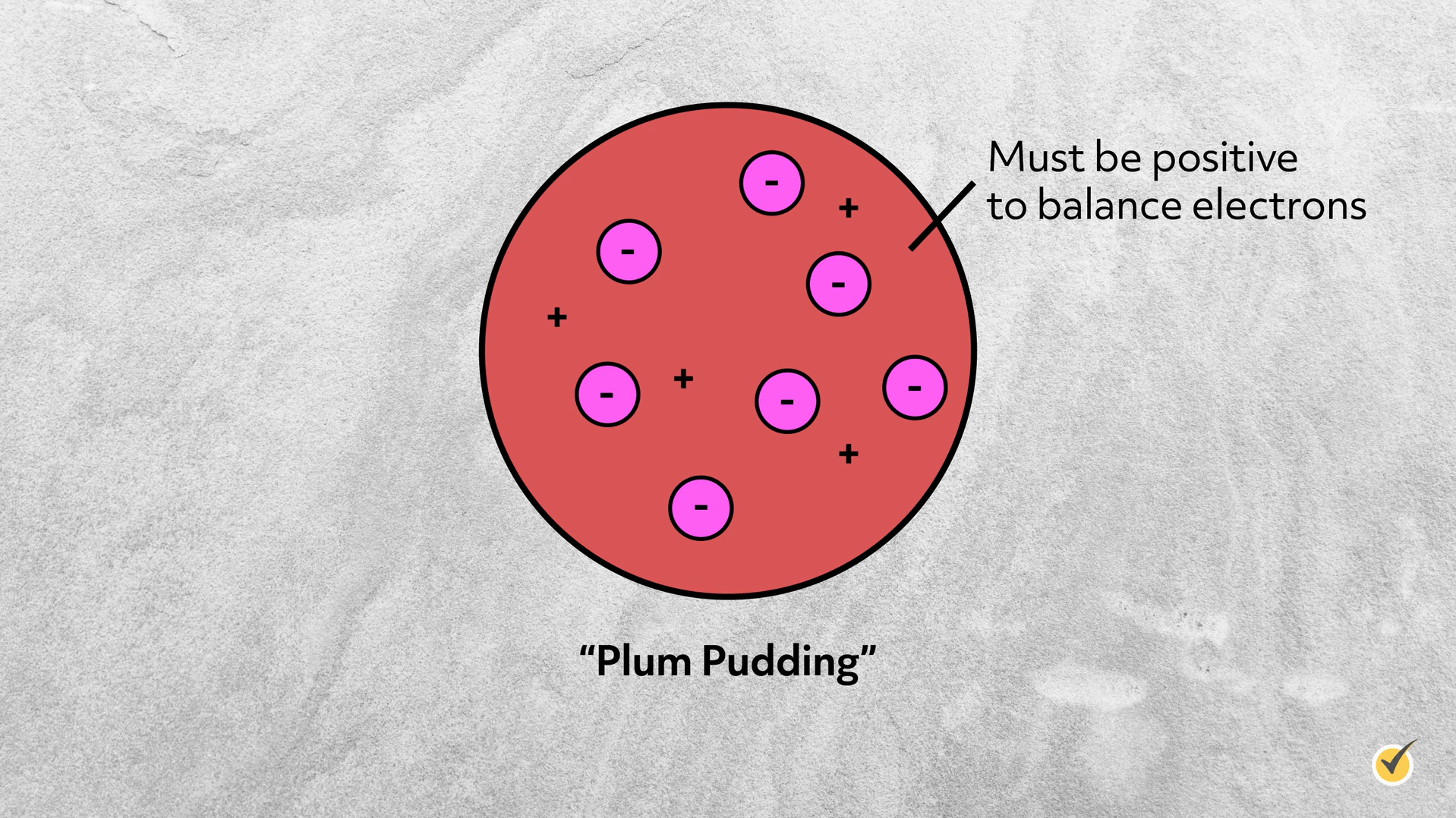 This was a huge step forward in understanding subatomic structure as it established the existence of subatomic particles. But obviously, without knowledge of the nucleus, Thomson could not have predicted that atoms are mostly empty space, nor could he have predicted electron configuration.

It didn’t take much longer for physicists to illuminate the inner-workings of the atom.

Just a few years later in 1911, Ernest Rutherford and his colleagues Hans Geiger and Ernest Marsden discovered the nucleus by shooting gold foil with alpha particles (high-speed, positively charged helium ions). Here are the basics of that experiment.

They placed a thin sheet of gold foil in front of a radiation source and in the center of a ring lined with zinc sulfide, which flashed when struck by an alpha particle. In this way, they could track the location of alpha particles after they struck the gold foil. 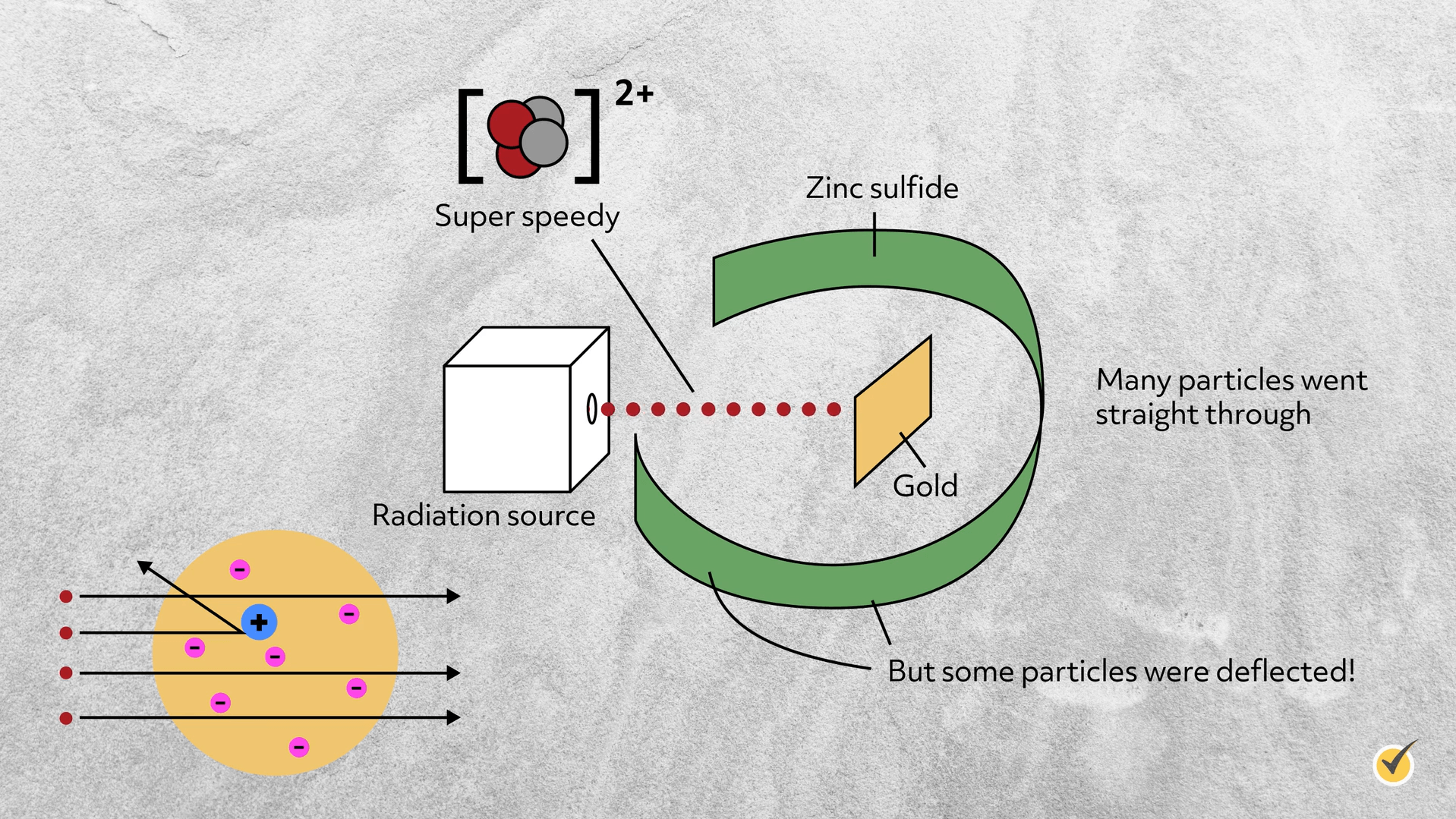 Since they had no reason to believe that the plum pudding model was wrong, they hypothesized that most of the alpha particles would pass straight through the gold atoms unperturbed, theorizing that the positive charge was so diffused that it wouldn’t repel them.

Instead, they discovered that while most of the alpha particles did travel straight through the gold atoms, a small number were significantly deflected and some were even reflected straight back towards the radiation source.

This, of course, was not at all consistent with the plum pudding model. So, Rutherford proposed that the positive charge of the atom was concentrated in a heavy mass at the center, while the rest of the atom was mostly empty space.

Rutherford named the center mass the nucleus and the constituent positive particles protons—it would be another 20 years before James Chadwick discovered the neutron. While this experiment established that atoms were mostly empty space, it didn’t provide any data on how the electrons were configured around the nucleus. However, Rutherford and his contemporary scientists supported the theory that electrons circulated the nucleus in a way similar to how the planets orbit the sun in our solar system; thus, this was the “planetary model,” generating one of the more popular visualizations of subatomic structure. 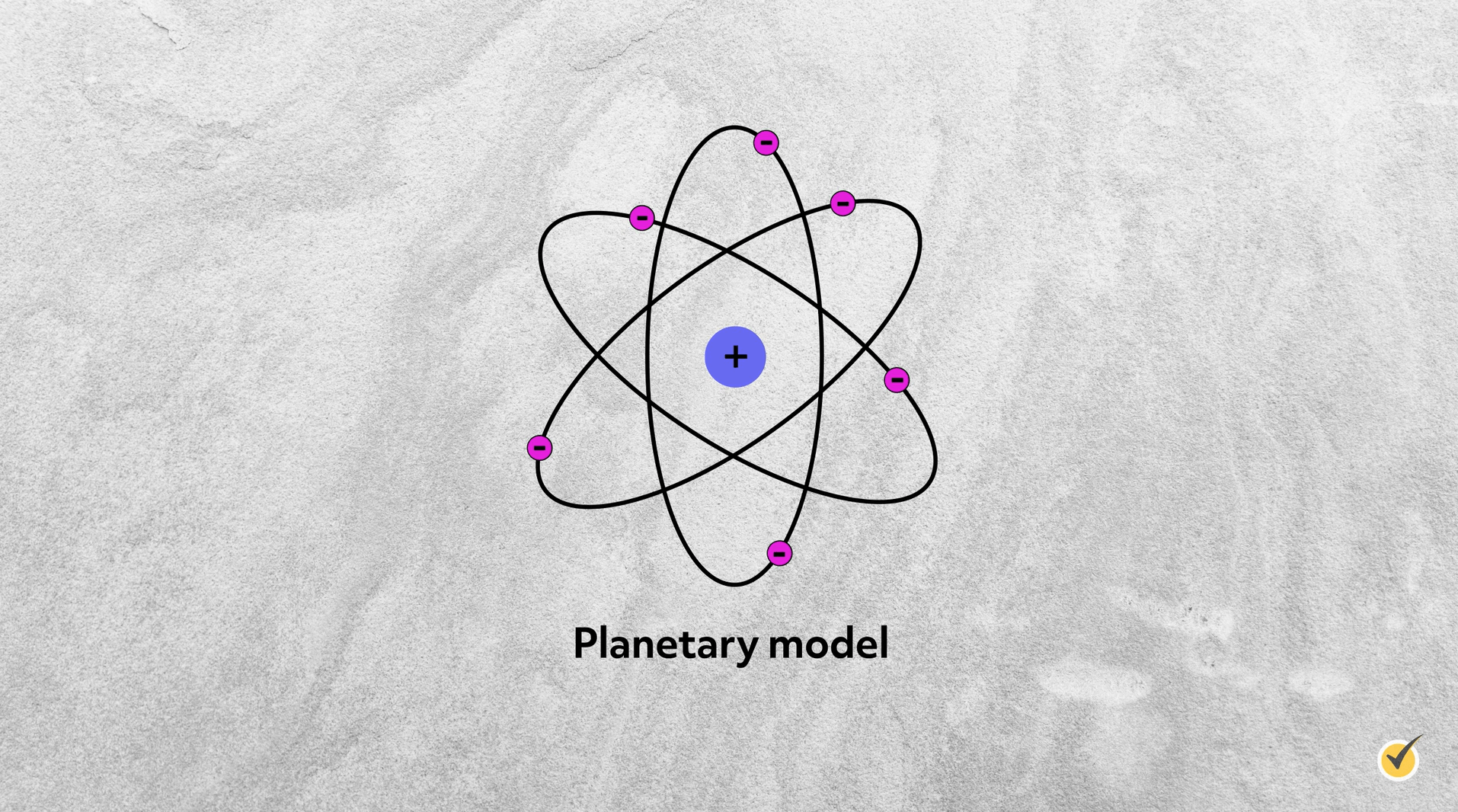 However, this proposed electron configuration was problematic, as classical physics predicted that accelerating electrons would emit electromagnetic waves, lose energy, and crash into the nucleus, making all atoms unstable.

Just two years later, Niels Bohr, while working with Rutherford, ignored some tenants of classical electromagnetism and incorporated the new developing theory of quantum mechanics into the atomic model. He proposed that electrons orbit the nucleus, but only on specific radii with specific energies. 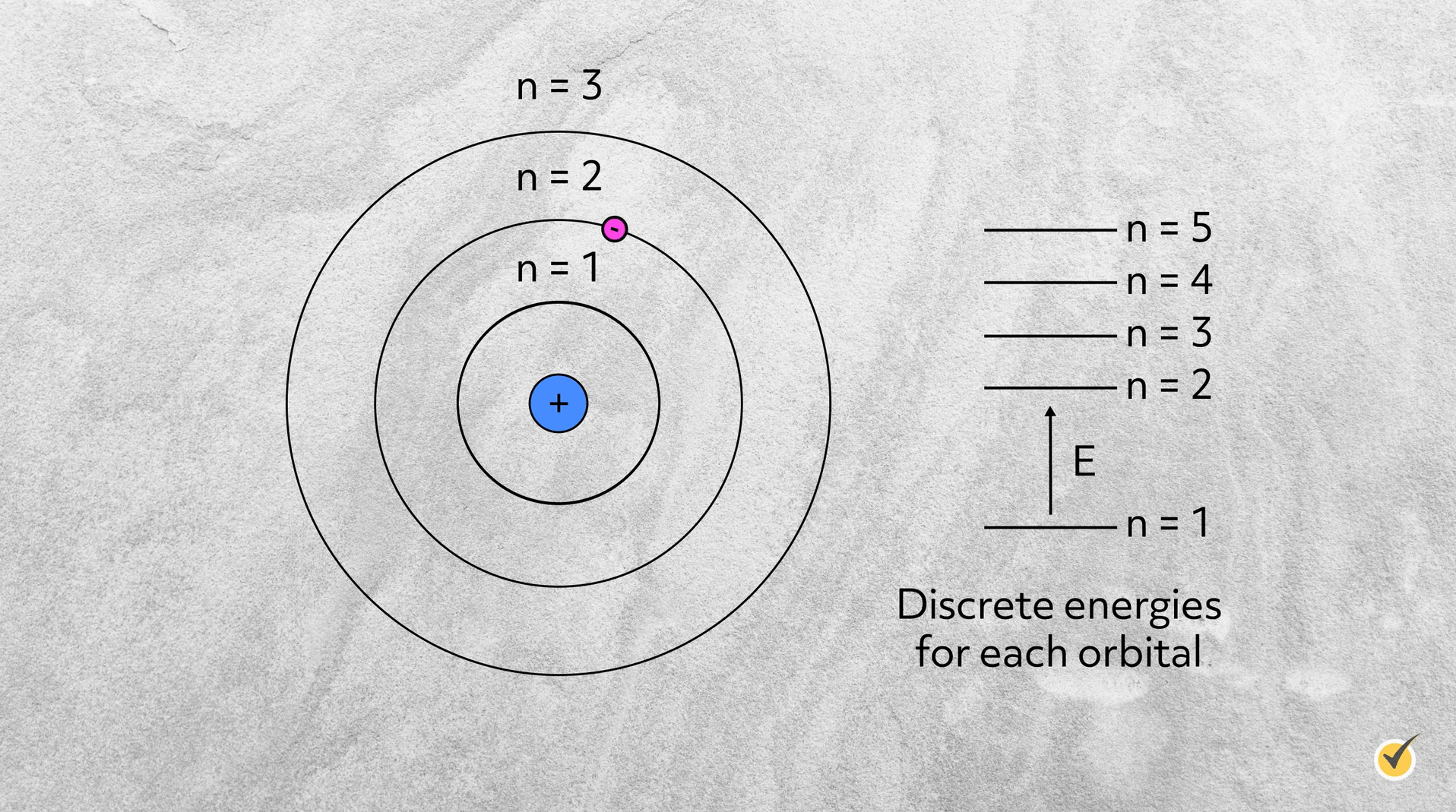 This model was successful in predicting the discrete light emissions from hydrogen, meaning that, rather than emitting a continuum of light, hydrogen atoms only emit very specific wavelengths of light. These wavelengths turned out to be the exact energy needed to excite electrons between the various levels of Bohr’s hydrogen model.

Unfortunately, Bohr’s model failed to predict the emission spectrum of helium, the next simplest atom. It turns out, while Bohr’s semi-classical/semi-quantum approach worked for single-electron systems, it couldn’t deal with multi-electron systems and, at its core, didn’t conceptualize electrons correctly.

That came with the full-on birth of modern quantum mechanics in 1924.

Louis de Broglie proposed that all moving particles exhibit some wave-like behavior. This behavior becomes more pronounced for smaller particles, so is significant for electrons (but not so much for a human). This led Erwin Schrödinger to visualize the electrons not as particles orbiting the nucleus, but rather as waves. So rather than a single point mass, the electrons were distributed throughout 3D space around the nucleus. Schrödinger’s model is perhaps the most abstract of all the atomic models, as it determines where an electron is likely to be around the nucleus, not where it is exactly. 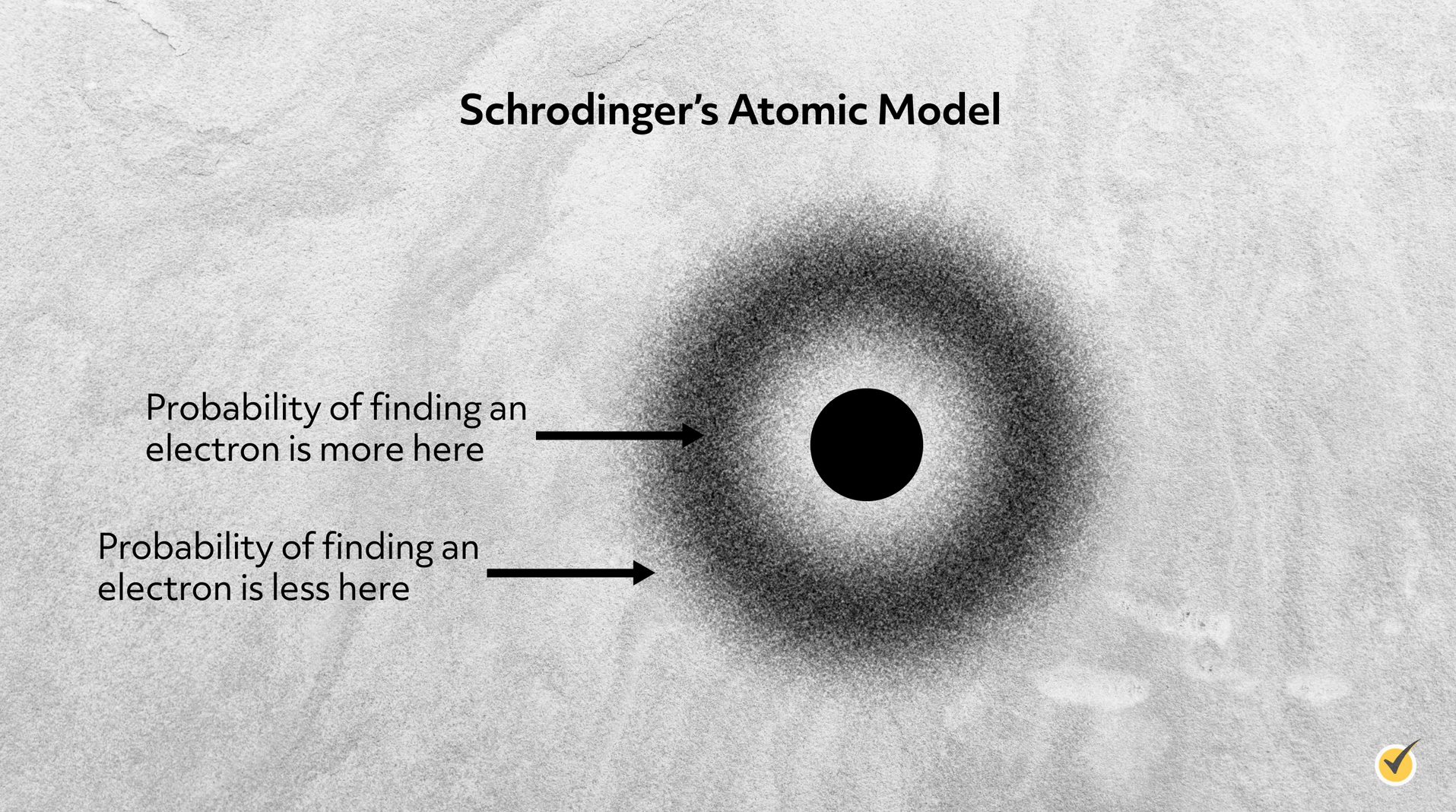 Many of these ideas are counterintuitive to what we observe in our everyday lives and may feel strange. Even scientists at the time received these ideas with some disbelief. But the mathematical solutions to Schrödinger’s equation, known as wave functions, accurately experimental results with extreme accuracy, so quantum mechanics was accepted.

Schrödinger’s representation of the atom has been widely accepted and validated, but this probably isn’t the end of our story. All of these scientists throughout history thought that they had the correct description of the atom, only to be proved wrong. So, chances are there are still breakthroughs ahead of us.

Before we go, let’s go over a few review questions to see what you remember.

1. Democritus’ thought experiment of the atomic model involved breaking a stone in half, breaking those halves in half, and continuing the process. What, in his mind, would the end result of this process have been?

2. What particle that is well-known today was discovered by J. J. Thomson’s cathode ray experiments?

The correct answer is A.

After debating what the cathode ray consisted of, Thomson determined that the ray was made up of particles that were 1,000 times lighter than a hydrogen atom. He originally called them corpuscles and the name was later changed to “electron.”

3. What were the results of Rutherford’s experiments where he struck a thin sheet of gold foil with alpha particles?

That’s it for this review! Thanks for watching, and happy studying!