Astronomy is a broad scientific topic that includes all objects beyond the Earth, as well the Earth itself. The word astronomy has Greek roots meaning “the laws of the stars.” Astronomers study everything from the soil composition of Mars to the fate of the Universe. In this video, we’ll take a look at some of the subfields of astronomy.

In modern times, we use all kinds of light, including wavelengths that our eyes cannot see. Observational astronomers might refer to themselves by the wavelength of light they primarily work in, so you might see terms such as “radio astronomer” or “X-ray astronomer.” In the past two decades, astronomers have been working across the wavelengths of light more often, giving rise to the term “multi-wavelength astronomy.”

Galileo was also the pioneer of the next astronomical subfield, planetology. Planetology is the study of planetary terrains, interiors, and atmospheres. An example of planetology is when Galileo drew images of the craters on the Moon. In the 19th century, observational astronomer Percival Lowell sketched maps of Mars. In the modern era, experts in planetology have access to robotic explorers on the Moon and Mars, and orbiters around many of the other planets in our solar system. Planetologist and science communicator Carl Sagan helped plan the first robotic missions in our solar system, beginning in the 1960s. This legacy continues today with ongoing robotic orbiter and lander programs, such as the recent Perseverance lander and Ingenuity drone currently on Mars, as well as the Juno spacecraft currently orbiting Jupiter.

Planetology also includes the study of comets and asteroids. Eugene Shoemaker, co-discoverer of a comet that struck Jupiter in 1993, was one of the first geologists to study impact craters on Earth and the objects that made them, called meteorites. Increasingly, planetologists have turned their eyes toward planets that orbit stars other than the Sun. Planetologists are often concerned with the location of liquid water on other planets, because its presence is thought to indicate the possibility of life. To date, however, no life has been found anywhere except on Earth. 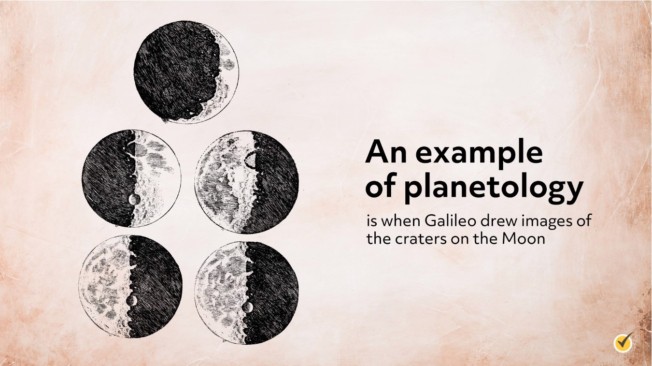 Instrumentation is the subfield of astronomy that is concerned with developing new telescopes and the technology that allows telescopes to work properly. This includes both ground-based and space-based telescopes. For instance, the astronomers who designed the recently launched James Webb Space Telescope work in this field.

In addition to telescopes, astronomers in the instrumentation subfield work on developing cameras for telescopes, and software to interpret the information from these cameras.

Orbital dynamics is the study of gravitational interactions between objects in space. From the time gravity was described by Sir Isaac Newton in 1687, the concept was applied to our understanding of planets. Today, this field includes analyzing the orbits of satellites and spacecraft, and many orbital dynamicists are interested in how planets influence each other through gravity. Sometimes, a planet’s gravity can send an asteroid flying out of the solar system or toward the Sun—it can even create or destroy rings. An orbital dynamicist may wonder why Saturn has rings, then use computer programs to simulate their formation. Because this field relies on computer simulations, it is considered a theoretical field. A theoretical field is one that involves fewer direct measurements and more simulations.

Solar physics is the field of astronomy concerned specifically with the Sun. The information gained from studying our closest star can then be applied to distant stars. Solar physicists are the only astronomers who need to take their images when the Sun is in view. One aspect of the Sun that they study is the boiling outer layer of the Sun, called the corona. This is examined using an instrument called a coronagraph, which covers up the main body of the Sun. This is done so that solar physicists can see particles streaming away from the Sun.

Astrophysics is often considered synonymous with astronomy, but astrophysics is specifically the application of physics to understanding objects in space. For instance, an observational astronomer may document a star dimming, while an astrophysicist is preoccupied with describing why it is dimming using the principles of physics. This subfield is broadly divided into three parts: particle, galactic, and extragalactic astrophysics. Many astronomers today are astrophysicists in practice, which is why these words have become synonyms.

Particle astrophysics overlaps with the field of physics known as particle physics. This is the study of the building blocks of everything. Most things are made of molecules, which themselves are made of atoms. Inside of atoms, we find three common kinds of particles: protons, electrons, and neutrons. There are other particles around us as well, many of which are less common. Particle physics is concerned with finding all the kinds of particles and measuring their properties. Particle astrophysics is the field that uses the properties of these particles to learn more about space. Many unusual and hard-to-detect particles are made in explosions of stars. These supernova explosions send rare particles to the Earth and allow particle astrophysicists to understand more about the most high-energy explosions around.

Galactic astrophysics is concerned with objects within our galaxy. Since planets within our galaxy are already included in the field of planetology, galactic astrophysicists are mainly concerned either with stars or with the dust and gas between the stars. For instance, in 1925, Cecilia Payne-Gaposchkin used information from the physics of elementary particles to determine the chemical composition of the stars. Astrophysicists who study stars also study their deaths, during which they might turn into unusual objects like black holes. Astrophysicist Stephen Hawking became famous for investigating the physics of the extreme environment near black holes.

Extragalactic astrophysics is concerned with objects outside of our galaxy. This mostly includes other galaxies, as well as groups of galaxies. This field of study was brought about by the efforts of astronomers to understand and classify objects they had seen in space. There were many differing views as to whether these objects were a part of the Milky Way or represented universes outside of the Milky Way. The classification of these objects, called “spiral nebulae,” was debated for many years, and, in 1920, Heber Curtis posited that they were in fact galaxies within their own right. This was not proven until Edwin Hubble used a telescope in 1923 to take images of the Andromeda Nebula, which allowed him to determine the size of Andromeda in relation to the size of the Milky Way. This definitively proved that the spiral nebulae, which astronomers had seen for years, were, in fact, objects like the Milky Way, not objects inside the Milky Way. Edwin Hubble determined the distance to these other galaxies in 1929. Later, Vera Rubin measured the mass of galaxies using the physics of light and motion.

Cosmology is the subfield of astronomy that goes beyond even extragalactic astrophysics. It is the subfield that is concerned with the past, present, and future of the universe as a whole. While other fields of astronomy study things within the universe, astronomers in this field study how the universe came to exist in an event known as the Big Bang. Cosmologists use information from extragalactic astrophysicists to show how the universe is changing with time. Cosmology as a science traces its origin to the 1930s discovery by Edwin Hubble and Vesto Slipher that the universe was smaller in the past and is getting larger as it expands with time. Modern cosmologists often study how fast the universe is expanding. They are also interested in what caused both the Big Bang and the expansion of the universe.

Importantly, astronomy is not astrology. Astrology is the belief that the position of the planets, Sun, or other stars (specifically certain constellations) can control things occurring on the Earth. For instance, when you look up your “sign” in a magazine, this is astrology. An astrologer might tell you that the stars say you are about to find money or fame, but an astrologer does not study what a star is made of. To an astronomer, the location of stars in the sky is considered random and has no bearing on earthly events. The constellations provide a map for observational astronomers to find an object they are looking for, but otherwise they are human-made artificial boundaries on the sky.

Interestingly, the stars in a constellation are not usually near each other in space. One may be relatively close to Earth, then the next may be thousands of lightyears away. Stars each have random motions as well, so in a few million years, the night sky we now know will look very different. Astronomy has shown that the locations of the stars or planets do not have an effect on day-to-day events of human life. That does not mean that stars don’t have an emotional effect on humans, though. Most astronomers entered the field after experiencing the beauty of the night sky. An astronomer is simply motivated by the desire to know more about the beautiful sky above us.

That’s all for this video. Thanks for watching and happy studying!