Welcome to this video tutorial over antiepileptics. These drugs are commonly prescribed and used to treat seizures, mood disorders, and even nerve-related pain. Today we are going to learn about when these medications are used, how they work, and some common side effects.

Antiepileptics, also known as anticonvulsants, are chemical compounds that act on the central nervous system to treat various forms of epilepsy, personality disorders, and neuropathic pain. Before we talk about the pharmacodynamics of these drugs, lets first review what Epilepsy is to better understand how these drugs work.

Epilepsy is the term used to describe a group of neurological disorders arising from an overabundance of excitable neurons in the brain. This leads to recurrent seizures that can produce various symptoms such as periods of unconsciousness, altered mental status, and violent convulsions. This phenomenon results from a variety of causes such as congenital defects, head trauma, stroke, cancer, genetic disorders, or hypoxia at birth. There are generally three types of seizures: focal, generalized and mixed. Focal seizures can be either simple or complex. Simple focal seizures manifest from a small area of the brain and present with discrete symptoms such as twitching and sensory discomfort. In these patients, no loss of consciousness is present. In complex focal seizures, there is a loss of consciousness and the symptoms are more noticeable. These patients present with a fixed gaze and are generally motionless. On the contrary, generalized seizures manifest from neuron hyperexcitability from both brain hemispheres and come with more symptoms. Tonic-clonic seizures, petit mal, atonic, myoclonic, status epilepticus, and febrile seizures make up this sub-category. 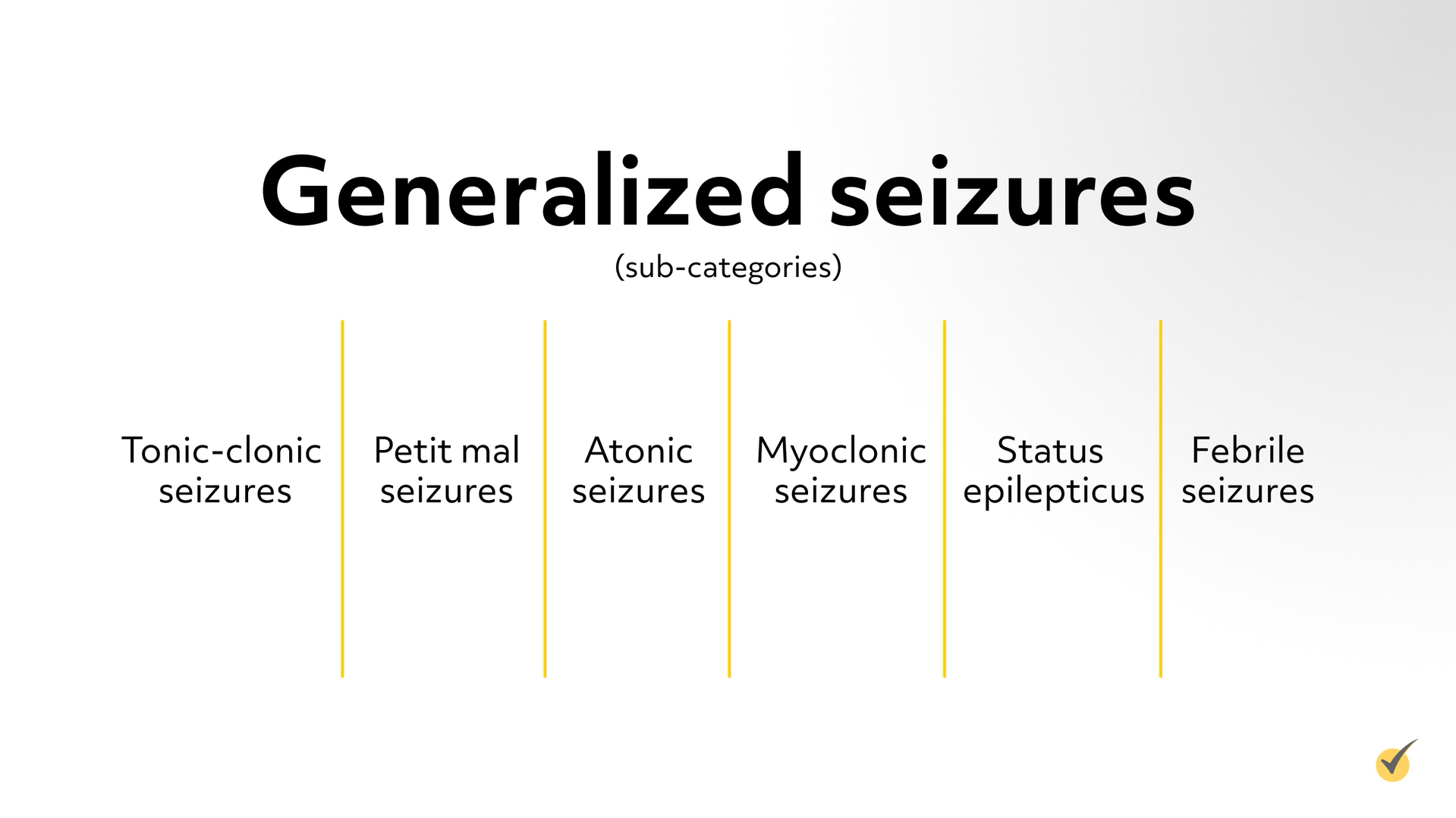 In tonic-clonic seizures, major convulsions are characterized by muscle rigidity (tonic) followed by muscle jerks (clonic phase). Petit mal seizures, also known as absence seizures, present as a loss of consciousness for a brief amount of time, about 10-30 seconds, and may involve mild motor activity. Atonic seizures are characterized by a sudden loss of muscle tone where myoclonic seizures consist of a sudden muscle contraction. Status epilepticus is a medical emergency and is defined as a seizure that lasts over 15-30 minutes, or a series of recurrent seizures where the patient loses consciousness. Lastly, febrile seizures are associated with fever and are common among young children. These patients normally do not require life-long treatment with antiepileptics.

So how do we treat these patients? Antiepileptics work by suppressing the discharge of excitable neurons and the spreading of seizure activity to other areas of the brain. 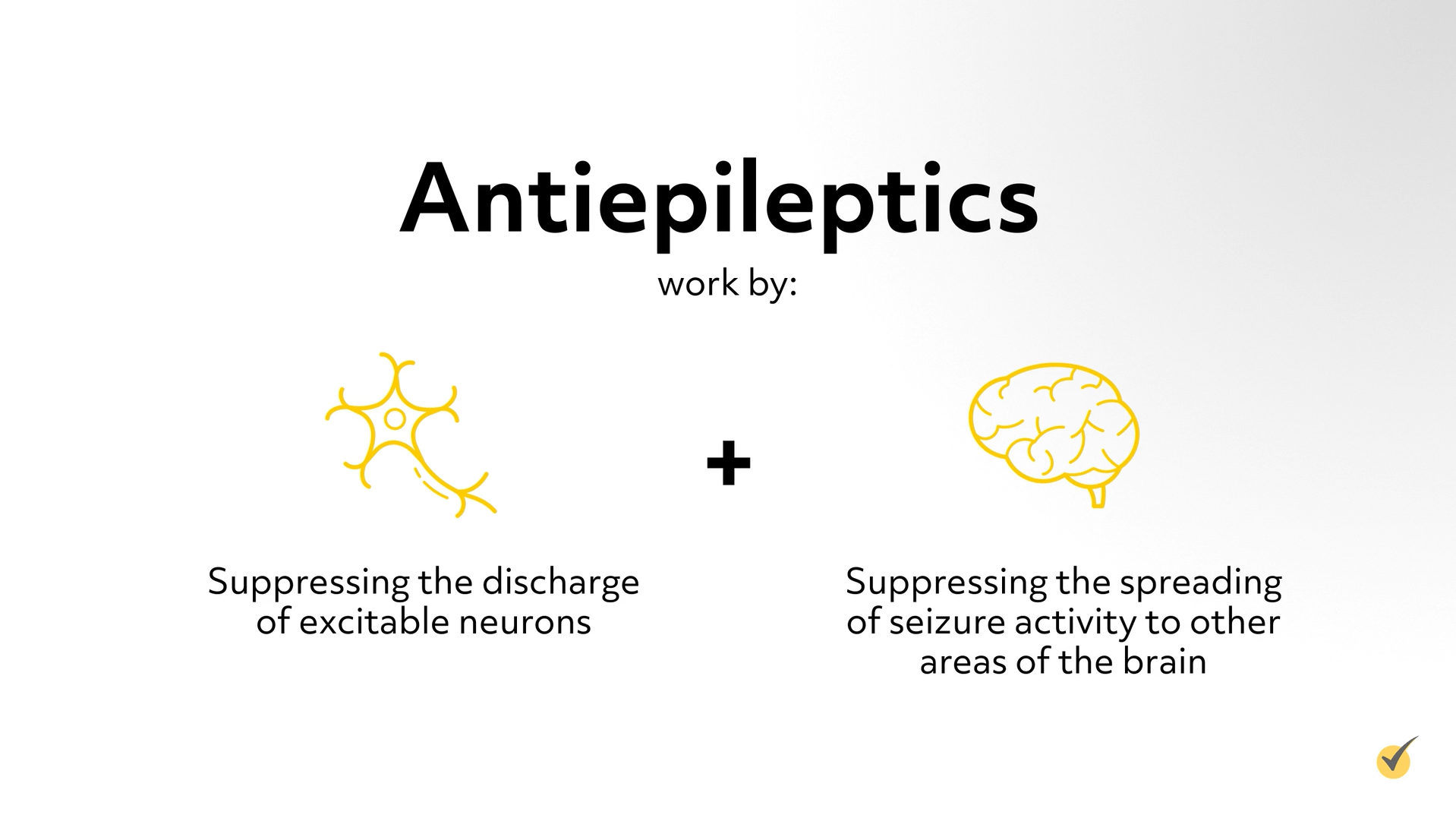 There are many different antiepileptics and each have their own mechanism of action. Some antiepileptics such as Phenytoin, Carbamazepine, and Lamotrigine suppress the influx of sodium on the cellular level which decreases the ability of excitable neurons to fire. Others suppress the influx of calcium, while promoting the efflux of potassium which ultimately leads to decreased neuron excitability and diminished seizure activity. While the idea of eliminating seizures completely is ideal, this can be difficult due to the intolerable side effects of the antiepileptics, therefore the goal of treatment in these patients focuses on increasing their quality of life while decreasing the recurrence of seizure activity.

Before deciding on what antiepileptic to use, you must first obtain a thorough history from the patient to determine seizure type as pharmacological management with antiepileptics are highly individualized. It’s not uncommon for patients to try several antiepileptics before the right one is found to be the most effective and best tolerated. As far as treatment goes, initial treatment should begin with one antiepileptic. If this option fails and is not tolerated, it should be discontinued, and another antiepileptic started. If the second drug fails, then the patient should be started on a third option or combine two antiepileptics. It is important to note that it can take several weeks before the effects of the antiepileptic are seen. Frequent monitoring of plasma drug levels can serve as a dosing guide and can help monitor patient adherence and prevent drug toxicity.

There are two major categories of antiepileptics. The traditional antiepileptics have been on the market for several decades and include a rich history of poorly tolerated side effects. These include such medicines as Phenytoin, Fosphenytoin, Carbamazepine, Valproic Acid, Ethosuximide, Phenobarbital, and Primidone. The newer antiepileptics are better tolerated, BUT limited information and cost can be a downside in choosing these agents. There are 14 newer antiepileptic drugs on the market and include drugs such as Oxcarbazepine, Lamotrigine, Gabapentin, and Levetiracetam. Research has shown that the traditional antiepileptics have a higher risk to the developing fetus and must be considered when prescribing to the pregnant population.

Side effects vary among each class of antiepileptic and risk versus benefit must be weighed when taking these medications. Patient education is an important factor in the antiepileptic treatment plan and should focus on compliance, adherence, and dosing schedules. Patients should be taught to not stop medication abruptly and to avoid alcohol as both can produce unwanted side effects. Routine labs such as a complete blood count and electrolyte panels are needed to assess for leukopenia, thrombocytopenia and agranulocytosis, a side effect of some of the antiepileptics. The patient’s current medication list should be thoroughly reviewed as these medications have many drug interactions, and lastly, pregnancy should always be ruled out before starting treatment due to the risk to the fetus.

Now that we have a general overview of antiepileptics, let’s check out some review questions:

The home health nurse is performing an assessment visit on a patient who has a history of seizures and is asking the patient for a medical history. While the patient is talking, the nurse notices that the patient stops mid-sentence and stares with a fixed gaze out the window. The nurse recognizes this seizure as:

If you answered “B”, Focal seizure, you’re correct. A focal seizure is characterized by a motionless and fixed gaze exhibited by the patient.

Thank you for watching and happy studying!