What is Aerobic Respiration?

Hi, and welcome to this video about aerobic respiration!

What exactly is aerobic respiration, and what steps are involved? We’ll answer both of those questions later on in this video. But first, let’s talk about metabolism and how that relates to aerobic respiration. Remember that metabolism is a series of reactions where molecules are degraded or synthesized. If a metabolic reaction degrades molecules, it’s called a catabolic reaction. Catabolic reactions take fuel like carbohydrates or fat and break the molecules down into useful energy with carbon dioxide and water as byproducts. If a reaction is anabolic, however, it takes useful energy and single precursors and synthesizes more complex molecules for the body to use. Basically, aerobic respiration is a type of catabolic metabolic process that requires oxygen to proceed. It’s made up of three stages that each have multiple steps: glycolysis, the Krebs cycle, and oxidative phosphorylation. Let’s go over each of these processes in a little more depth.

The first step of both aerobic and anaerobic respiration is glycolysis, which does not require oxygen in either case. The purpose of glycolysis is to break down our starting material, glucose, which is a common simple sugar and jam-packed with energy potential. During the process of glycolysis 2 pyruvate molecules, 2 NADH molecules, and 4 ATP are produced. 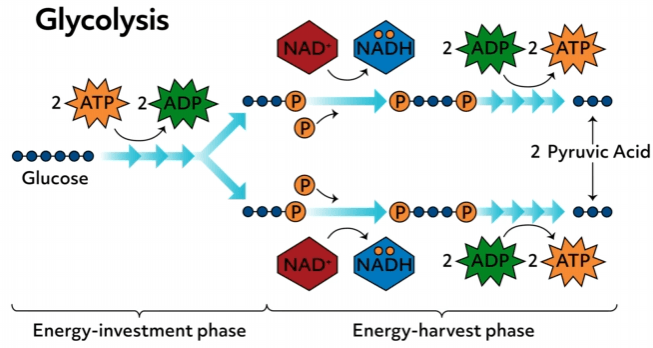 Glycolysis occurs in the cytoplasm of our cells in two phases.

During the first phase, one molecule of glucose is cleaved into two phosphorylated 3-carbon compounds through a series of five reactions. This is accomplished through investing 2 net molecules of ATP, so we can think of this as the energy investment phase. The resulting compounds from phase one are two molecules of glyceraldehyde 3-phosphate or GAP. Each molecule of GAP will go through the second phase, where these 3-carbon compounds are oxidized to form two pyruvate molecules as well as four molecules of ATP and two molecules of NADH in a series of five more reactions. Each of these reactions are oxidation-reduction reactions where electrons are essentially transferred from one compound to another. Therefore, this phase is known as the energy harvesting phase.

So in summary, we started with one molecule of glucose and ended with two molecules of pyruvate that will eventually be converted into more ATP. Glycolysis also produces two molecules of NADH that we’ll use during the Krebs cycle.

However, before we can enter the Krebs cycle, we have to check in with our oxygen levels. At this point the body will ask itself, is oxygen present? If the answer is yes, we move on to the Krebs cycle and the electron transport chain. If the answer is no, the body is forced to undergo anaerobic respiration through a process called fermentation. It would be inefficient for the body to go through any more processing past this point without considering oxygen levels, because the conversion of pyruvate to acetyl coenzyme A is an irreversible step. We don’t want to convert molecules into compounds we can’t use due to the oxygen conditions. This step is called the connecting step. Once that’s complete, we can move on to stage two

Since we’re talking about aerobic respiration in this video, let’s assume that oxygen is present and that both pyruvate molecules were converted into two molecules of acetyl CoA, effectively committing to the Krebs cycle. The Krebs cycle is simply a series of oxidation-reduction reactions that take place in the mitochondrial matrix of eukaryotes where carbon molecules are oxidized to harvest electrons. A pre-existing molecule, oxaloacetate, reacts with acetyl CoA to form citrate, also known as citric acid. Through a series of redox reactions, carbon dioxide is produced along with NADH and FADH2. Oxaloacetate is regenerated so that the cycle can begin again for our second molecule of acetyl CoA. FADH2 and NADH are high-energy electron carriers that will donate their electrons during the electron transport chain to generate ATP. Although the Krebs cycle nets 2 molecules of ATP, this is an insignificant amount compared to the amount we’ll generate later on in the process.

The last stage we’ll talk about today is oxidative phosphorylation, which is a process the electron transport chain (ETC) uses to generate ATP. The purpose of the ETC is to produce a proton gradient (H+ ) using energy from those high-energy electrons in NADH and FADH2 that are carried over from glycolysis and the Krebs cycle. This proton gradient will eventually serve as a proton motive force to synthesize ATP. Oxidative phosphorylation is when electrons are used to reduce oxygen to form water–during which we release a lot of energy. And so our bodies use all of this energy to generate ATP. Let’s break it down!

The ETC is located within the inner membrane of the mitochondrion in eukaryotes and is made up of four protein complexes labeled I-IV. The process starts with our molecules of NADH which have a lot of energy or electron-transfer potential. Electrons from NADH enter protein complex I via an oxidation reaction and form NAD+, H+, and two electrons.

The electrons flow through the complex until they reach the mobile electron carrier called ubiquinone (Q), which is reduced to QH2. This part of the process gives us enough energy to pump protons from the matrix into the intermembrane space to start building up our proton gradient.

Nearly simultaneously, FADH2 enters protein complex II and is oxidized to FAD, transferring its electrons to ubiquinone (Q) and later reduced to QH2. Unlike complex I, complex II only accepts protons from FADH2 and does not contribute any protons to the proton gradient. QH2 then travels through the membrane to deliver the electrons collected to complex III. The transfer of electrons into complex III allows protons to be pumped from the mitochondrial matrix to the intermembrane space to help build up the proton gradient some more. From here, the electrons are passed on to another mobile electron carrier called cytochrome C. Cytochrome C takes those electrons and passes them on to complex IV, the last protein complex in the ETC. Complex III becomes supercharged with electrons just like we saw in complexes I and II, so complex III is also able to pump protons from the matrix into the intermembrane space.

At this point, we have a proton gradient where there are more protons in the intermembrane space than there are in the matrix, and we have lone electrons in complex IV. We know from basic chemistry that those lone electrons are not stable and will be looking to bind to something. This is where the oxygen comes in. Since we established that oxygen is in fact present, those lone electrons will react with oxygen (O2), splitting it into two oxygen ions. Now each oxygen ion will bond with two protons (H+) to form two water molecules (H2O). The important thing to note here is that oxygen acts as the final electron acceptor, helping the reaction come to completion and remain stable. This effectively brings the electron transport chain to an end. The reason we transfer electrons in a chain-like fashion versus giving them straight to oxygen is because the reaction is more controlled and easier to use when we transfer energy a little bit at a time.

Finally, a protein called ATP-synthase will utilize the proton motive force generated by the ETC and protons to phosphorylate adenosine diphosphate (ADP), which is less energetic, to become adenosine triphosphate (ATP). As a whole, the process will net about 30 to 32 ATP molecules. From the electron transport chain through ATP synthase, we essentially converted the electron-transfer potential of NADH and FADH2 into ATP, a more energetic molecule. 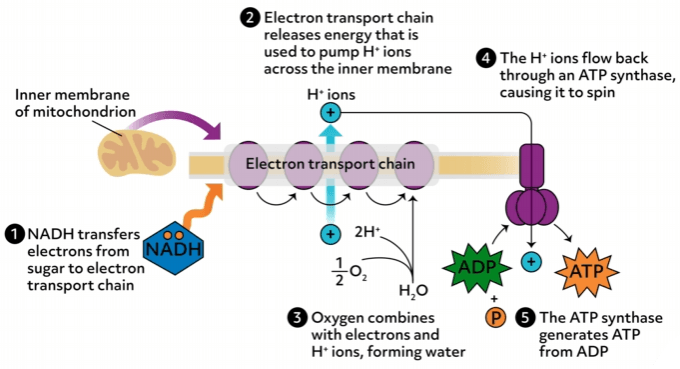 Now that we’ve covered the different steps of aerobic respiration, let’s look at a couple of review questions to test your knowledge.

The correct answers are A, C, and E!

2. Which best describes the purpose of the Krebs cycle in aerobic respiration?
A. It produces low-energy electron carriers in the form of NAD+ and FAD
B. It’s a series of oxidative phosphorylation reactions that generate ATP for various
cellular processes
C. It recycles enzymes from glycolysis so the process can repeat
D. It produces high-energy electron carriers in the form of NADH and FADH2

What is aerobic respiration?

Aerobic cellular respiration is a series of enzyme-controlled chemical reactions in which oxygen reacts with glucose to produce carbon dioxide and water, releasing energy in the form of adenosine triphosphate (ATP).

Where does aerobic respiration occur?

The majority of aerobic respiration occurs in the mitochondria, but the first step known as glycolysis takes place in the cytoplasm.

What is the difference between aerobic and anaerobic respiration?

How many ATP are produced in aerobic respiration?

As a whole, the process will produce about 36 net ATP molecules; 2 net ATP from glycolysis, 2 from the Krebs cycle, and 32 from oxidation phosphorylation.

What are the products of aerobic respiration?

The products of aerobic respiration are carbon dioxide, water, and ATP.