What is an Adverb?

Describing situations in detail helps readers more vividly understand what is taking place. When describing things in more detail, adverbs are a helpful addition to make your sentences more colorful and portray the event clearly. In this video, we’ll take a look at what adverbs do, how to identify them, and how to best use them in our writing. Let’s get started!

The easiest way to find an adverb in a sentence is to ask these questions:

An easy identifier for adverbs is the suffix -ly. Not all adverbs use it, but the majority of adverbs do.

Let’s identify some adverbs by using our four questions.

She went outside and walked the dog.


Do any of the words in this sentence answer the question “Where, when, how,” or “to what extent”? In this example, we see that outside is the adverb because it tells us where she went.

Let’s look at another:

They briskly jogged through the park.


Here, we see that the word briskly answers the question of how something was done, making it the adverb in the sentence.

She almost tripped while jogging but regained her balance.


This one might be tricky. In this example we see that almost describes the extent to which something happens, which in this case was tripped—she almost tripped, making almost the adverb here.

When we want to describe the quality of something, we can say the thing itself is done well—that would be a positive adverb. We may compare that thing to something else and say, “this thing is better than something else,” which is known as a comparative adverb, or we may simply say, “this thing is the best,” which is superlative. As you can see, with each comparison the degree of its descriptor increased.

There are many ways of changing adverbs from positive to comparative and superlative. Let’s go over each one with real examples and see how they differ.


What’s important to note about positive adverbs is that the words used don’t necessarily have to be positive or “good” words. For example, the word badly is a positive adverb because it is the first or basic degree you can use to describe something without comparing it to anything else.

Many adverbs can be modified to show different degrees by simply adding -er or -est to the end of the word. Adding -er to a word makes it comparative, meaning it is not the most of something, but it is more than something else. Adding -est to the end of a word means that the word it is describing is the most of something and nothing can be compared as being better than it. Here’s an example:

He ran through the field faster than his sister.


In this example, the adverb faster responds to the question of how something was done. We also know this is a comparative adverb because of the added -er to the end of fast—this lets us know that this person ran at a higher speed compared to his sister. Here’s another example:

She was the quickest of everyone who ran the 5k.


Here we see the adverb quickest answers the question of how something was done. Because there is an -est at the end of quick, we know that this adverb is superlative because no one else ran more quickly than this person.

Some adverbs, especially those that end in -ly can’t have their degrees increased to comparative or superlative forms by simply adding -er or -est to the end. These adverbs must have more and most preceding the word to be modified. Let’s look at a few examples.

The crowd cheered for her more joyfully than for the other performers.

He completed his task most efficiently of all the employees.


Again, in this example, the adverb efficiently is easy to spot, not only because it ends in -ly but because it answers the question of how the song was performed. We also find the word most preceding efficiently, which means this is a superlative adverb and no task was completed more efficiently than his.

Now let’s look at adverbial phrases. Adverbial phrases perform the same function as adverbs and describe when, how, to what extent, and where something happens. What makes them different from normal adverbs is they are phrases, which means they are a group of two or more words and they don’t always contain a typical -ly adverb in the phrase. Here are some examples that answer the question “When?”:

He goes camping every summer.

They are going to sleep earlier than usual.


The phrases above signify a time in which something occurs.

He was driving haphazardly and recklessly.


The adverbial phrase above is made up of two adverbs and a conjunction to make a phrase that describes how something occurred.

Sit at the table until your food is eaten.


In this example, the adverbial clause “until your food is eaten” describes when something occurs. We also know it is a clause because it has a subject, food, and verb, eaten, as well as a subordinating conjunction, until.

My sister, although she was hungry, wouldn’t eat until I arrived.


Here, the adverbial clause starts with a subordinating conjunction, although, has a subject, she, and a verb is. Together they describe the extent to which the sister wouldn’t eat.

Make sure you are polite to people wherever you go.


This example shows the subordinating conjunction wherever, subject you, and verb go, to show when something happened.

Before we go, let’s do a little practice to refresh what we’ve learned:

1. Which of the following are not adverbs?

The word them is a pronoun.

2. The underlined word is an example of what?

Some people agree that Serena Williams is the greatest athlete of all time.

What is an adverb?

An adverb is a word that modifies a verb, adjective, or other adverb. Adverbs typically express manner, place, time, frequency, degree, or level of certainty. This means that an adverb answers the question of how, when, where, why, or to what extent. For example, in the sentence below, the adverb quickly modifies the verb ate, which answers the question of how Mallory ate:

What is a conjunctive adverb?

In the example below, the conjunctive adverb however joins the two independent clauses Steven went to the store and he didn’t find anything he wanted to buy:

“Steven went to the store; however, he didn’t find anything he wanted to buy.”

What is an adverb clause?

An adverb clause, or an adverb phrase, is a group of words that functions as an adverb. This means that an adverb clause can modify a verb, adjective, or adverb. Here’s an example of a sentence that uses a simple adverb, later, to modify the verb runs:

“We can light the fireworks later.”

Here’s that sentence again, but this time, a full adverb phrase is used to modify the verb runs:

“We can light the fireworks after the Sun goes down.”

The adverb clause after the Sun goes down provides a little more detail as it answers the question of when.

Is “very” an adverb?

Here is very being used as an adverb, modifying the adjective busy:

“Chloe entered the very busy marketplace in search of some fresh avocados.”

The word very can also be an adjective in some cases. In the example below, very is being used as an adjective to modify the noun beginning:

“Could you start over from the very beginning?”

What questions do adverbs answer?

Adverbs typically express manner, place, time, frequency, degree, or level of certainty. This means that an adverb answers the question of how, when, where, why, or to what extent.

How: “Janet speaks softly.”
When: “I saw the movie yesterday.”
Where: “Leave the boxes here.”
Why: “Pablo wore gloves to warm his handsAn adverb clause is a group of words that functions as an adverb..”
To what extent: “Partially written papers will not be graded.”

How are most adjectives changed into adverbs?

Generally, adjectives are changed into adverbs by adding the ending -ly to the word.

Adjective: “He is a careful driver.”
Adverb: “He always drives carefully.”

What should be added when an adverb begins a sentence?

A comma should be added when an adverb begins a sentence.

“Suddenly, a limb broke off the tree and crashed into the ground below.”
“Carefully, she opened the oven door to see if the cookies were ready.” 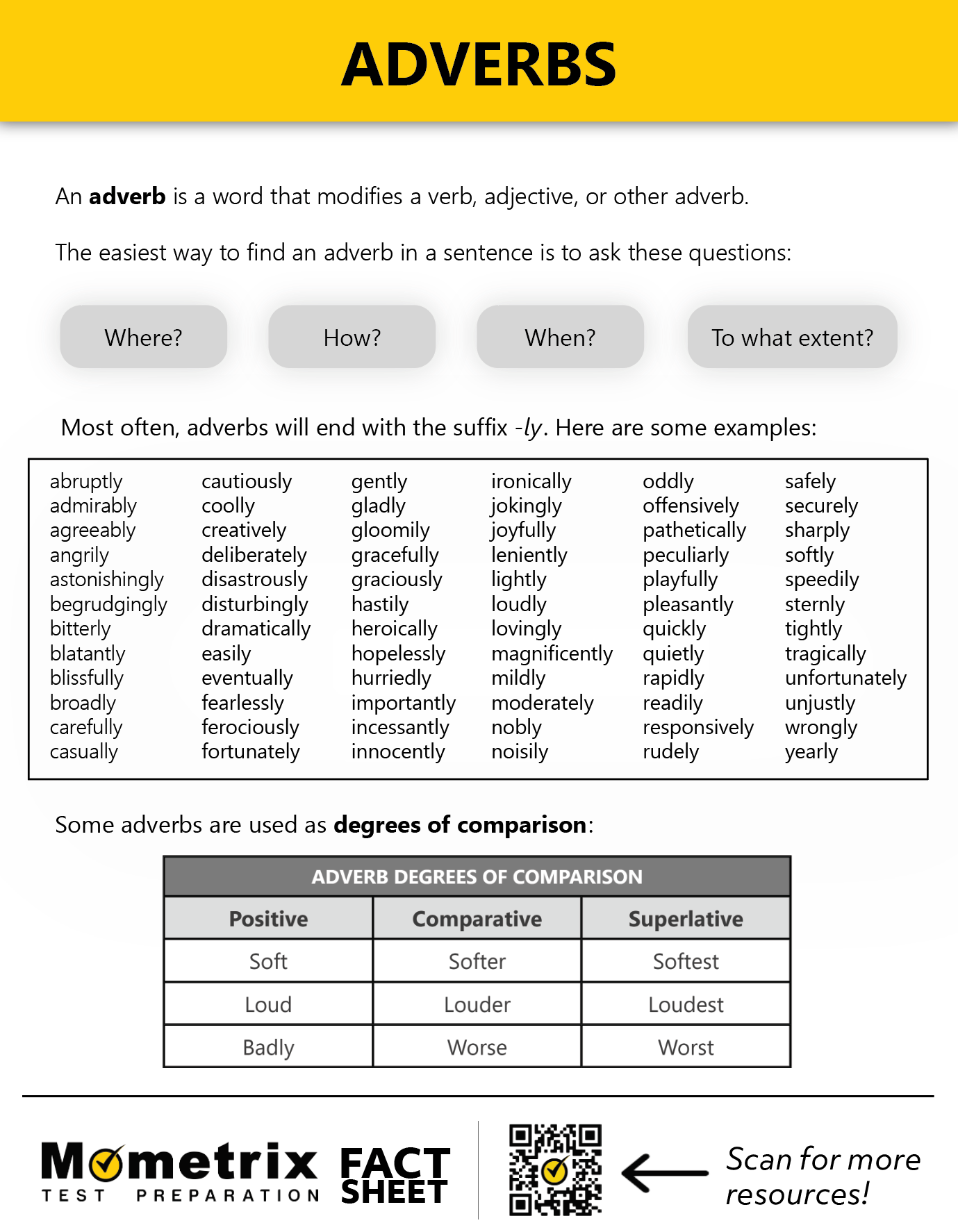 Which question does the adverb in the following sentence answer?

Damien checked the list of ingredients carefully before starting to make the dish.

The adverb carefully answers the question of how Damien checked the list of ingredients.

Although she was running late, Angelica stopped by the coffee shop on her way to work.

Because the underlined section contains a subject, verb, and subordinating conjunction, it is an adverbial clause.

Quinton remarked that celery was the worst vegetable he had ever tasted.

A superlative adverb is one that expresses the highest degree of quality.

Which of the following would be the positive form of the superlative biggest?

A positive adverb is simply the first degree of describing something.

He studied for the exam carefully and methodically.

Because the underlined section contains two adverbs and a conjunction, it is an adverbial phrase.