Hi, and welcome to this video on the physics of sound! Today, we’ll discuss how sound waves work and how they relate to the pitch and intensity of sound.

So, how exactly do we hear sound? And what is sound, anyway?

Sound actually occurs as a result of vibrations in the air or in other materials. When something makes a sound, it vibrates and those vibrations are then transferred to the surrounding air (or other material) in a wave pattern. When that sound wave reaches our ears, it creates a vibration in our eardrums, which our brain interprets as a sound.

Sound waves are a type of longitudinal wave, meaning that they vibrate in the same direction that they are traveling.

As the wave is travelling, there are variations in pressure occurring in the medium it’s travelling through. So, molecules in that medium are bunched up, or compressed, in the high pressure regions and spread apart in the low pressure regions, which is called rarefaction. We can see this at work in a tuning fork.

When the prong of a tuning fork vibrates in the air, the layer of air adjacent to the prong undergoes compression. When the prong moves back in the opposite direction, it leaves an area of reduced air pressure. It’s important to note that sound cannot occur in a vacuum, since there is no medium for it to travel through. This means that there is no sound in space, contrary to many movies or TV shows you may have seen! 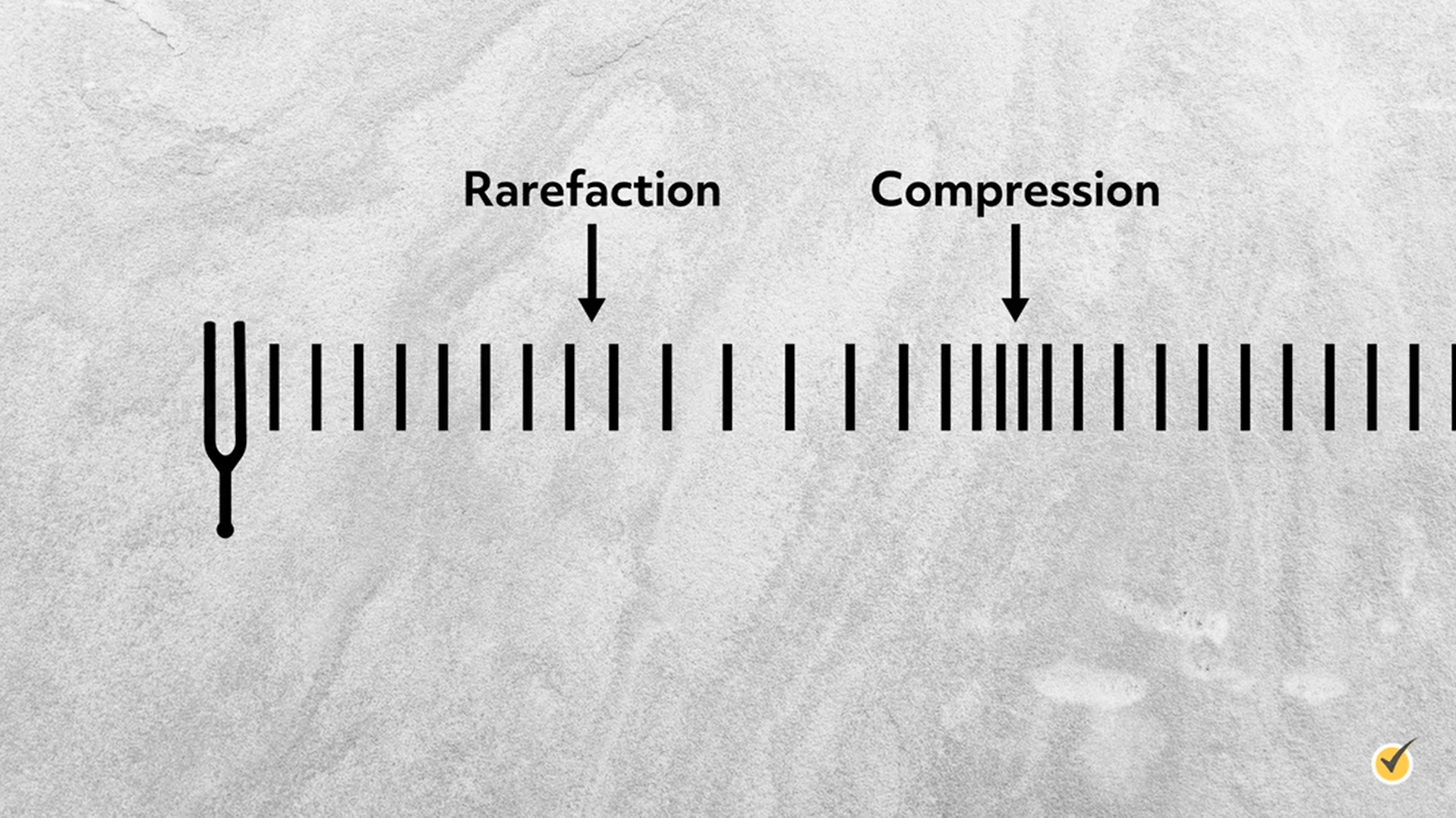 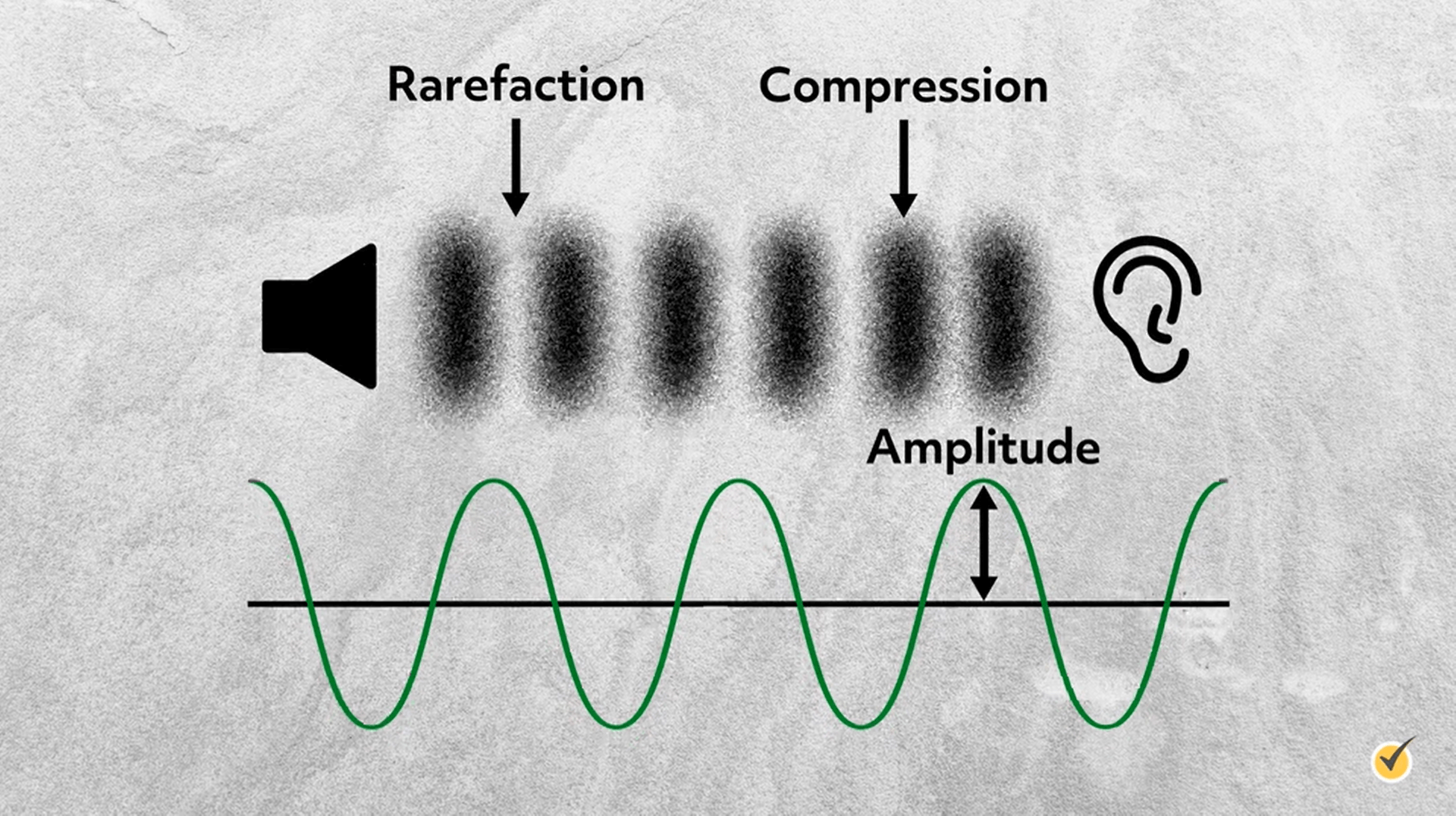 When the wave is vibrating at a high frequency, it emits a higher pitch, while lower frequencies result in a lower pitch. 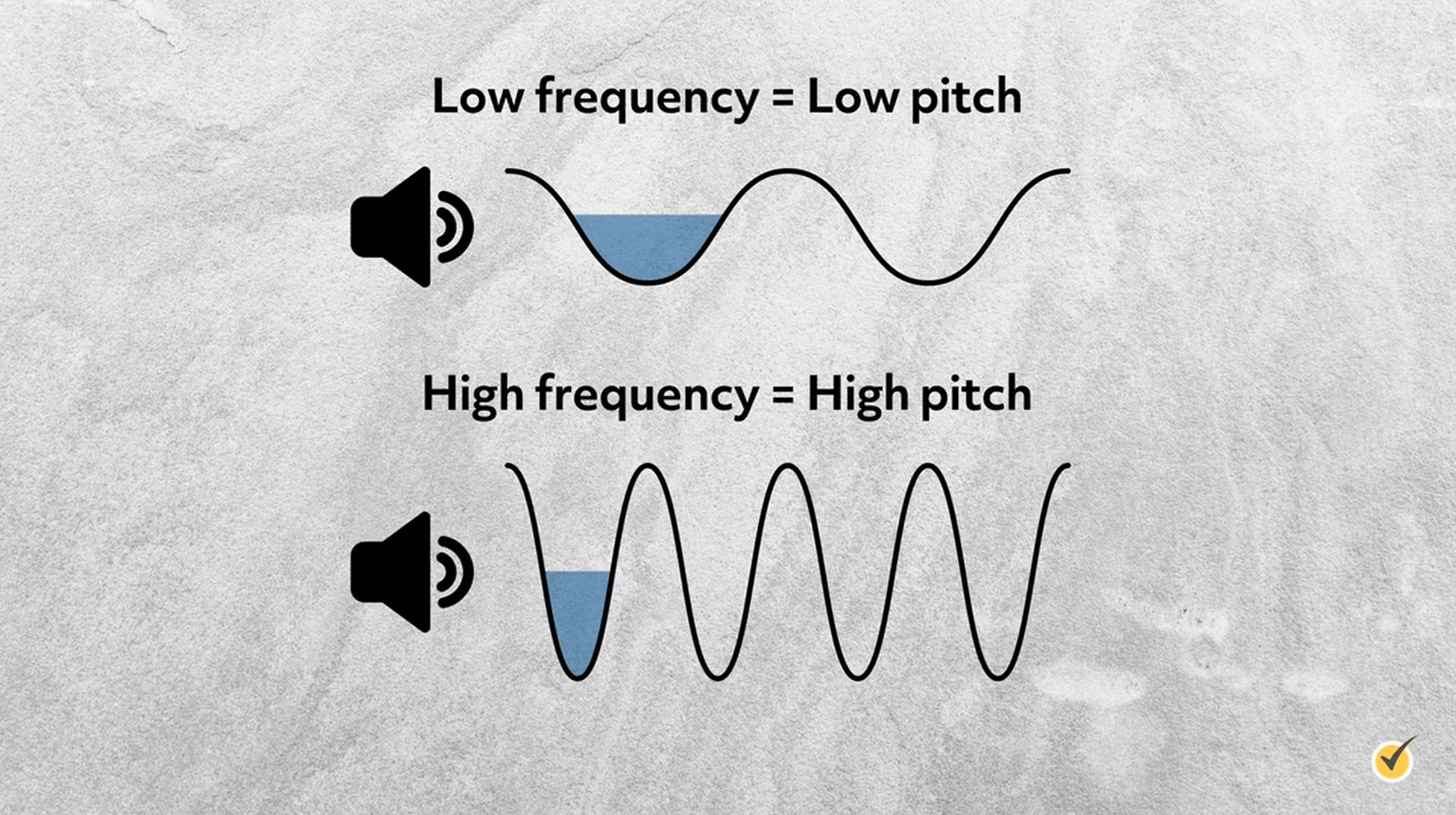 Another defining characteristic of sound is its loudness. While loudness is not exactly a physical property itself, we can think about loudness in terms of power and intensity. Power is the rate at which energy is transferred through a sound wave, thus making it a measurement of how energetic the sound is. The intensity of the sound is the amount of power per area. In other words, intensity is:

Sound intensity is also related to the change in the pressure from the wave (the amplitude), the density of the medium it is traveling through, and the speed at which the wave is travelling. We can see this using the following equation:

where \(∆p\) is the change in pressure, which is a representation of the amplitude of the wave; ρ is the density of the medium the wave is traveling though; and v is the speed of sound in a given medium. Both ρ and v vary somewhat with temperature. So, in problems dealing with sound, you may also be given a temperature in addition to the type of medium the sound is traveling through in order to look up the appropriate values for these variables.

Vibrations can occur at pretty much any frequency; however, human beings can only hear sounds in a certain frequency range, generally about 20 – 20,000 Hz. Of course, this varies a little from person to person and by age. As you get older, you can expect this range to get a little smaller.

Up until now, we’ve only discussed sounds that consist of a single sound wave and one frequency. Of course, in the real world, sounds change and some sound waves may interfere with others. One obvious example is music. No one wants to listen to a single monotonous tone. So how can we create some variation? 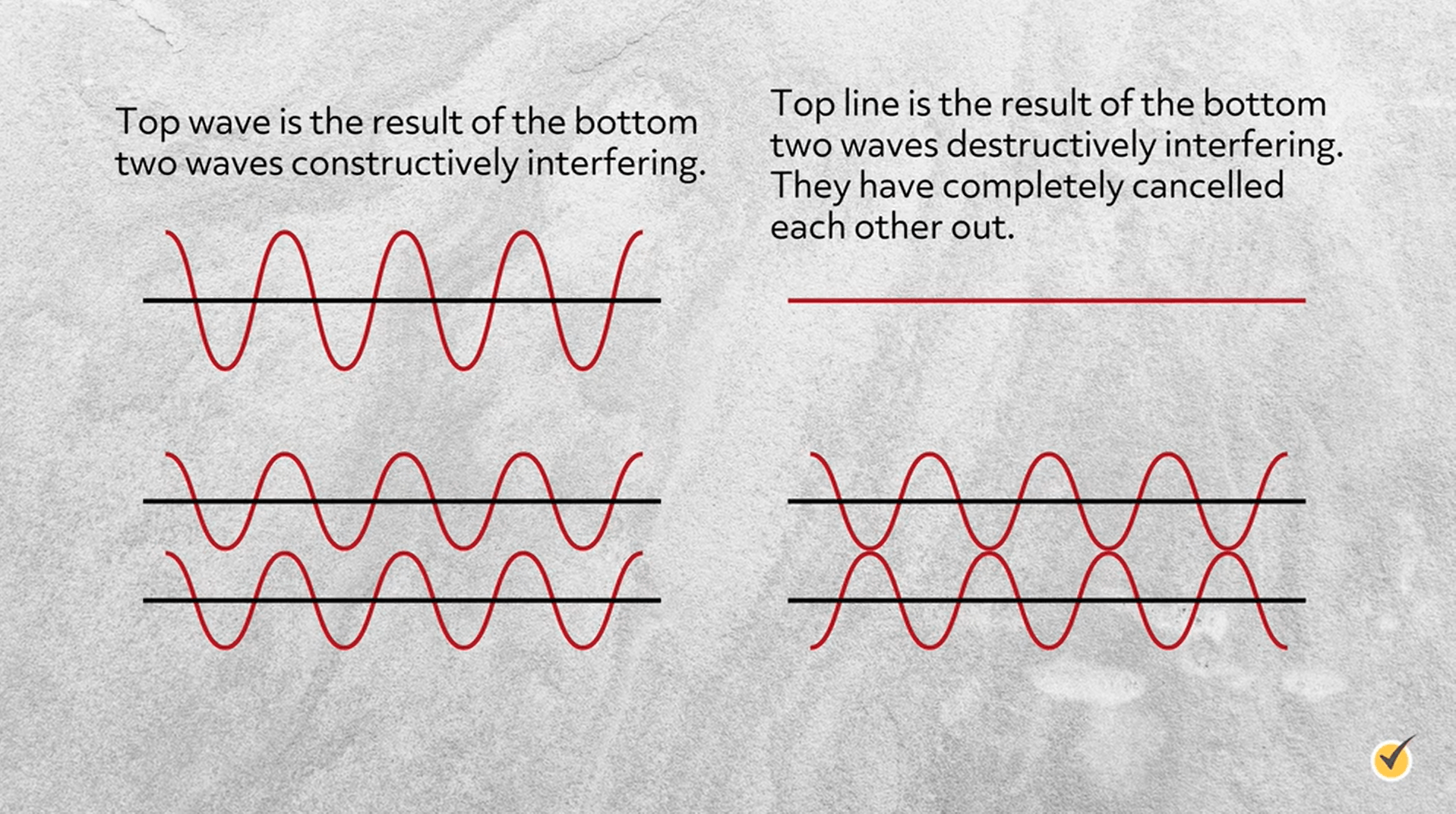 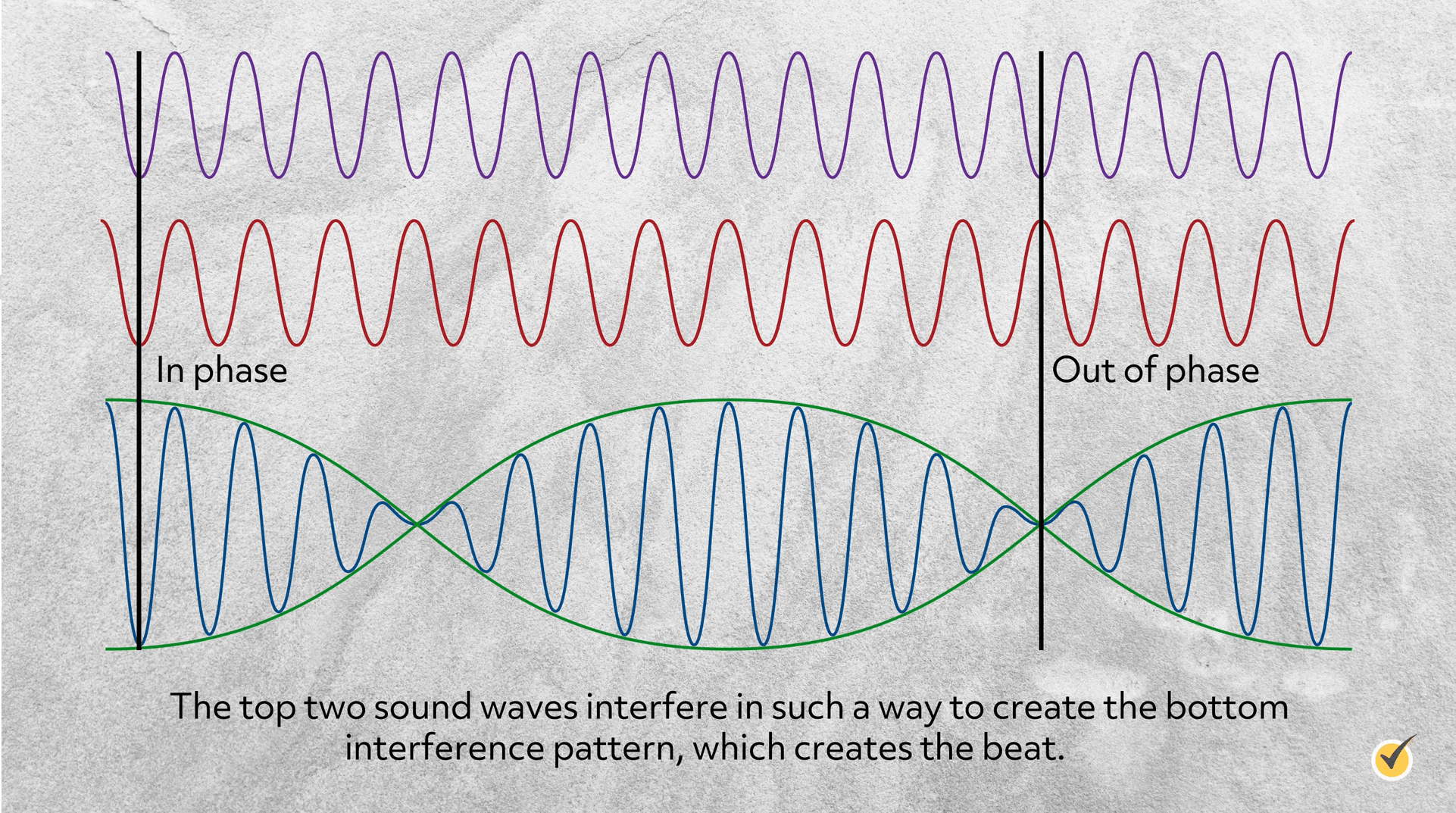 These occurrences will be periodic and have a frequency of their own, equal to the difference of the other two frequencies. For example, if our two frequencies are 225 Hz and 220 Hz, the beat frequency would be 225 Hz – 220 Hz = 5 Hz.

Okay, now that you know all about sound waves, let’s go over some review questions!

The correct answer is B! The higher frequency of the dog whistle means it is higher pitched and dogs respond to this high pitched sound because they can hear it. The frequency range doesn’t necessarily relate to the “loudness” of the sound.

If two sound waves with frequencies of 354 Hz and 362 Hz interfere with each other, what will the beat frequency be?

That’s all for this review of sound waves! Thank you for watching, and happy studying!