Hey guys, Welcome to this Mometrix video about the respiratory system.

Every one of the systems in the body plays a critical role in our ability to function, but the respiratory system is particularly important. The respiratory system allows us to breathe. Without it, we can’t take in the oxygen that helps us survive, and we can’t expel the carbon dioxide that can result in dangerous health issues.

Functions of the Respiratory System

Air comes in through our noses and mouth and then passes through the pharynx, larynx, and trachea before entering the lungs. 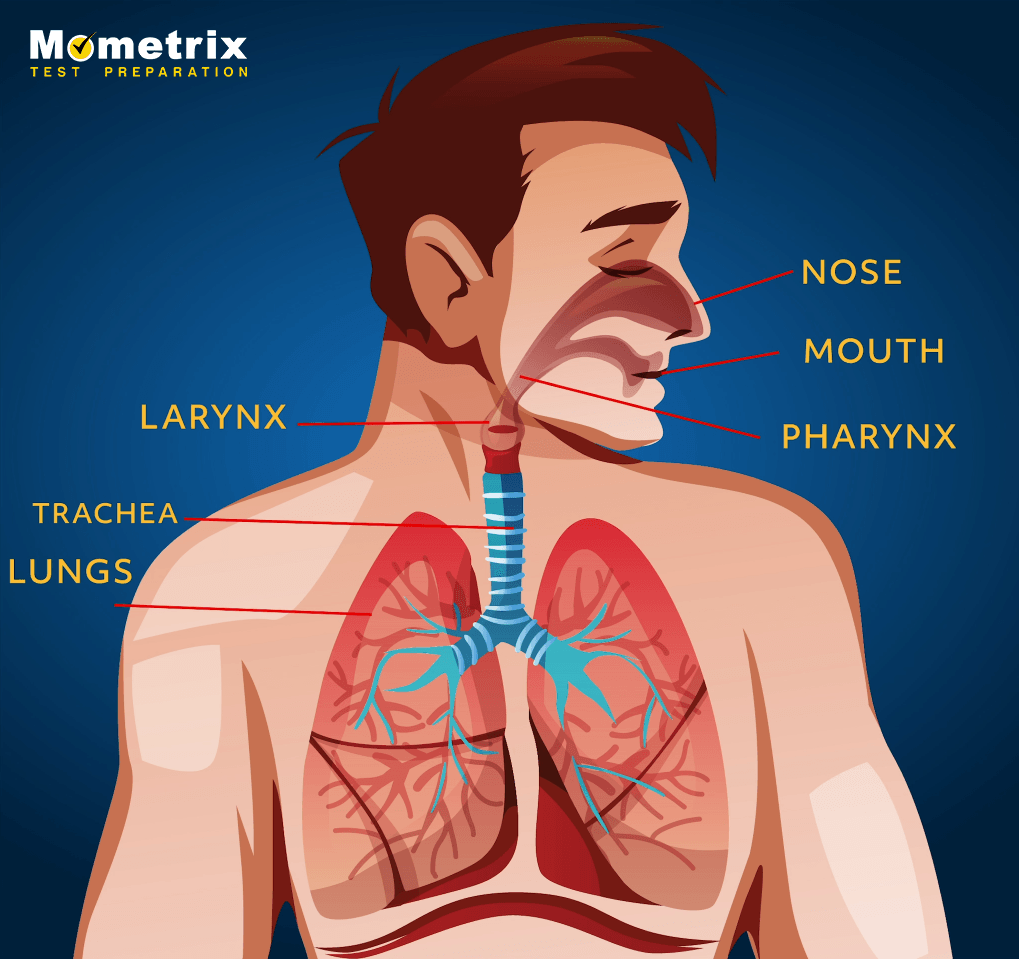 When we exhale, the air goes back out of our bodies. By the way, the trachea, or windpipe, connects the pharynx and larynx to our lungs.

When the respiratory system exchanges gases, that’s called external respiration. When air goes into the body, it supplies the lungs with oxygen. As that oxygen comes in, the lungs expel carbon dioxide. A little later, we’ll talk more about why it’s so important that the body regulates carbon dioxide.

That leads us to our third function, called internal respiration.

Internal respiration exchanges gases between the bloodstream and tissues. The bloodstream carries oxygen to cells and expels carbon dioxide.

The respiratory system also helps us with sound, and that’s the fourth function on our list.

When we exhale, air goes from our lungs to the larynx, more commonly known as the voice box. When air moves through the vocal cords they vibrate, and that creates sound.

The respiratory system helps us smell, and that’s the fifth and last function.

Ever wonder why you can’t smell anything when you have a clogged nose? It’s because little fibers in your nose, the olfactory fibers, have been blocked by mucus or some other substance. 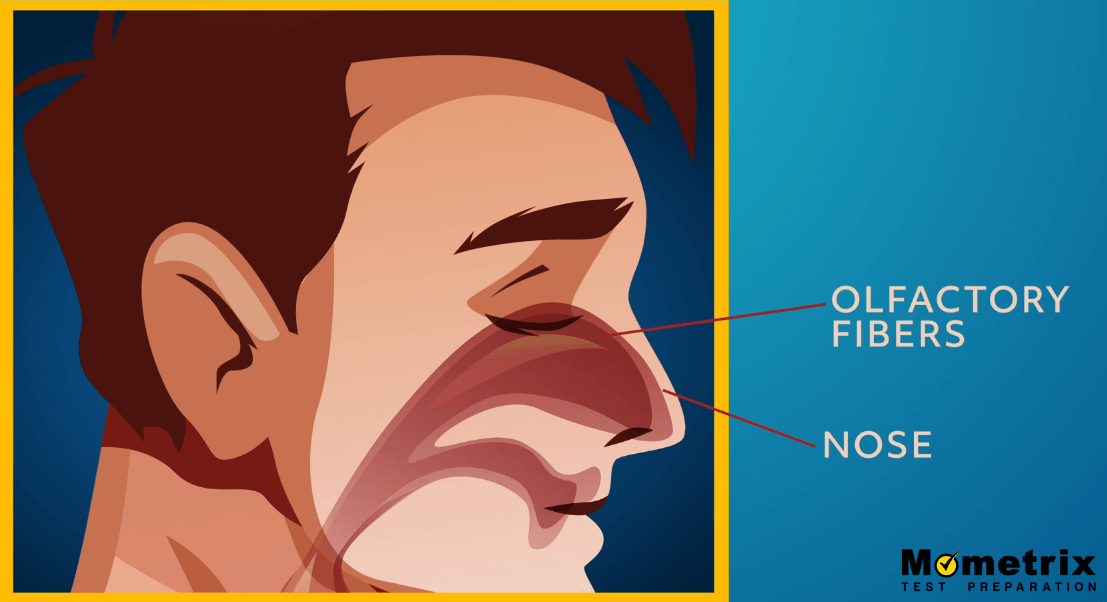 So those are the respiratory system’s five main functions. But let’s talk a little more about carbon dioxide.

The respiratory system does a delicate push and pull by pulling in oxygen and pushing out carbon dioxide. Sometimes, the body’s internal regulation doesn’t work correctly, resulting in a condition called hypercapnia. Hypercapnia can cause a host of health issues, including fatigue, headaches, and dizziness. In the most severe cases, hypercapnia can cause seizures, palpitations, and panic attacks.

The nose knows. It really does. The nose and its nasal cavity govern our sense of smell. With it, humans can differentiate between 5,000 and 10,000 different scents. The nose has an internal and external structure. The external structure contains the root, which is located between the eyebrows; the bridge, which connects the root to the rest of the nose; and the dorsum nasi, which extends from the root to the tip of the nose. 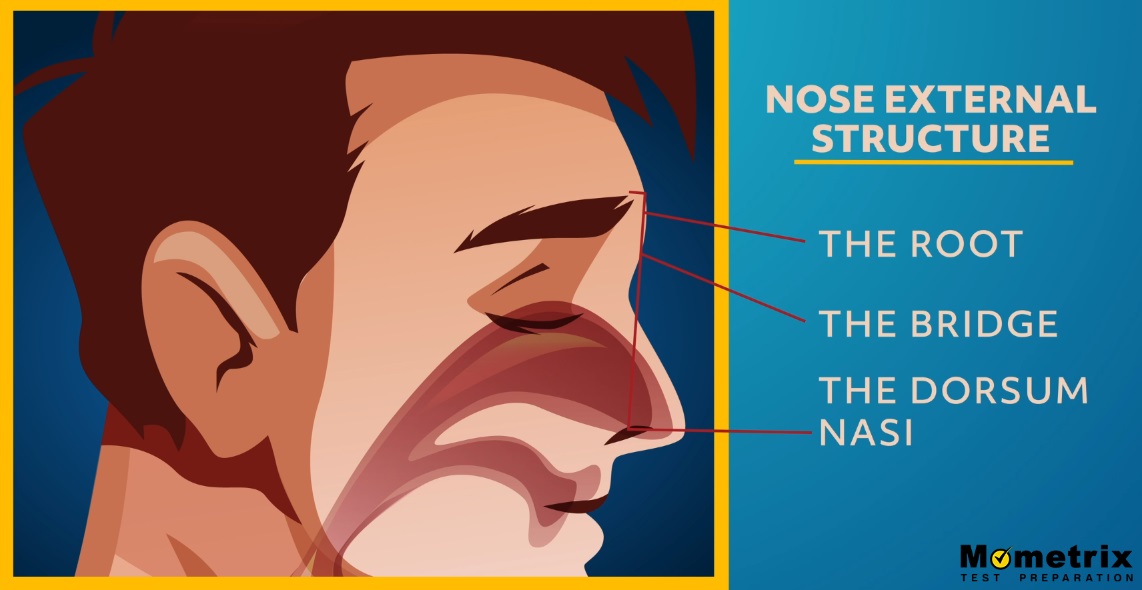 The external nose also contains the frontal, nasal, and maxillary bones, as well as the septal and major alar cartilages.

We know the internal nose as the nasal cavity. It’s lined with hairs and a mucous membrane that acts as a human air filter. The cavity warms, moisturizes, and filters air that enters the body before it reaches the lungs.

But that’s not all. The nose also has an intricate sinus system. Sinuses produce mucus to moisturize the inside nose and protect us from dirt, dust, and other organisms.

There are three different sinuses. 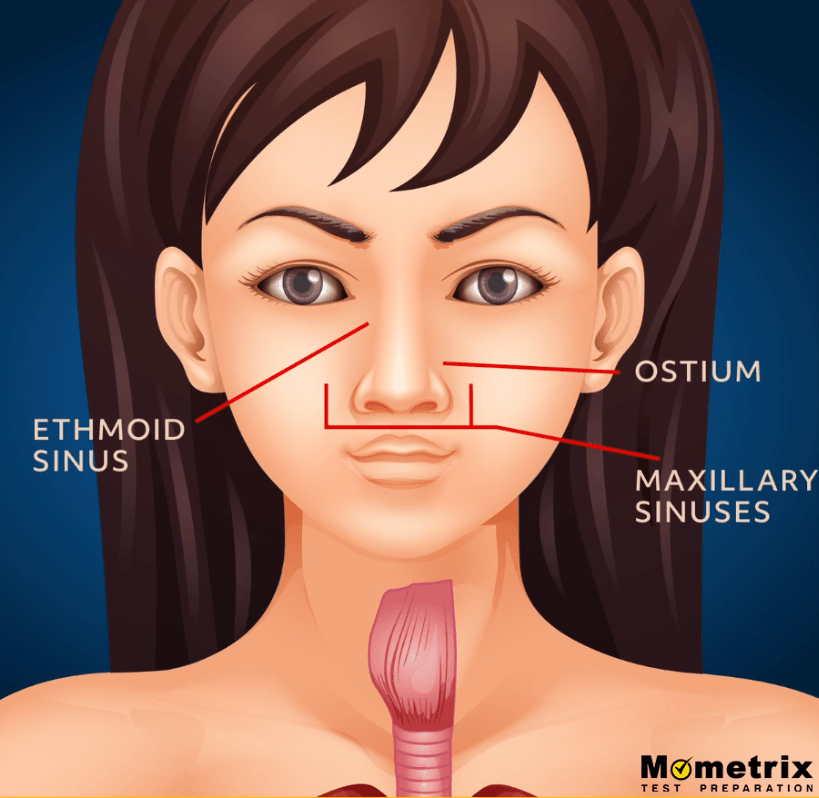 There are two maxillary sinuses located on both sides of the nose just below the cheeks. They are collectively the largest sinus and the one that can cause some pain. The maxillary sinus drains into the nose through a small hole called the ostium. When the ostia become clogged, that can result in sinusitis, or a sinus infection. The ethmoid sinus is located between the nose and eyes and the frontal sinus is located above each eye.

For most of you, the mouth is the easiest structure to remember because we use it all the time. We ingest food through our mouth, which is also called the oral cavity. Small glands and three pairs of salivary glands keep the mouth moist. We need that moisture to soften and swallow food. There are also two membranes in the mouth: the gums and the tongue. The gums support our teeth, and the tongue contains our taste buds.

Now let’s move on to the pharynx. The pharynx has three separate sections: the nasopharynx, the oropharynx, and the hypopharynx. 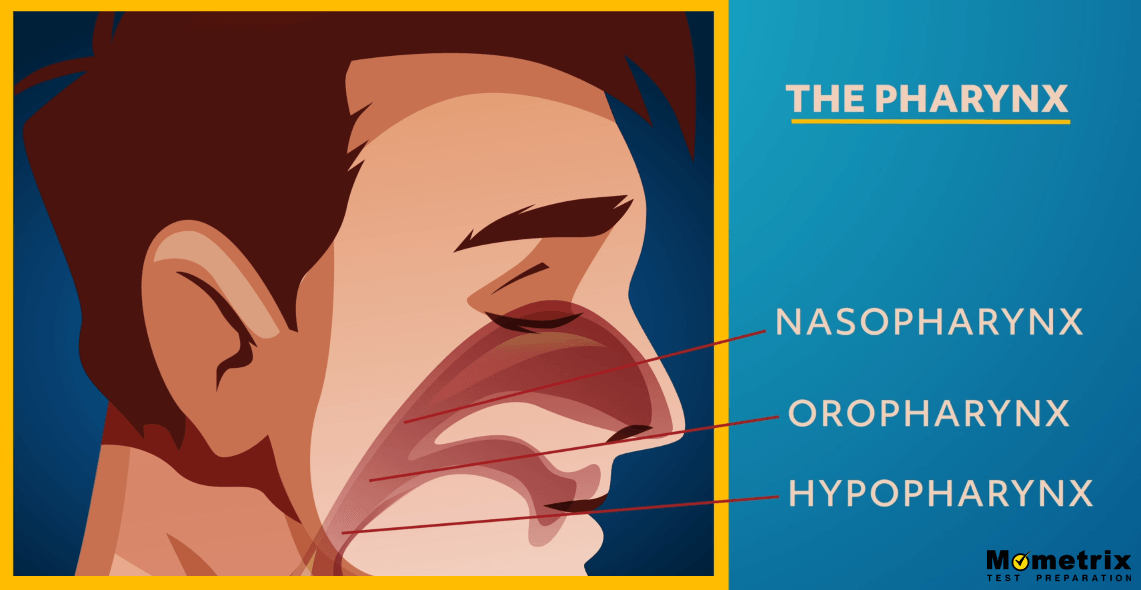 The nasopharynx, located above the soft palate, is the mechanism that lets you breathe through your nose. The oropharynx connects the nose and the back of the mouth to the esophagus. The hypopharynx is the passageway for food. Food goes from the mouth, through the hypopharynx and esophagus, and then into the stomach.

Let’s talk about the larynx, the last part of the upper respiratory tract we’ll discuss. We know the larynx as the voice box because without it, we wouldn’t be able to talk. But the larynx does much more. The larynx allows air to pass through the respiratory tract, but it also protects the trachea by ensuring food and drink don’t block the airway. The larynx itself has three sections: the supraglottis, glottis, and subglottis. 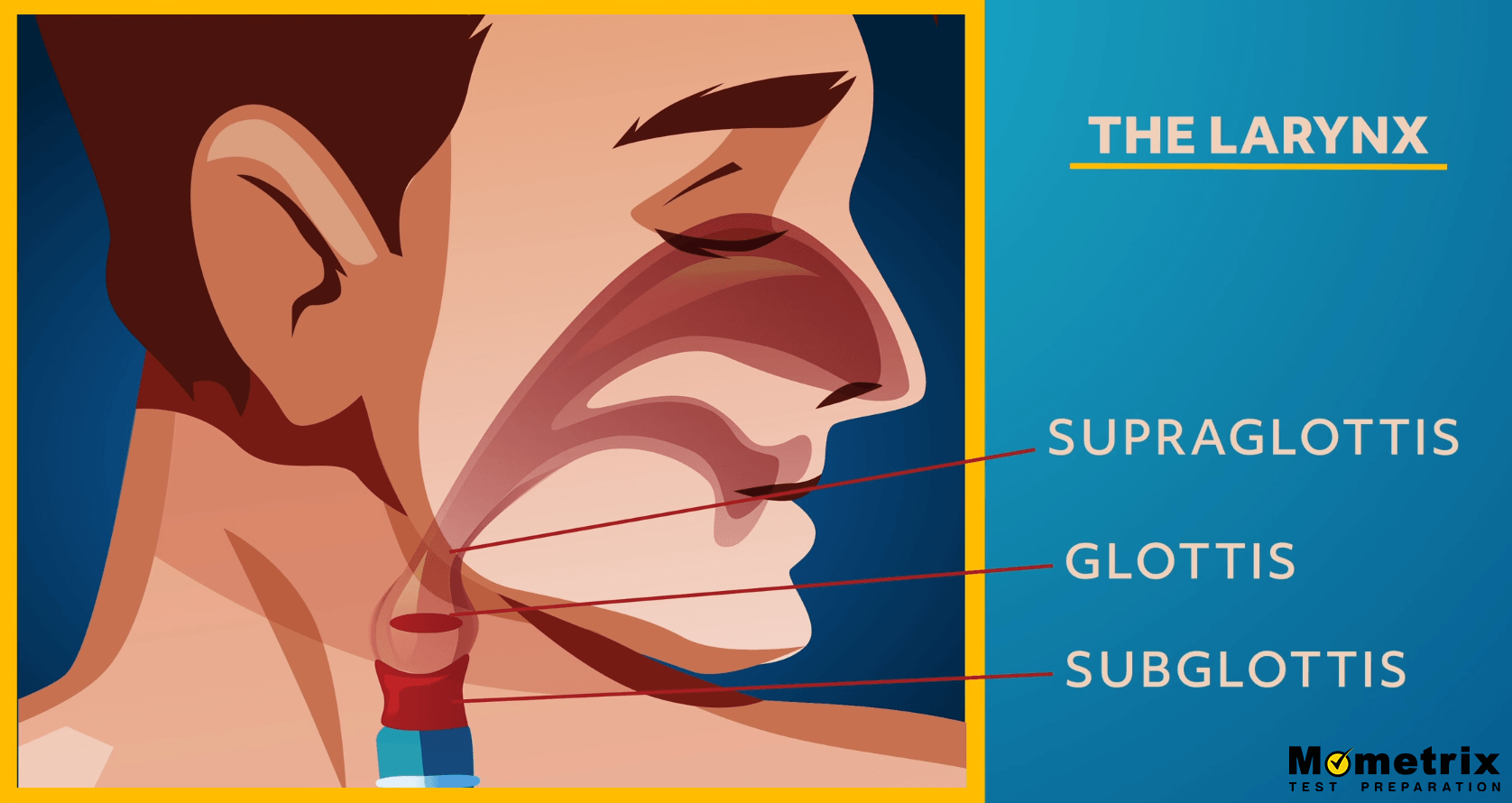 A network of nine cartilages connected by muscles and ligaments form the larynx.

Let’s start with the trachea.

The trachea is the main airway to the lungs and is more commonly referred to as the windpipe. The trachea connects the larynx to the left and right bronchi in the lungs.

We need our lungs to pull in air and breathe. We talked earlier about the body’s need to pull in oxygen and push out carbon dioxide, and that’s what our lungs do for us. Our lungs are an indispensable part of our breathing system. The lungs connect to the trachea via the left and right bronchi. They’re protected by the sternum, rib cage, and vertebrae. The process of perfusion helps fluid pass to an organ or tissue. The alveoli produce a fluid called surfactant, which helps prevent the lungs from collapsing. Tidal volume represents the normal volume of air that moves in and out of the body when we inhale and exhale.

The lungs have an intricate system of members and functions that help them stay healthy and in proper working order. The pleura, a membrane on the inside and the outside of the lungs, secretes a fluid that lets the lungs move against the rib cage when we breathe.

The lobes all have the same function, as they all bring oxygen into and remove carbon dioxide from the blood stream.

Let’s move on to the bronchi.

There’s a tube in each lung called a bronchus that connects to the trachea. There are two main bronchi that are extensions of the trachea that help push air to and from the lungs. 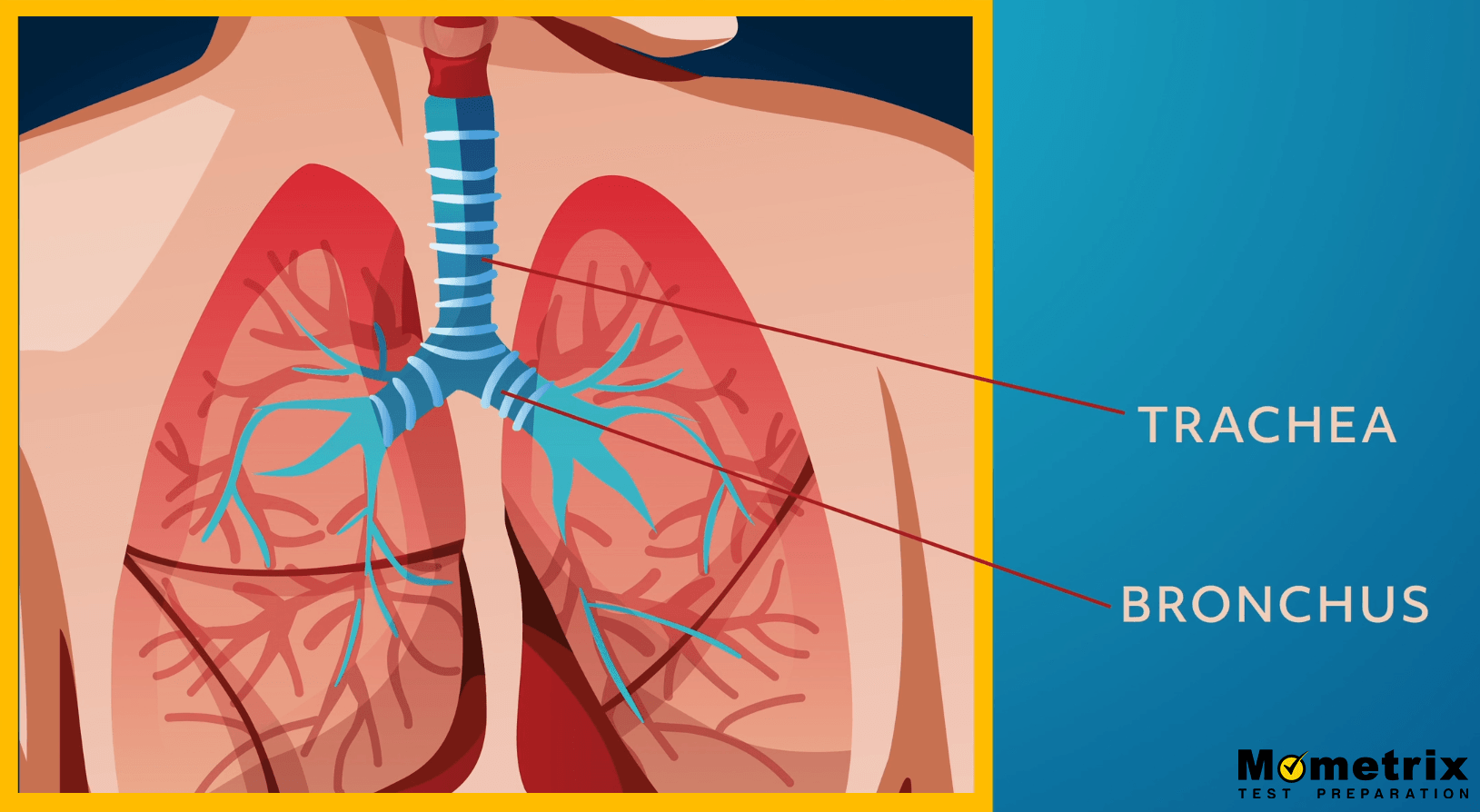 The diaphragm is the primary muscle used in breathing, contracting in and out as you breathe. The diaphragm is located below the heart and lungs. It has three main openings and they each provide a critical function. That’s because these openings let other structures pass between the chest and the abdomen.

The esophageal opening provides a passageway for the esophagus and vagus nerve. The aortic opening allows the aorta and thoracic duct to pass through. The aorta transports blood from the heart and is the body’s main artery, while the thoracic duct is the lymphatic system’s main vessel.

Now that we understand the upper and lower respiratory tract, let’s take a look at the respiratory system zones. 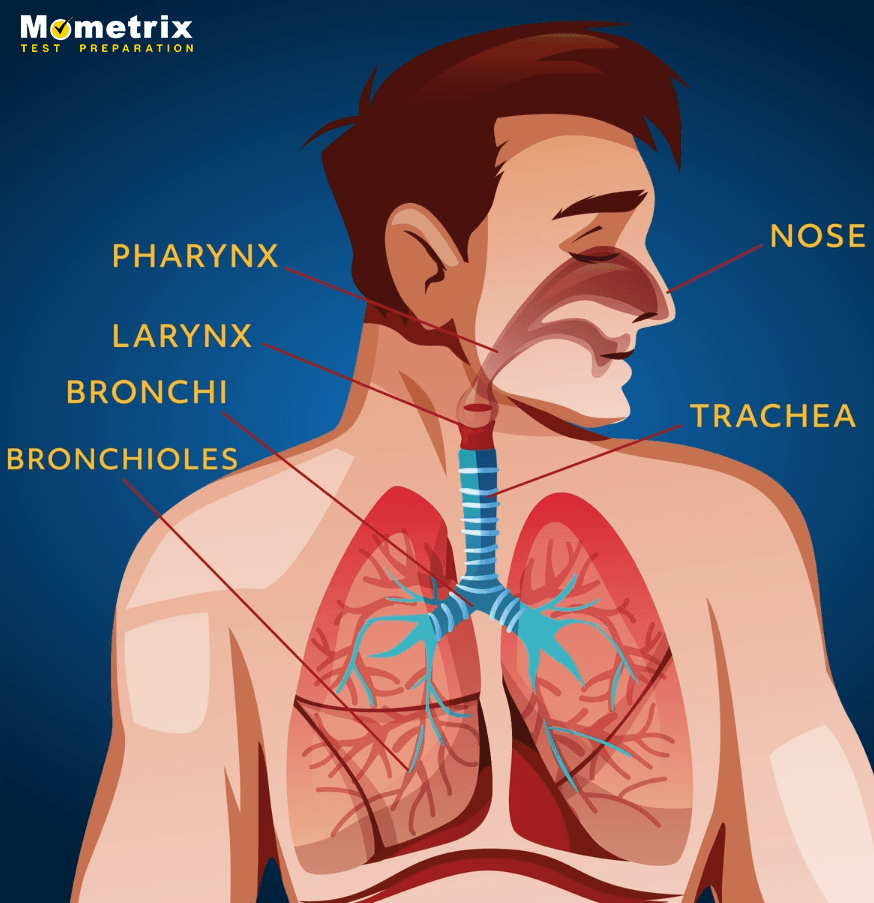 It’s important to remember that all structures in the conducting zone only deal with air. 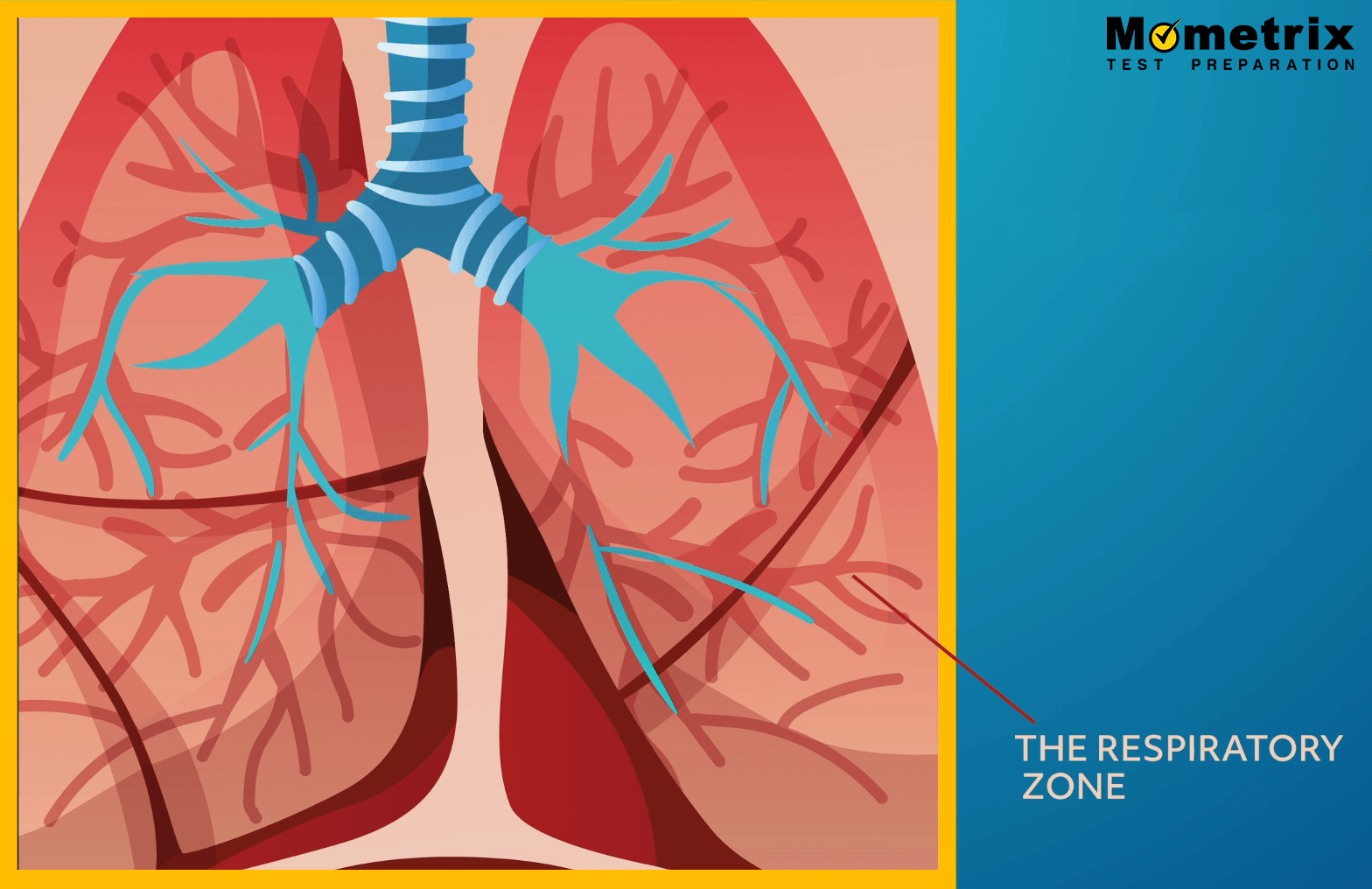 The alveoli are very small air sacs in the site of the exchange of oxygen and carbon dioxide. The bronchi are the main passageways attached to the lungs, and the bronchiole connects the bronchi to the alveoli. Now that we understand the respiratory zone, let’s talk more about ventilation.

Hyperventilation and hypoventilation can occur while breathing, and both can make you sick. Hyperventilation happens when you breathe faster than normal. When you breathe fast, you take in too much oxygen in the blood, and that can make you feel faint or dizzy. During hypoventilation, you’re breathing too slowly, and that results in too much carbon dioxide entering the bloodstream. That can result in fatigue, headaches, and other illnesses.

So that’s our overview of the respiratory system, the part of our body that helps us breathe while expelling carbon dioxide from our system. I hope this overview was helpful!