Projectile motion occurs any time an object is thrown or launched into the air and falls back to the ground. With physics, it’s possible to predict things like where the object will land and the amount of time it will take for the object to reach the ground. Our ability to predict these values depends on the information we have about the scenario.

When you begin a projectile motion problem, the first thing you’ll have to do is think about the trajectory of the object. In other words, consider the direction the object is moving. Is all of the motion vertical, like an object falling to the ground? Or is the object launched or thrown at some angle? It helps to draw out the trajectory if it isn’t already given to you. Even an approximation can be helpful in visualizing the situation. You’ll want to determine your starting point, end point, and the path of travel. 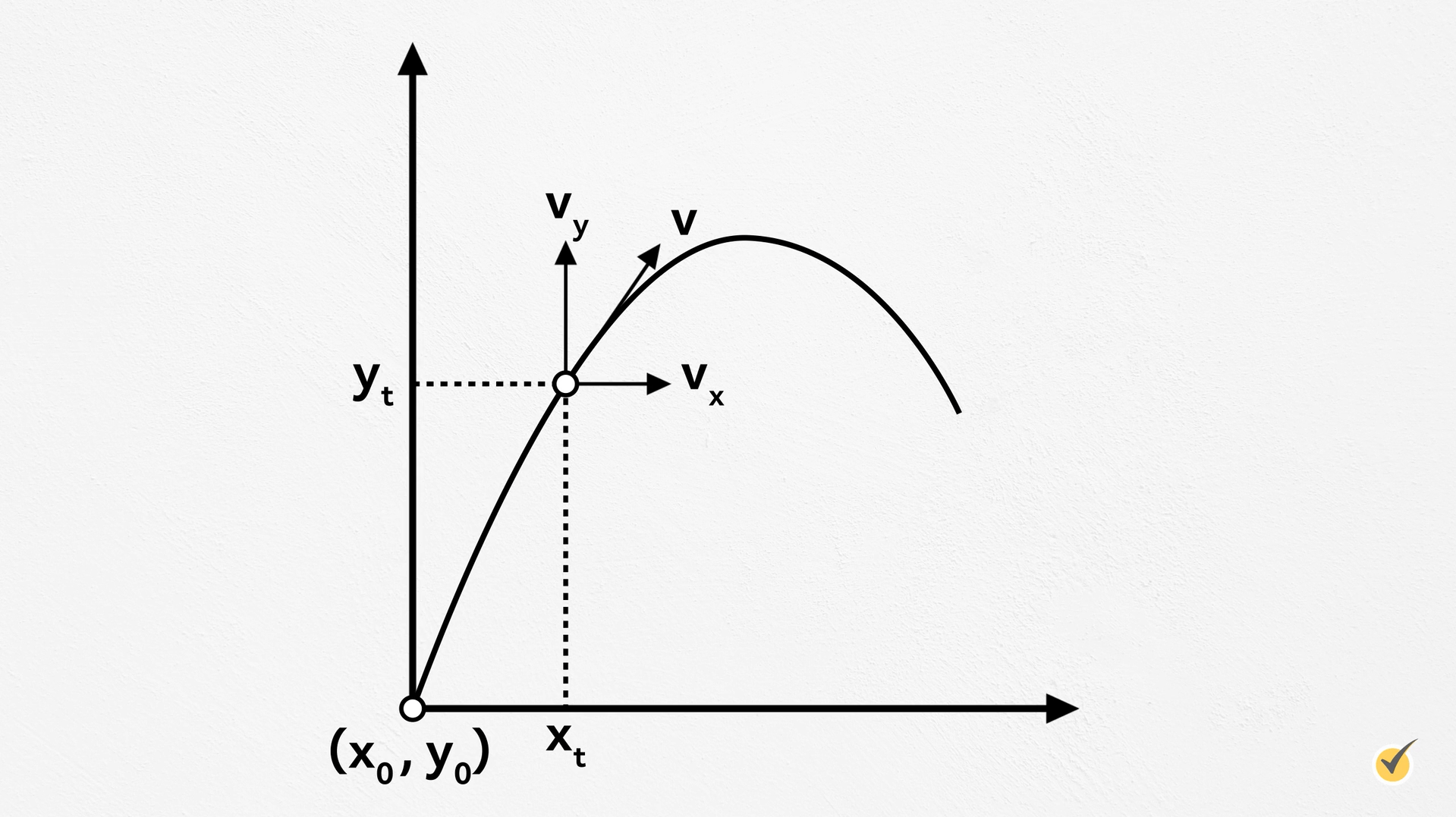 For every projectile motion problem we’ll have a set of variables in each direction. Let’s quickly go over what each of these variables are.

So, there appears to be a lot to keep track of in these projectile motion problems! But, before you give up and throw out your physics book, check out these simplifications.

So how do you put all of these variables together to describe the motion of an object? You may have already been introduced to the kinematic equations. With this set of equations and the handy tips we discussed, you can solve any projectile motion problem.

Don’t worry; you won’t have to use all of these equations for every problem! The trick to these problems is to be methodical. It helps to follow these steps:

Let’s look at an example of one of the most common kinds of projectile motion problems.

Imagine you kick a ball off a cliff at a speed of 12 meters per second. The ball goes straight along the ground until it is over the cliff, which is 30 meters high. How long does it take for the ball to land? How far away does the ball land? 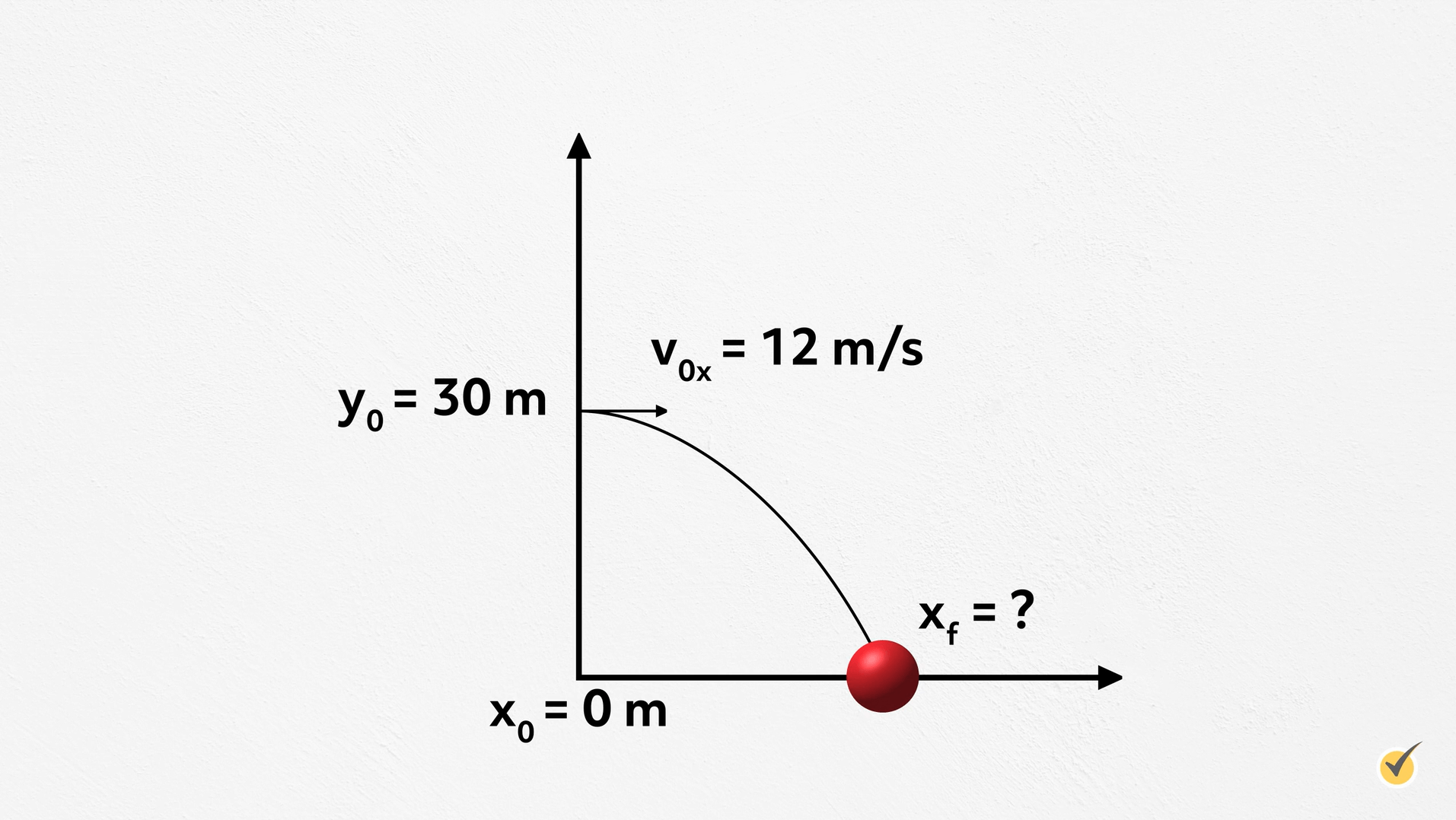 Now, what do we need to find?

We are asked for the time, t. If we look back at our kinematic equations, we can figure out which equation to use to get the time it takes for the ball to hit the ground.

First, subtract 30 from both sides of the equation,

Then, just take the square root of both sides to get t ≈ 2.5 seconds. This seems like a reasonable answer. It should only take a few seconds for a ball to fall 30 meters.

Now, we can find how far away the ball lands. Looking back at our equations, it makes sense to use the same equations, but for the \(x\) components this time. Remember there is no acceleration in the \(x\) direction, so that is zero, eliminating the last term.

The ball lands about 30 meters away from the cliff.

Another type of projectile motion problem involves the object being shot upward into the air at an angle before falling back down. In this case, the initial velocity has both an \(x\) and \(y\) component and you’ll have to use simple trigonometry to determine \(v_{0x}\) and \(v_{0y}\).

Now that we’ve gone through a thorough overview of projectile motion, let’s test your knowledge with a few practice problems!

1. Imagine throwing a rock straight up into the air at a vertical velocity of 4 m/s, so that it goes up to a height of 2 meters before it falls back down into your hand. Is there any point in the rock’s trajectory that its vertical velocity is zero?

The rock’s velocity decreases from 4 m/s to 0 m/s when it reaches the height of 2 m. Then, it increases in speed again on the way down, but in the opposite direction.

The correct answer is: A.

If there is no acceleration, that means the velocity must be constant. Gravity only acts in the vertical direction.