What is a Nonpolar Covalent Bond?

Remember, there are a few different types of chemical bonds. Ionic, metallic, and covalent are the main categories. Covalent bonds are formed when atoms share their valence electrons. For example, when two chlorine atoms come together, each donates one electron to the bond.

Generally, atoms that form covalent bonds are the nonmetals in the top right of the periodic table, like carbon, oxygen, nitrogen, sulfur, phosphorus, and the halogens. Hydrogen is also included, even though it’s not in the top right. These are the atoms we see in organic chemistry.

Even though we’re dealing with a small subset of the periodic table, covalent bonds vary drastically in their properties—particularly, in their polarity.

Let’s define that term, as it’s the focus of this video. The polarity of a covalent bond describes the distribution of the shared electrons in that bond. The more unequal the distribution, the more polar the bond.

Perhaps when you learned about covalent bonds, the default picture in your head was of electrons that were equally shared. This is the case in nonpolar bonds, where the electrons are indeed more or less shared equally between the two atoms. But that’s not always the case.

In polar covalent bonds, the electrons are not distributed equally between the two atoms. One atom in the bond attracts the electrons more than the other, which results in the electrons spending more time around that atom. This creates areas of partial positive charge and partial negative charge—or partially charged “poles”, thus the word polarity.

Partial charge is denoted using a lower case sigma and polar bonds are often depicted using shading or the polar arrow. In shading, red indicates areas of partial negative charge and blue represents areas of partial positive charge. The head of the polar arrow points to the negative end of the bond and the plus sign, logically, is at the positive end of the bond.

A couple of questions may have immediately formed in your mind as we went over this material. Why do some atoms attract bonding electrons more than others? Can we assess polarity just by the chemical formula? How does polarity impact the chemical and physical properties of a molecule? These are great questions.

First, the tendency for some atoms to attract bonding electrons more strongly than others is described by their electronegativity. Atoms tend to be more electronegative when they are smaller and have large nuclear charges, which results in a stronger pull on the bonding electrons by the nucleus of the atom. This is a very similar property to the electron affinity of an atom, which describes a free atom’s pull on an electron. Thus, similar to the trends in electron affinity, as we go from left to right and up the periodic table, elements get more electronegative, with the exception of the noble gases. This means fluorine is the most electronegative element. The elements have been assigned relative values of electronegativities on the Pauling scale, where fluorine has the highest value of 4. Don’t worry, it’s unlikely that you’ll ever have to memorize these numbers. Most of the time, you will be able to reference them and with some practice, you’ll begin to remember the relative values and won’t need them anymore. 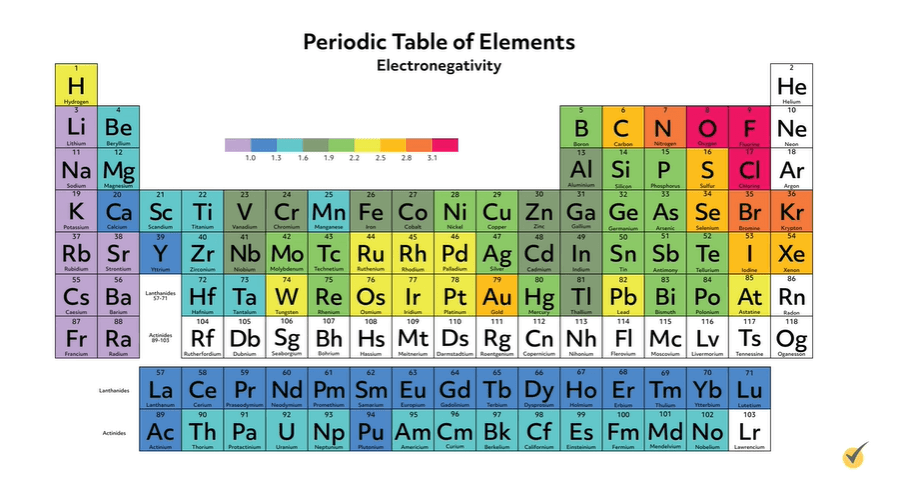 The quantitative rule of thumb is that when the difference between the atom’s electronegativities is between 0.4 and 1.8, the bond is considered polar and anything less than 0.4 is nonpolar.

Take for example, hydrogen fluoride. Fluorine is much more electronegative than hydrogen; by the Pauling scale, their difference is 1.8, so it’s a very polar bond. Thus, the bonding electrons spend much more time around the fluorine atom than the hydrogen atom. This leaves the fluorine end of the bond with a partial negative charge and the hydrogen end of the bond with a partial positive charge.

Conversely, in carbon hydrogen bonds, their respective electronegativities are relatively similar, a difference of only 0.35 on the Pauling scale. Thus, the bonding electrons spend approximately equal time around the two atoms and there are no areas of partial charge. Again, these bonds are called nonpolar.

Remember that when assessing bond polarities, it’s not enough to simply see an electronegative atom to know that it’s a polar bond. If the other atom is similarly electronegative, then the electrons will be equally shared and the bond is nonpolar. So going back to our chlorine example, even though chlorine is the third most electronegative element, the chlorine-chlorine bond is nonpolar because the chlorines are attracting the electrons equally. However, bond that chlorine to a carbon and you have yourself a polar bond.

Lastly, let’s address that third question about the impact of polarity.

Remember that in polar bonds, there are areas of partial positive and negative charges. This creates an opportunity for attractive interactions. Polar bonds can line up with other polar bonds; these are called dipole-dipole interactions.

They are weak in comparison to ionic, metallic, or covalent bonds, but in aggregate, they account for many of the chemical and physical properties of molecular compounds. In contrast, because nonpolar bonds are more or less neutral throughout, their intermolecular interactions are much weaker.

Let’s wrap up today’s video with some practice. To this point, we have only considered diatomic molecules, but we can also assign the polarity of bonds within larger molecules. Here’s a quick example with chloromethane. The chlorine is significantly more electronegative than the carbon atom, making that chlorine-carbon bond polar. So, we’ll mark it with a polar arrow pointing towards the chlorine. On the other hand, the carbon-hydrogen bonds are all nonpolar, so we can leave them without an arrow.

Now, copy down the structure for acetic acid and do the same thing, drawing polar arrows for any polar bond. Refer to the Pauling scale here if you need it. 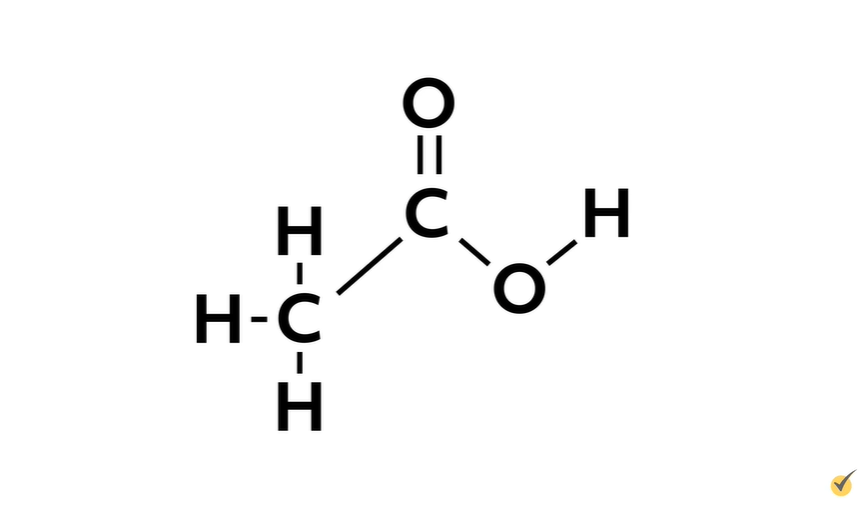 Alright, oxygen is more electronegative than both carbon (a difference of 0.89) and hydrogen (a difference of 1.24), so we can draw in polar arrows showing partial negative charges on both oxygens. This leaves the central carbon and the hydrogen that is attached to the oxygen partially positive, while the group of carbon-hydrogen bonds is nonpolar. 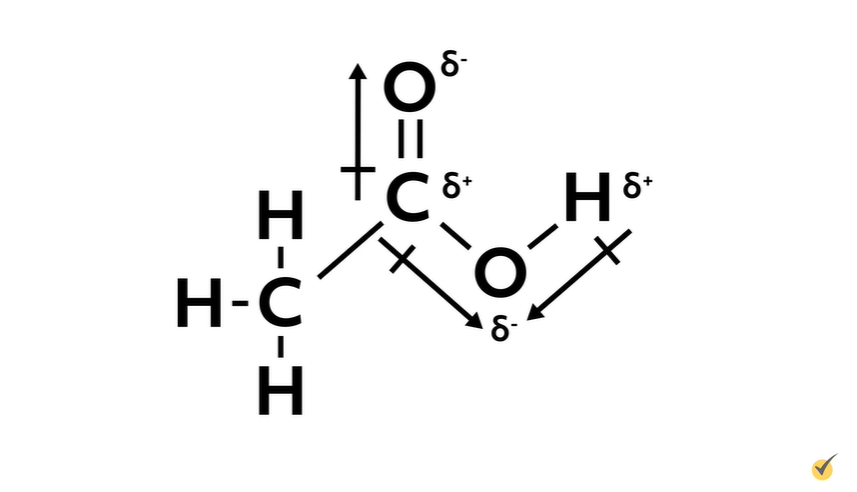 Alright, that’s all for this review! Thanks for watching, and happy studying!