What is Newton’s Second Law of Motion?

Newton’s second law can be considered an extension of the first law for the situation where the sum of the net external forces is non-zero. As with Newton’s first law, the internal forces are not included, and it can only be applied in an inertial frame of reference.

Let’s take a look at both a one-dimensional and a two-dimensional example to illustrate some applications of Newton’s second law.

Let’s say you have someone pushing a piano across a stage. In this example, we are interested in the moment when the person pushes the piano with just enough force to get it moving.

When the person pushes with enough force to overcome the frictional forces resisting motion, the piano goes from a zero velocity to a non-zero velocity, and any change in velocity constitutes an acceleration.

Thus, during the time when the velocity is changing, the net external force causes an acceleration, and Newton’s second law comes into play.

For the sake of completion, let’s toss some numbers into our equation to get an idea of the numerical value of the acceleration.

Newton’s first law tells us that any pushing force greater than 20 Newtons will get the piano moving. While the person may not have made the numerical calculation we did, they intuitively knew they had to push with a force greater than the number we calculated. So let’s say they push with a force of 30 Newtons and calculate the acceleration using Newton’s second law, assuming the piano has a mass of 200 kg. Restating Newton’s second law as the sum of the external forces in the \(x\)-direction is equal to the push force minus the force of the piano pushing back, substituting in the values we discussed, and solving for the acceleration yields a value of \(0.05\text{ m/s}^{2}\) for the acceleration.

Let’s take a look at a 2D example using Newton’s second law. In this example, we will also use a static inertial frame of reference fixed on the origin of our mass. 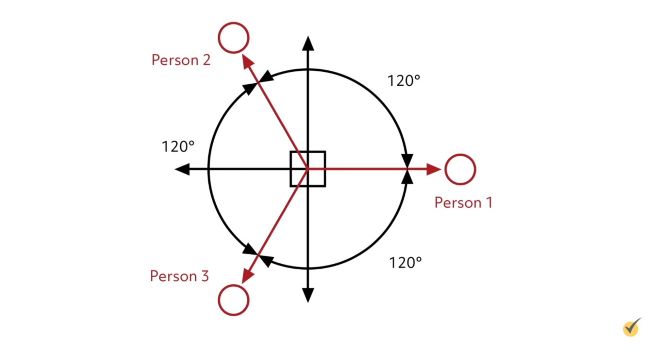 Imagine you’re involved in a three-way tug-of-war. Each person is 120 degrees from the other, and the \(x\)-axis is lined up with one of the “warriors.”

If we state Newton’s laws for the three forces, we can see that Newton’s first law holds.

Let’s say that the person aligned with the \(x\)-axis impulsively pulls with a force 1.3 times the force of the others. Using Newton’s second law, we can calculate the acceleration of the center and the two people on the left. Let’s assume that each person has the same mass of 50 kg and the rope has negligible mass. The mass of the system is then 150 kg. Now, let’s say that \(F\) is equal to 100 Newtons. Substituting those values into the force equation in the \(x\)-direction, and simplifying, we can calculate the acceleration.

Intuitively, we know the direction of the acceleration is along the positive \(x\)-axis, and Newton’s Second Law gives the quantitative value for the acceleration, which we calculated to be zero point two meters per second squared.

We just saw simple one- and two-dimensional applications of Newton’s second law. When applying these principles to more complex examples, keep in mind that the concepts are the same, but the algebra may be a little more involved. Nonetheless, Newton’s laws can be used to calculate the motion of all bodies in space, as long as they are moving in an inertial frame of reference.

To wrap things up, let’s go over a few review questions!

1. True or False: Unlike Newton’s first law, Newton’s second law is valid for bodies in motion in both inertial and non-inertial frames of reference.

The correct answer is FALSE.

Both Newton’s first and second laws are similar in that they account for motion in inertial reference frames.

2. True or False: Newton’s second law is only valid for bodies with constant acceleration.

The correct answer is FALSE:

Newton’s second law can be used to find any acceleration. The equations of motion are only suitable for use when the acceleration is constant.

3. Calculate the acceleration of the body in the diagram given the parameters indicated, assuming the mass is not lifted from the ground. Also calculate the force from the floor.

Here’s the correct calculation of the acceleration of the body, assuming the mass is not lifted from the ground:

And here is the correct calculation of the force from the floor:

And here is the correct calculation of the force from the floor:

That’s all for this review. Thanks for watching, and happy studying!