Sexual reproduction in eukaryotes involves a form of cell division known as meiosis. It has several different stages that are carried out to let one diploid germ cell result in 4 haploid gametes.

In this first part, this would be interphase.

It’s kind of before meiosis starts, but it has to do with it, because this diploid germ cell contains genetic information from both maternal and paternal parents. You’ve got female and male genetic material in this one diploid germ cell.

It’s getting ready to divide to carry out sexual reproduction. We have replication going on in here. Each chromosome is going to double itself so that there’s extra genetic material to carry out this process.

In the next phase, we have prophase.

The replicated genetic material is going to line up in homologous pairs, which means that each one is the same genetic material, it’s an exact copy, and they’re going to cross over a little bit at these points here.

Where those cross over, they kind of swap a little bit of genetic material. Each one of these pairs is going to take a little bit of the other pair. That is called “crossing over,” or “recombination.”

You’re just jumbling up the maternal and paternal bits before the division starts to take place.

Then, we move onto metaphase. In metaphase, your centrosomes are starting to pull the homologous pairs apart.

Then, we move on to anaphase. You can see they actually are getting pulled further apart. They’re not crossing over anymore, and they’re starting to move to opposite sides of the cell. These are all prophase I, metaphase I, anaphase I, because this is a two-step process.

Then, we keep going.

In telophase I, there’s the cleavage furrow that’s preparing for the cells to separate and become two distinct separate cells. There is a nucleus being reformed.

The microtubules that have been connecting the chromosomes and pulling them apart have receded and the genetic material is encased in a nucleus again.

Then, this last part is cytokinesis I, where the cytoplasm is split and there is a definite split made between those two cells.

We’re going to go through what is known as “meiosis II”, the second step in this process.

We have prophase II. In this phase, you’ll see we’ve got the two daughter cells.

Now they are kind of repeating the same process that happened up top. There’s no replication, because that was in interphase, but they are going to start having the centrosomes move down to either side and start moving out to opposite poles of the cell and start pulling the chromosomes that way.

The next phase, we’ve got metaphase II. You can see that the chromosomes have lined up along the equatorial plate in both of these daughter cells. The microtubules are connecting them to the centrosomes and they’re going to start pulling apart.

In our next phase, anaphase II, you can see that actually happen. The chromosome pairs have gotten pulled apart, and now these individual chromatids are on separate sides of the cell and they’re still going to be reeled in by the microtubules at this point.

We move on to telophase II, where we’ve got a nucleus forming around our new pairs of genetic material that have both the mother and father genetic material in each nucleus. They’re all split up now. We have the cleavage furrow again.

The cells are getting ready to divide permanently. Your centrosomes have separated to the opposite side still, and the microtubules have retracted.

Then, we go to cytokinesis II, which is where the cytoplasm is divided between these two new cells and these two new cells, and now we’ve got four haploid gametes, which means that they each just have one set of genetic information and they’re going to need a partner to be able to reproduce.

Meiosis goes through the same phases as mitosis, but they’re a little bit different. Instead of just getting an exact copy, you’re mixing genetic material from two different organisms, a maternal and paternal parent, and at the end you’re going to have the four haploid gametes that each has genetic information from both parents.

Meiosis is a process of cellular replication that produces germ (sex) cells that are genetically different, having half the number of chromosomes of the parent cells. 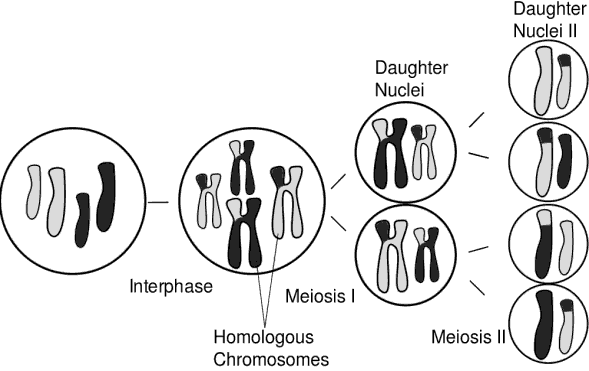 What is the purpose of meiosis?

The purpose of meiosis is to produce sex cells, or gametes, that are genetically different.

Where does meiosis occur?

Meiosis occurs in reproductive cells, which are also known as germ cells.

When does crossing over occur in meiosis?

Crossing over occurs during Meiosis 1 – specifically in prophase 1.

How many daughter cells are produced in meiosis?

What is the end result of meiosis?

The end result of meiosis is four haploid daughter cells, which have half the number of chromosomes of the parent cell, that are genetically different.

What type of cell undergoes meiosis?

A germline (germ) cell undergoes meiosis, or cells that are in the reproductive organs.