Hi, and welcome to this video on Kingdom Plantae! Kingdom Plantae is a large and diverse group of organisms, containing over 300,000 species of plants. Today, we’ll look at plants’ unique features that allow us to eat and breathe, and we’ll talk about how to classify them. Let’s get started!

First, let’s talk about what plants are. Plants are eukaryotes, meaning they have a nucleus and other organelles in their cells that carry out cellular processes that keep the plant alive.

They also have a cell wall, which is made up of cellulose and helps maintain the integrity of the cell and the plant’s overall structure. Unlike animals, plants are considered autotrophs, meaning they are responsible for making their own food. They use energy from the sun to convert carbon dioxide and water into glucose, as well as oxygen as a byproduct.

This process, which is unique to plants, is photosynthesis.

Now, let’s think about how plants are grown. Where does the growing process start? You’re probably most familiar with plants that are grown from seeds that were produced by a “parent plant”. However, there are lots of plants that do not grow from seeds, and instead grow from alternative sources. We’ll come back to those in a second. Plants that do have seeds can be classified as either gymnosperms or angiosperms.

Gymnosperm basically means “naked seed”, so these plants have an exposed seed, like pine trees or sago palms. 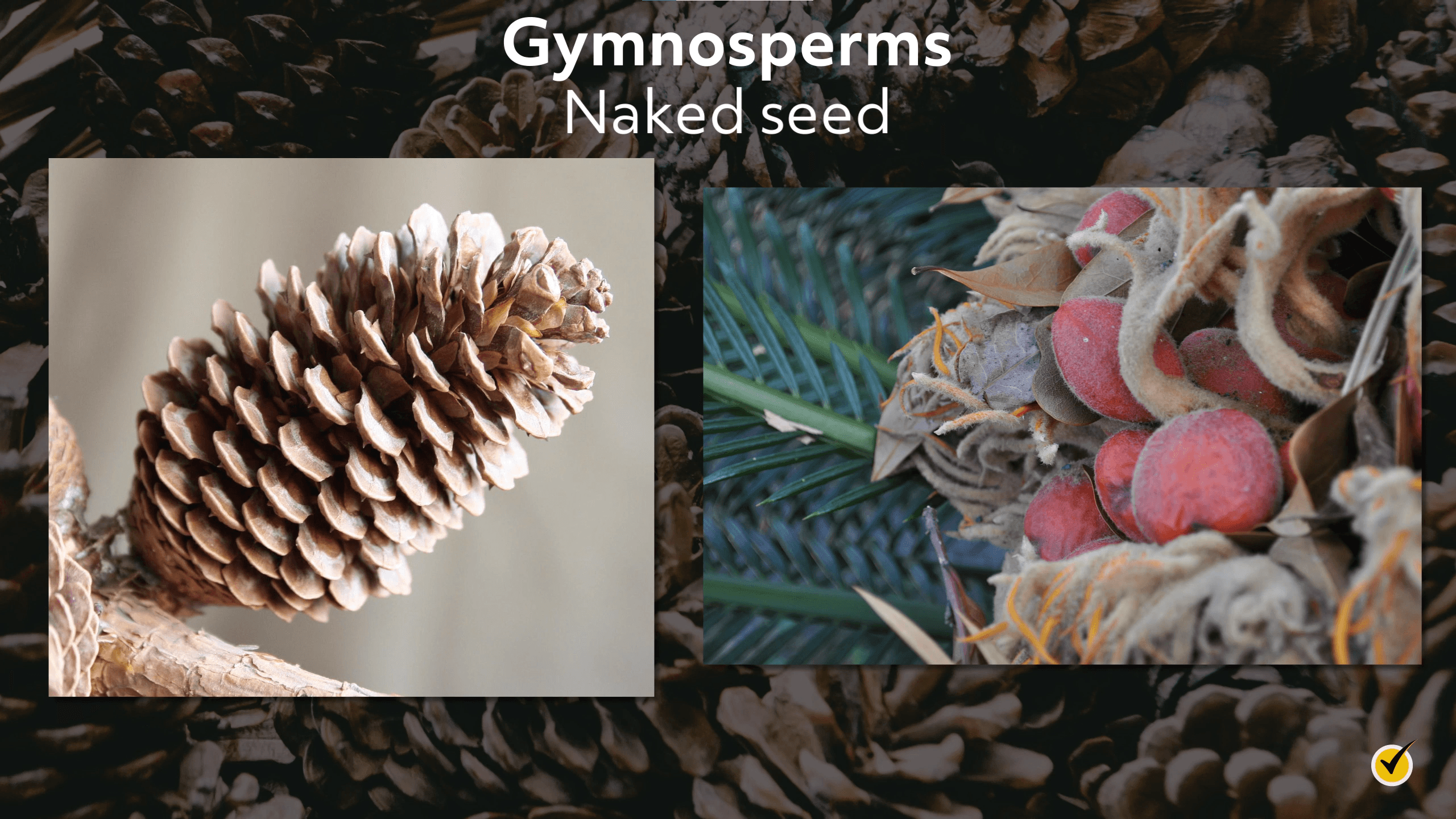 Angiosperms have seeds that are enclosed within an ovary, like a tomato or a peach. 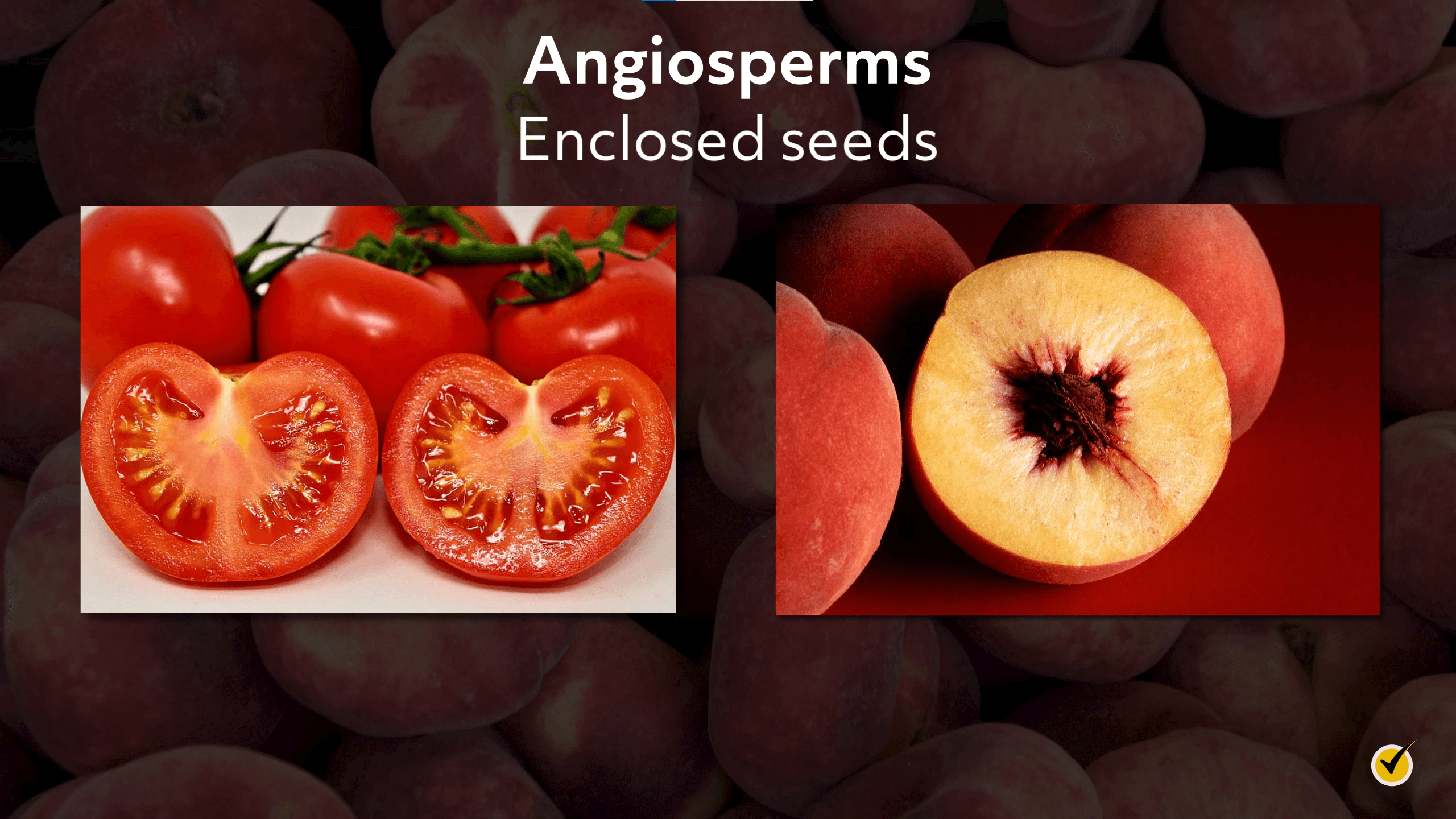 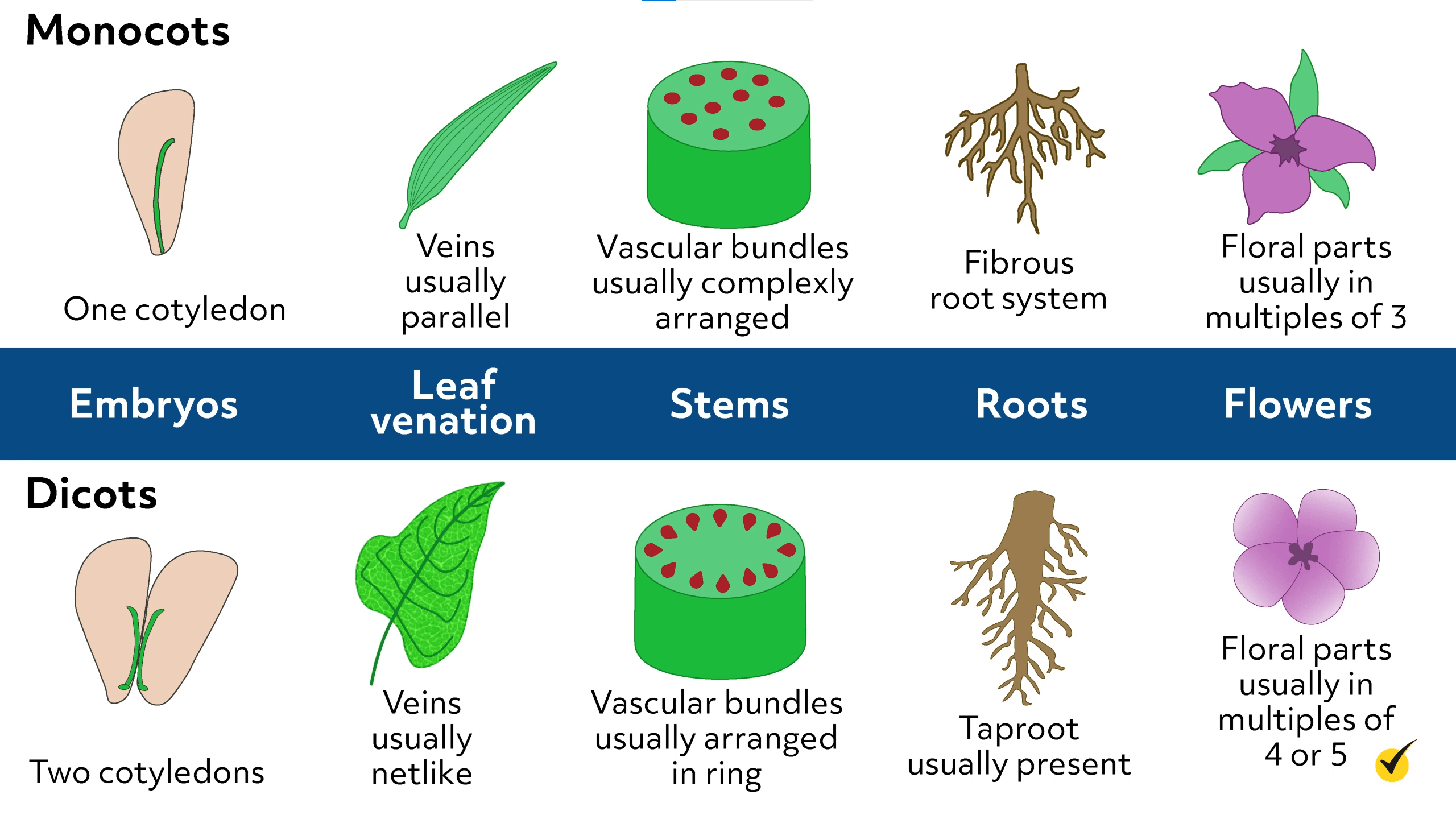 Monocots get their name from having only one cotyledon, a specific part of the seed that grows leaves. They have long, narrow leaves with parallel veins and flowers with petals that are in groups of three or multiples of three. Their roots form a network of fibrous roots that all arise from the stem of the plants. Grass and bamboo are both examples of monocots.

Dicots get their name from having two cotyledons rather than one. They have oval-shaped leaves with net-like veins and petals in groups of four or five. They have one main root called the taproot, with smaller roots branching off of it. Oak trees and roses are both examples of dicots.

As I mentioned before, some plants, like ferns and moss, don’t have seeds, so they have to reproduce in other ways. Some reproduce asexually with spores, rhizomes, budding, and other methods that we’ll talk about a little later. 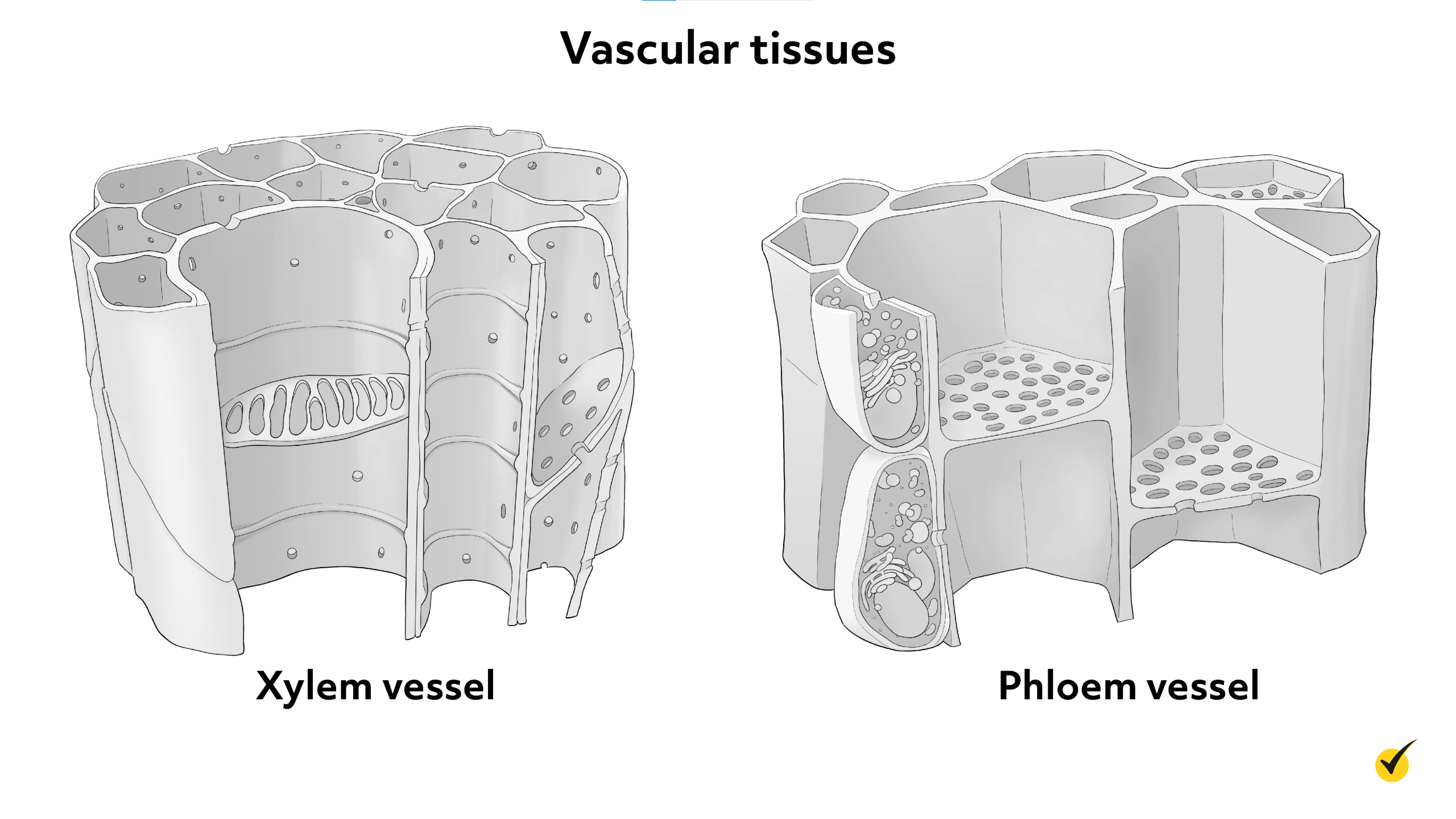 Xylem is primarily responsible for transporting water and dissolved minerals unidirectionally from the roots to stems and leaves. This tissue also helps support the plant. Phloem transports dissolved sugars and other nutrients bidirectionally through live cells for the purpose of transporting energy from photosynthetic parts of the plant to non-photosynthetic areas, like root cells. Non-vascular plants, like moss, don’t have roots and instead absorb water through osmosis.

We can also classify plants based on their means of reproduction. Specifically, flowering plants or angiosperms can be bisexual, meaning they have both male and female features, or unisexual, meaning they have either male or female features. Stem-like structures called stamen are considered to be the male feature in plants. The end of the stamen is called the anther, and this is where pollen is produced. Pollen contains sperm, so in order to form a proper plant zygote, we also need a female gamete. The carpel serves as the female reproductive organ and contains a stigma, style, and ovary, which contains the egg. Plants can be fertilized by self-pollination, where a bisexual plant will release pollen and land on its own stigma. Or they can fertilize through cross pollination, where bisexual or unisexual plants will release pollen that lands on another plant’s stigma. This occurs by pollinating agents like bees, wind, and rain. When pollen meets with the stigma either by self-pollination or cross-pollination, the sperm in the pollen is able to travel down into the pollen tube, which punctures an opening in the ovule so the egg can be fertilized. The fertilized egg becomes the seed and is able to germinate and form another mature plant over time.

Let’s look at how a plant reproduces sexually in a little more detail. 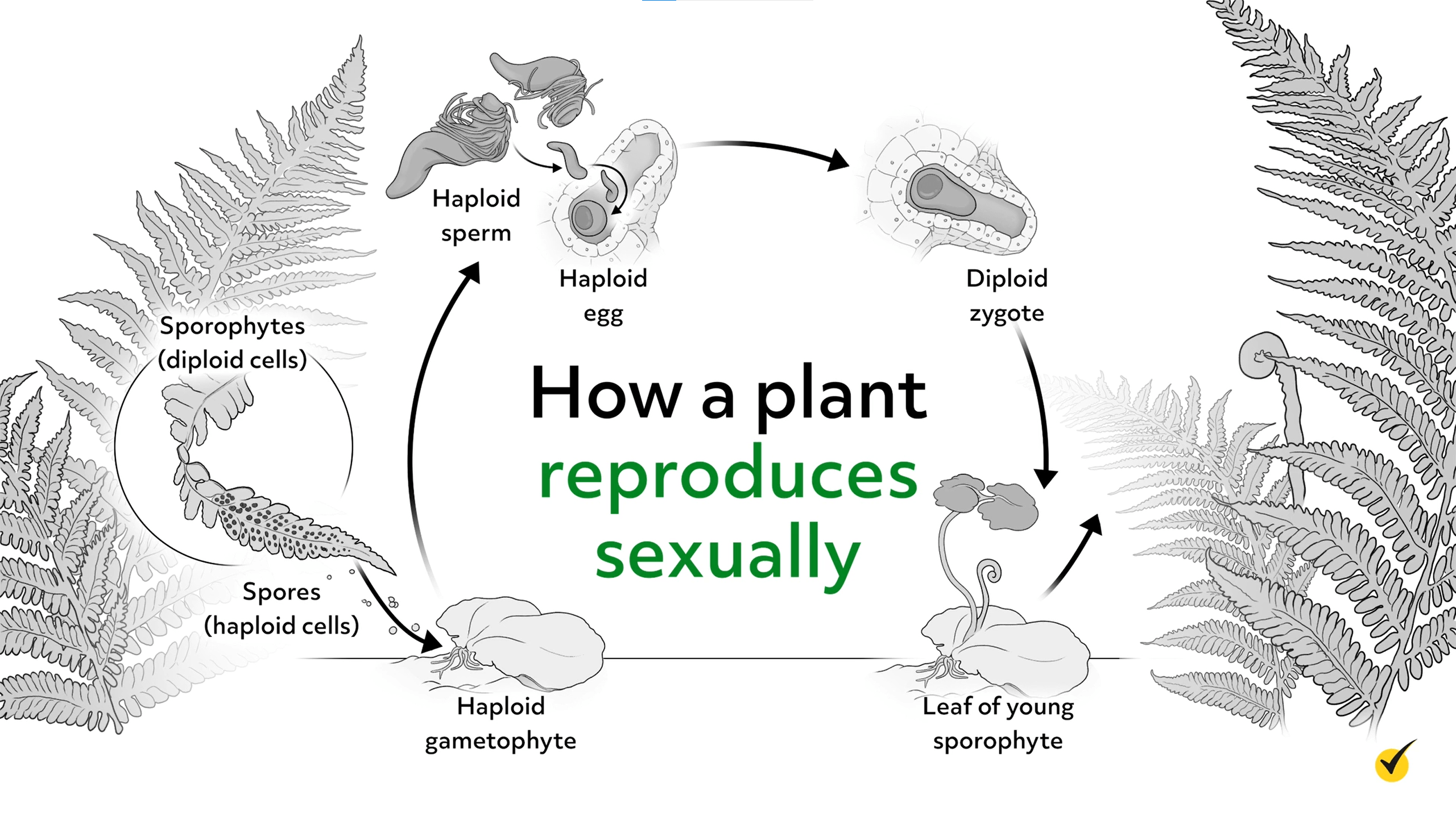 Some plants don’t have to reproduce sexually. Instead of having distinct male and female anatomy or seeds of some kind, some plants will reproduce asexually in a variety of ways. The most common method is called fragmentation of vegetative propagation. Parts of the parent plant will separate and form new plant offspring. These new plants will form their own root systems and continue to grow until they need to repeat the process. We see this with weeds like dandelions or with rhizome and bulb-based plants like potatoes and tulips respectively. Rhizomes and bulbs form nodes from the parent plant underground and send shoots to the surface. Rhizomes, however, form a horizontal system of many connected nodes while bulbs form independently of one another. Although most plants that reproduce asexually are seedless, there are exceptions. Some plants like blackberries have seeds and reproduce asexually. Mosses are another exception–they can reproduce both sexually and asexually.

Ok, now that we’ve covered everything, here’s a quick recap!

Plants are eukaryotic organisms that perform photosynthesis to create glucose and oxygen. Vascular plants have leaves, stems, and roots, while nonvascular plants rely on osmosis to absorb water. Many plants reproduce by seeds, but some use spores or reproduce asexually via vegetative reproduction.