Hey guys, and welcome to this Mometrix video about the gastrointestinal system.

So what happens once we ingest our food? Let’s find out.

We all have a gastrointestinal tract, called the GI tract. This long passageway starts at our mouth and ends at our anus. Think of the GI tract as the entrance and exit point of our food. The GI tract is also called the digestive tract or the alimentary canal. Yes, the GI tract passes a number of solid and hollow organs, and we’re going to take a closer look at those now.

The GI tract has three solid organs: the liver, the gallbladder, and the pancreas. The mouth, esophagus, stomach, small intestine, large intestines, and anus are the hollow organs. Those hollow organs push food through our bodies via a process called peristalsis. It’s the push and pull that allows food to move from one muscle to another. The muscle behind the food contracts and the muscle in front of the food relaxes, allowing for easy passage.

That’s the short of how food moves through the body. Now we’ll take a journey through the gastrointestinal system and a more detailed look at its parts.

We’ll start at the mouth, the place that chews and ingests our food. After chewing, we swallow, and the tongue plays its important role by pushing the food into our throat.

The epiglottis, a small flap, covers the windpipe so food doesn’t get stuck there.

And now that we’ve swallowed the food, the digestive journey starts.

After we swallow, the food passes through the esophagus and at that point peristalsis begins.

When the food reaches the end of the esophagus, it passes through the lower esophageal sphincter and then into the stomach.

Have you ever gotten heartburn or acid reflux? You see, the sphincter is supposed to stay closed, so food doesn’t back up into the esophagus. When the sphincter relaxes at the wrong time, and food backs up, well, you get that heartburn feeling.

But if everything goes as it should, the food has now made its way into our stomach, and that’s where it goes for a nice digestive swim. Digestive juices coat the food and liquid and break them down so they can continue their journey through our bodies.

But before we continue along our journey, we need to talk a little more about the stomach, a single organ that has five different parts.

Parts of the Stomach 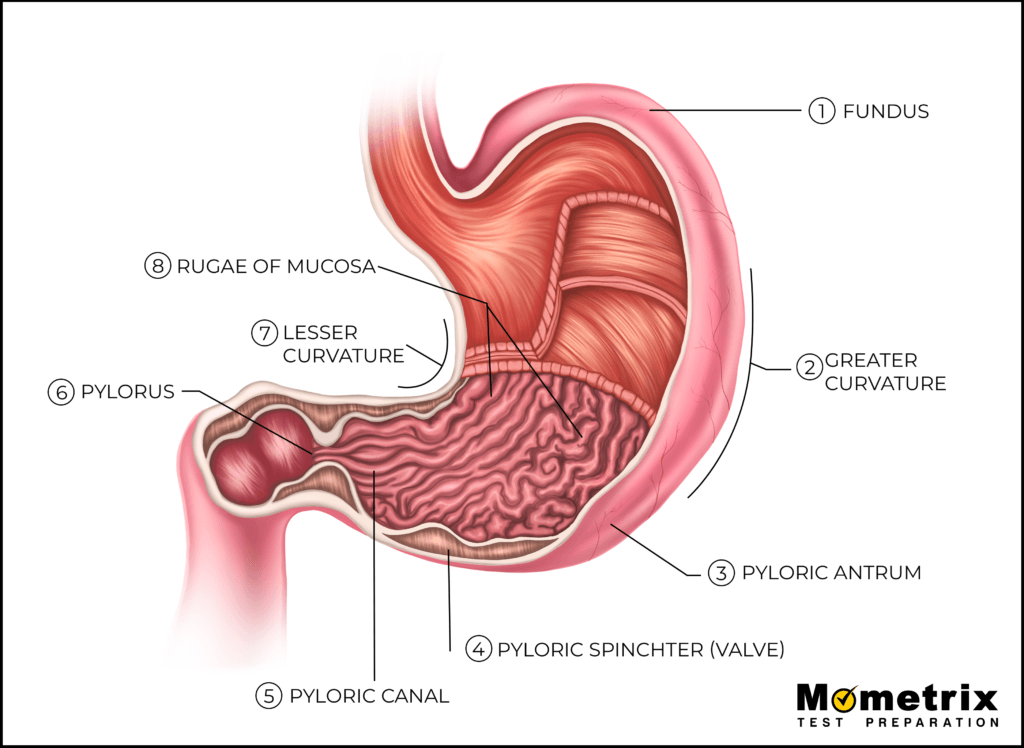 The first section, the duodenum, is the smallest section. When food passes from the stomach, it enters the duodenum through the pylorus.

The last part, called the ileum, absorbs nutrients that were not digested by the jejunum. Those nutrients include carbohydrates, minerals, and fats.

As food leaves the small intestine, it enters the large intestine.

Let’s continue our journey. Food has moved from the small to the large intestine and has made its way to the transverse colon. The next stop: the descending colon.

The descending colon stores food before it’s emptied into the rectum. It’s also the point at which feces starts to become solid.

From there, waste enters the sigmoid colon, and that’s where waste solidifies. The muscular walls of the sigmoid colon contract to push feces into the next part of the gastrointestinal system: the rectum.

The rectum acts as a holding tank for waste. The rectum holds feces until it’s ready to be expelled. In other words, that’s where waste stays until you’re ready to use the bathroom. From there, the waste exits through the final stop in the gastrointestinal system, the anus.

So that’s the journey food takes.

Now, let’s take a closer look at the enzyme production in the gastrointestinal system.

Carbs, proteins, nucleic acids, and lipids are all major elements in biological molecules. Life can’t exist if the body is missing any one of these molecules. So it’s no surprise they each play a role in the gastrointestinal system. Here’s how.

Enzymes that Break Down Carbs

There are three enzymes that help break down carbohydrates. The salivary amylase enzyme in the salivary gland helps break down starches and sugars. The process takes place in your mouth. Pancreatic amylase in the pancreas completes carb digestion and produces glucose. Lastly, the maltase enzyme in the small intestine breaks down disaccharides into single sugars.

Enzymes that Break Down Proteins

Enzymes that Break Down Nucleic Acids

Enzymes that Break Down Lipids

Lipids, those fatty and oily substances in the bloodstream, are broken down by lipase and bile salt. Lipase is found in the pancreas, while the liver makes bile salts and the gallbladder stores it. Technically, bile isn’t an enzyme. It’s a salt that mixes, or emulsifies, lipid into fatty acids.

We mentioned cells and patches, and they also play an important role.

Chief cells, located in the stomach, convert pepsinogen to pepsin, which we already know helps digest protein. Goblet cells, found in the respiratory and intestinal tracts, secrets mucus. Parietal cells are crucial to the production of hydrochloric acid (HC1), which helps with digestion. Finally, Peyer’s patches, the lymphatic tissues found in the ileum of the small intestine, protect the gastrointestinal tract from pathogens.