The heart is a muscle that sits in the upper left side of the chest behind the rib cage. It weighs roughly 10 ounces and is about the size of a clenched fist. The heart is made up of a system of chambers and valves; the chambers momentarily hold blood while the valves allow blood to flow in one direction to the next chamber. It beats about 100,000 times a day and sends blood throughout some 60,000 miles of blood vessels. There are several components that help the heart function properly. 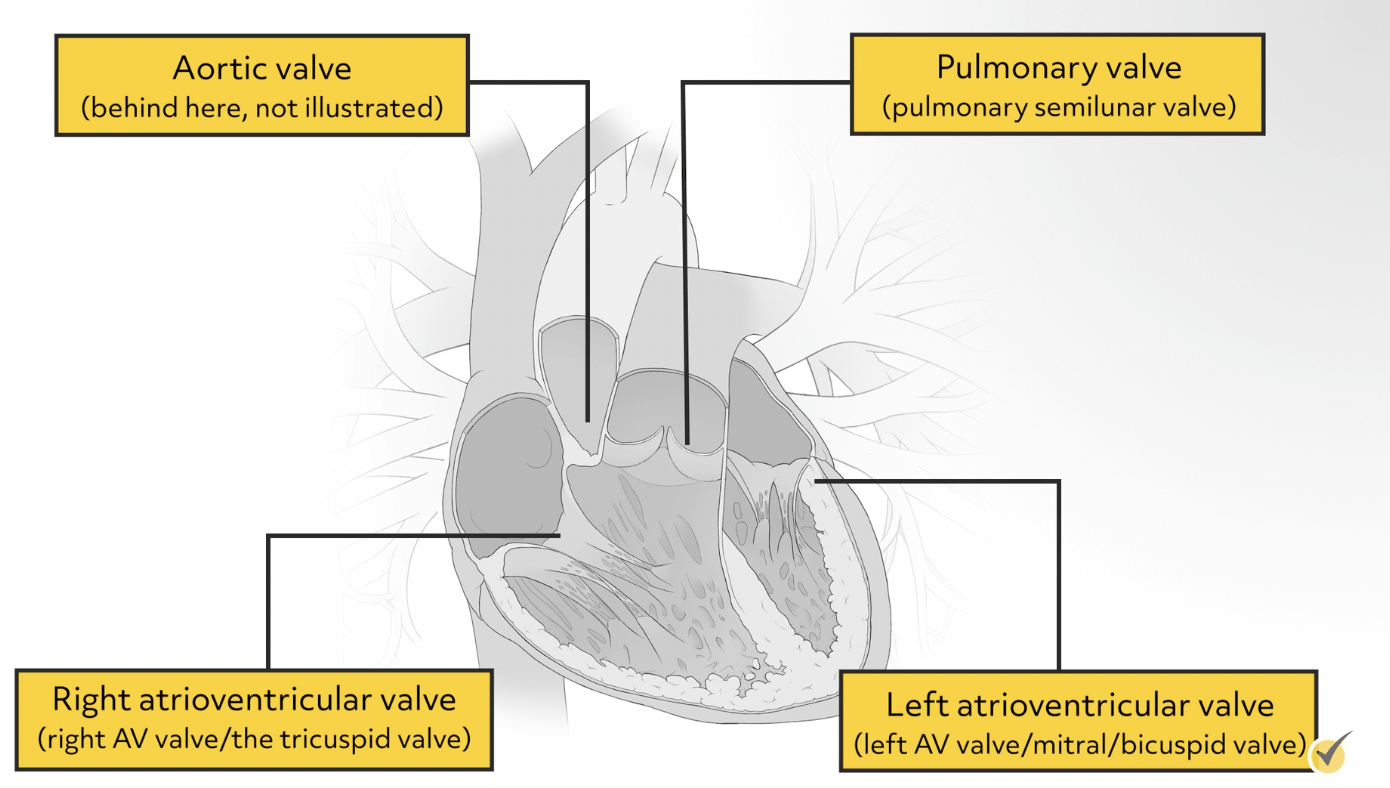 One-way, or unidirectional flow is important. If the valves are leaking and allow blood to flow in both directions, then the heart has to work harder to pump the same amount of blood. This is called valve regurgitation.

Now that we’ve looked at the chambers and valves of the heart, let’s talk about the blood vessels that connect everything and allow for the proper functioning of the heart.

As a rule, veins bring blood towards the heart, and arteries, which starts with an “a,” carry blood away from the heart. 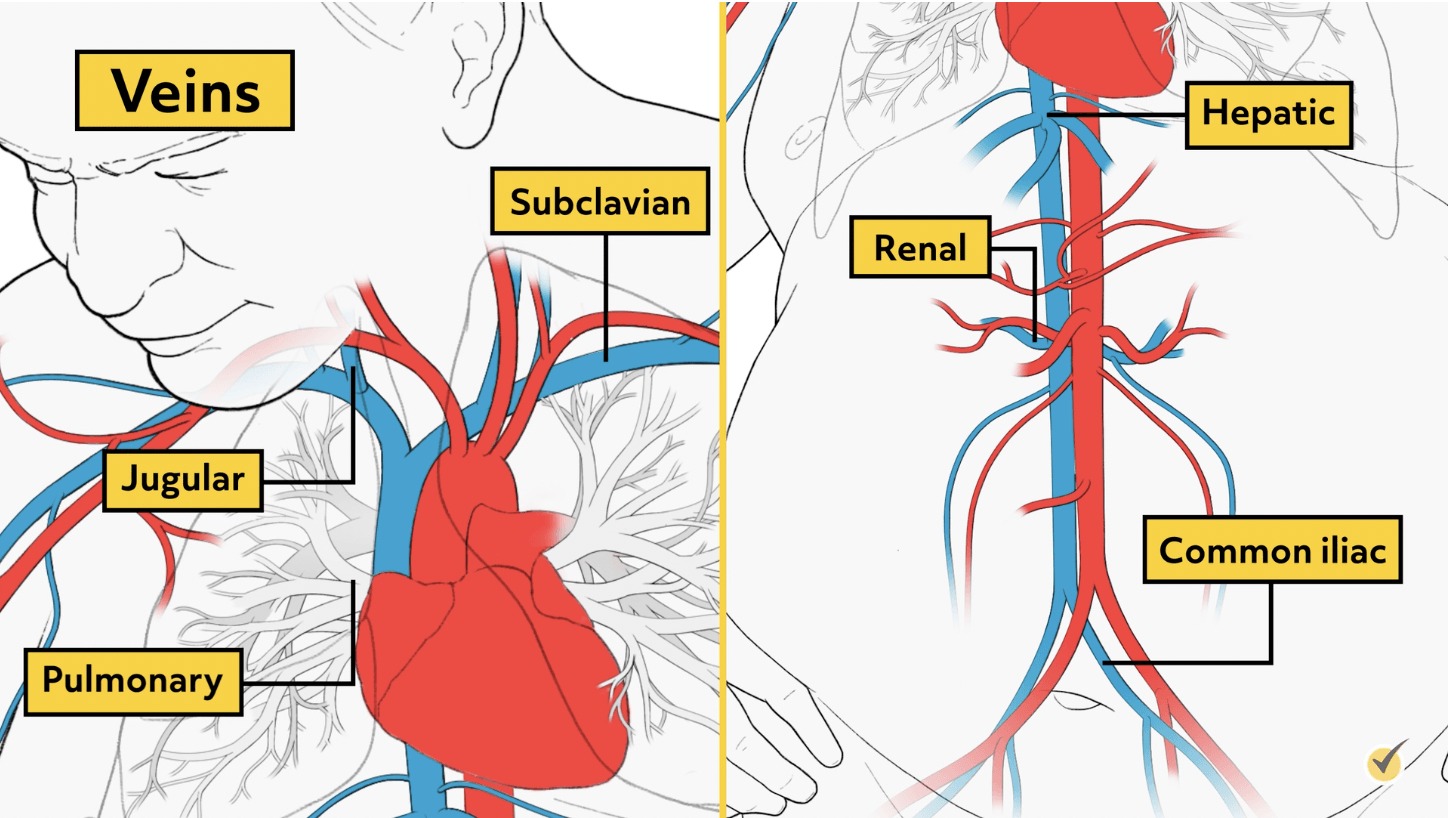 The heart also has arteries, taking blood away from the heart. Some major arteries include:

The aorta branches off into smaller arteries and is responsible for distributing blood throughout the body once it’s been oxygenated, so this is the biggest, strongest artery in the body. The left and right pulmonary arteries carry deoxygenated blood to the lungs, where the blood gets oxygenated. The heart also has coronary arteries that wrap around the outside of the heart and supply blood to the heart muscle. They are called the left coronary artery and the right coronary artery. Other major arteries in the body include the carotid artery, subclavian artery, common iliac artery, femoral artery, and renal artery. As we move further from the heart, these arteries become arterioles, and arterioles become very fine capillaries. 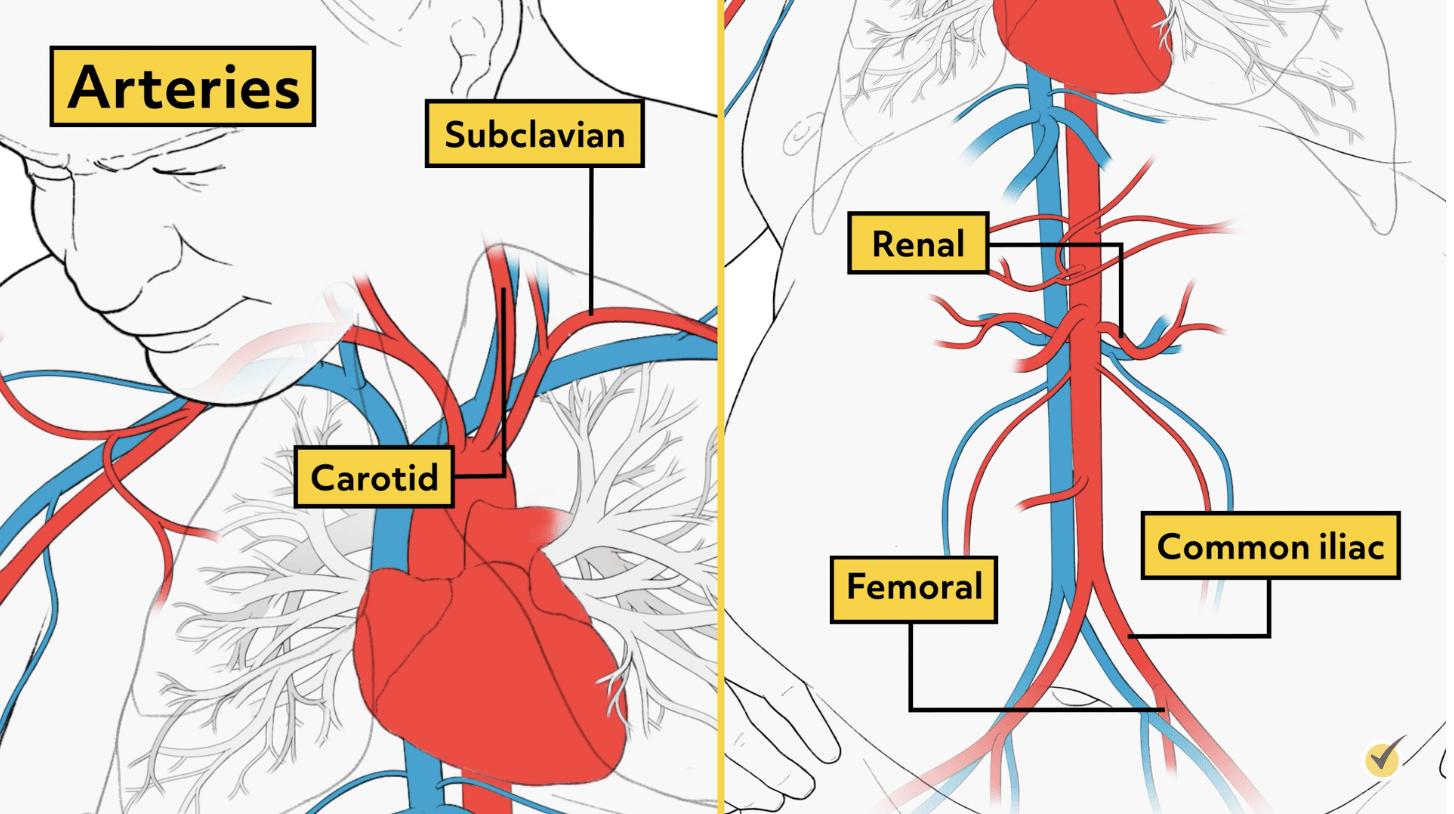 Arteries and veins are connected by way of microscopic blood vessels called capillaries that make up a capillary bed. Capillary beds are a network of capillaries located between arterioles and venules where nutrients and wastes are exchanged.

Once the blood is oxygenated, it reenters the heart through the right and left pulmonary veins and travels into the left atrium. From here, the blood is forced through the left AV valve and into the left ventricle. Finally, the blood travels through the aortic valve and into the aorta where it can be distributed to organs and tissues throughout the body that need oxygen most. The real gas exchange takes place in the capillaries where tissues trade their carbon dioxide for oxygen the blood is carrying. Now that the blood has given its oxygen to the tissues, it returns by way of veins into the superior and inferior vena cava where we started so that it can flow back through the heart and repeat the process.

As the heart beats, it goes through what’s called a cardiac cycle in which there are two phases, called diastole and systole. Systole occurs when the ventricles contract and pump blood out of the heart, and diastole occurs when the ventricles relax after contraction and refill with blood. This systolic and diastolic process measures blood pressure. Systole (or the top number) is basically the pressure required to pump blood out of the heart; and diastole (the bottom number) is the pressure that remains when the heart is in a resting state between heartbeats. 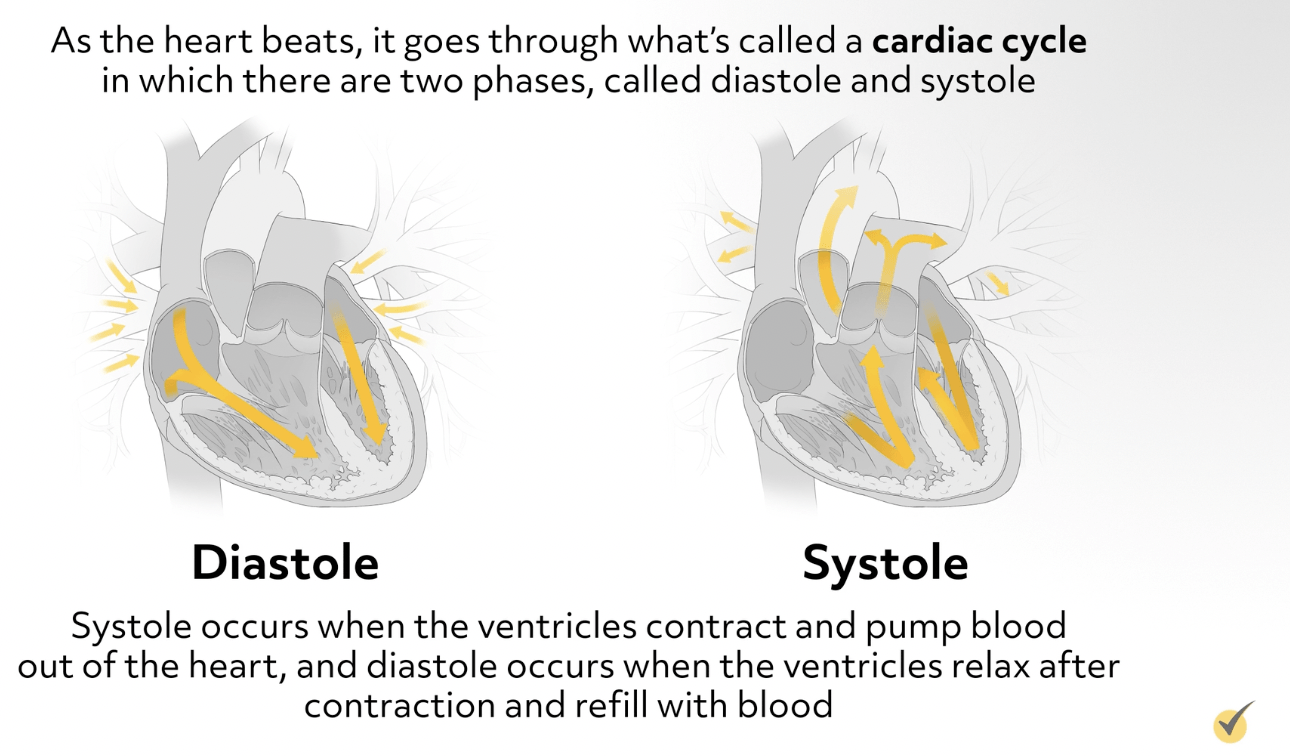 You may be wondering what causes the heart to beat. Electrical impulses from the heart muscle (the myocardium) cause the heart to beat (contract). Known as the cardiac conduction system, a group of specialized cardiac muscle cells in the walls of the heart send signals to the myocardium causing it to contract. The main components of the cardiac conduction system are the SA node, AV node, bundle of His, bundle branches, and Purkinje fibers. The sinoatrial (SA) node, located at the top of the right atrium, starts the sequence by causing the atria to contract. The SA node is referred to as the ‘natural pacemaker.’ From there, the signal travels to the atrioventricular (AV) node, through the bundle of His, down bundle branches, and through Purkinje fibers, causing the ventricles to contract. These signals of electrical current can be seen on a graph called an electrocardiogram (EKG).

The blood that runs through the veins, arteries, and capillaries is known as whole blood. Whole blood contains about 55% plasma and 45% blood cells. The average man has about 12 pints of blood and the average-size woman has about 9 pints.

The liquid component of blood is called plasma, which transports blood cells, nutrients, waste products, antibodies, clotting proteins, and hormones throughout the body.

White blood cells are the fighters because they protect our bodies against infection.

Blood has several different functions including transporting oxygen and nutrients to the organs and tissues in our body, carrying cells and antibodies that fight infection, taking waste products to the kidneys and liver so they can filter and clean the blood, and forming blood clots to stop excess bleeding.

Now that you’re familiar with the heart’s anatomy and the path blood takes as it circulates through the heart and body, let’s look at this quick review question:

Based on what you’ve learned about the circulation of blood through the heart and lungs, which of the following vessel(s) would contain oxygenated blood?

I hope this review was helpful and happy studying!