Hey guys, welcome to this Mometrix video over DNA vs. RNA. In our last video we looked at Chromosomes: their structure and their function. In this video we will take an in depth look at the Structure and function of both DNA and RNA.

To start let’s take a look at what DNA and RNA are, and then we will go back through and compare them.

DNA stands for deoxyribonucleic acid and is a nucleic acid that contains the genetic instructions used in the development and functioning of all known living organisms. DNA is housed in the nucleus of the cell, and works as a vehicle for storage and transferral of an organism’s genetic information. DNA is a polymer that has a deoxyribose and phosphate foundation with four nitrogenous bases: adenine and guanine (which are purine) and cytosine and thymine (which are pyrimidine). Now, Adenine only pairs with Thymine, and Guanine only pairs with Cytosine.

DNA is a double helix structure and looks sort of like a spiraling staircase. The way that it spirals actually helps to give DNA added protection and stability. Let’s take a look at exactly why: so, DNA has two strands (both located at the lateral ends), and these strands are twisted together like a spiraling staircase, which makes up the the double helix. The lateral ends of these strands consist of the sugar-phosphate backbone of neighboring nucleotides that are bonded with one another. The phosphate molecule forms a covalent bond (which means it shares electrons) with the deoxyribose sugar. These hydrogen bonds are what actually cause the DNA strands to spiral. The nitrogenous bases (adenine, guanine, cytosine and thymine) are sandwiched between the two sugar-phosphate strands. Each nitrogenous base is directly adjacent to another nitrogenous base pair forming hydrogen bonds. Hydrogen bonds are weak bonds, but the bonds between the phosphate and sugar molecule are very strong bonds (which means they are very stable, and can handle resistance). So, basically this phosphate-sugar backbone’s main job is to hold the nitrogenous bases (that function as the coded set of instructions) in place, and to protect them from outside elements. The spiraling of the sugar-phosphate backbone adds 360 degree protection to the nitrogenous bases, rather than the nitrogenous bases being un-spiraled and exposed. If it were not spiraled, then the weaker hydrogen bonds between the nitrogenous bases would be exposed to the surrounding elements, which could potentially break the bonds.

RNA stands for ribonucleic acid and is a nucleic acid that executes the instructions given by the DNA. RNA is housed in the nucleus and cytoplasm. The sugar in RNA is ribose. RNA is a single-strand chain of alternating phosphate and ribose units with the bases adenine, guanine, cytosine, and uracil bonded to the ribose. RNA molecules are involved in protein synthesis and sometimes in the transmission of genetic information. The primary role of RNA is to deliver the genetic information (or code) necessary for the building of proteins from the nucleus to the ribosome. This procedure stops the DNA from exiting the nucleus, for the purpose of protecting the DNA. The production of protein is not possible without RNA. RNA is also crucial to the process of DNA transcription. An enzyme called RNA polymerase latches on to the DNA strand then starts constructing a sequence of nucleotides to assemble a compatible RNA strand.

mRNA is transcribed from DNA, and it transfers the coded instruction for protein synthesis.

rRNA is a part of the ribosome and controls the translation of messenger RNA into the proteins.

tRNA carries the amino acids, that follow the correct coding, to the ribosomes to be attached to into proteins.

DNA has the sugar deoxyribose, while RNA has the sugar ribose. The difference between ribose and deoxyribose is fairly subtle; ribose has one more -OH group than deoxyribose has, and that is the only difference. Though the contrast is subtle that difference changes the entire function. DNA is double-stranded, RNA, on the other hand, is single stranded.
DNA is more stable under extreme condition conditions, but RNA is not very stable due to it only being single stranded. DNA and RNA perform different functions in humans. DNA is responsible for storing and transferring genetic information while RNA directly codes for amino acids and as acts as a messenger between DNA and ribosomes to make proteins. DNA and RNA base pairing is slightly different since DNA uses the bases adenine, thymine, cytosine, and guanine; RNA uses adenine, uracil, cytosine, and guanine. Uracil differs from thymine in that it lacks a methyl group on its ring.

I hope that this video on DNA vs. RNA was helpful to you. If you enjoyed it then be sure to give us a thumbs up. In our next video we will take a look Genes and alleles, so be sure to subscribe to check out more of our tutorials. 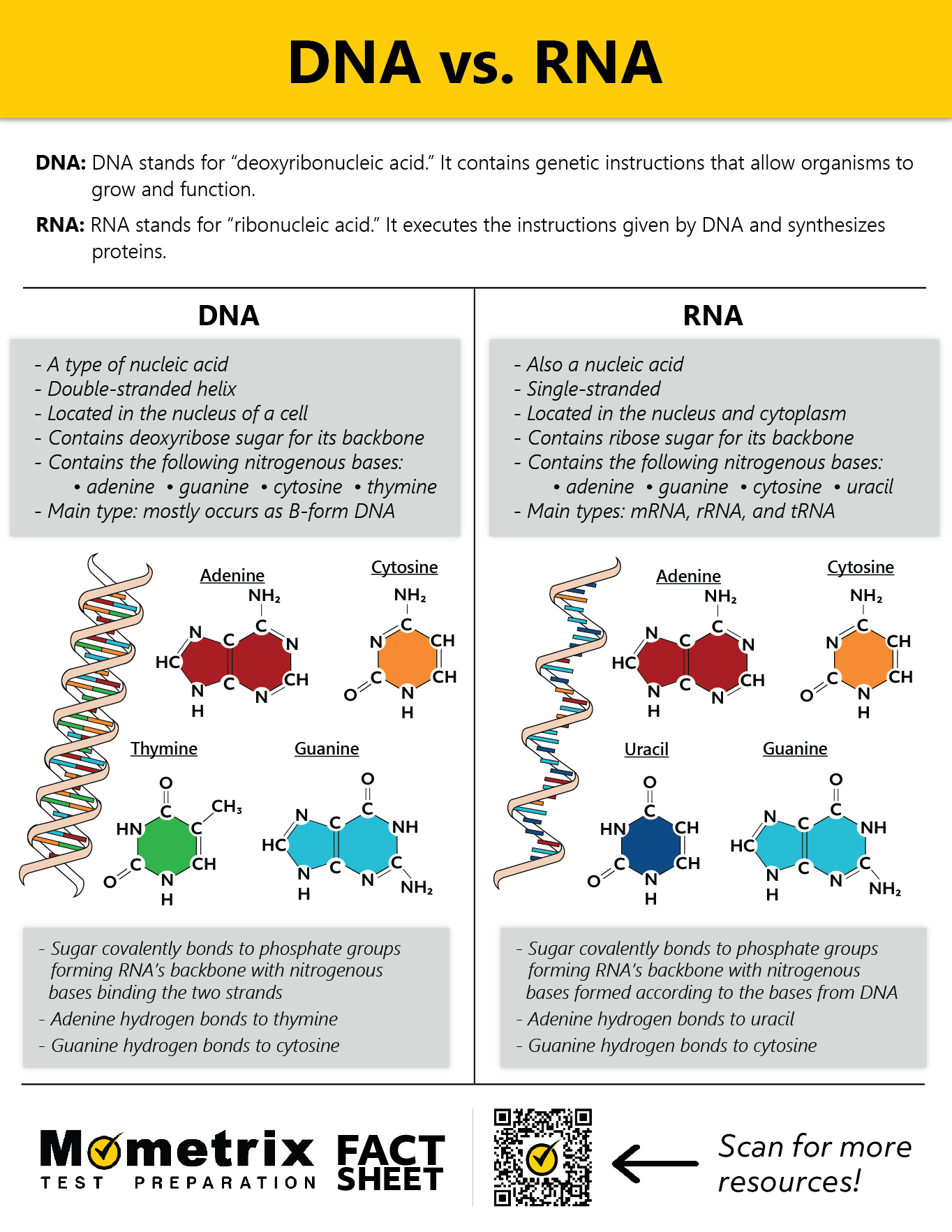