Hi, and welcome to this video about classification!

Have you ever thought about the millions of organisms that exist and how they’re all connected? Maybe you’ve thought about how a marmot and a bear might be related because they’re both furry and walk on all fours. If you’re thinking like this, you’re thinking a lot like Carl Linnaeus, the founder of the modern taxonomy system we use to group organisms for scientific research and understanding. Linnaeus used his observations about plants and animals to sort them into taxa, or groups, so that everything was simplified and organized. Even though this sounds easy enough, it was Linnaeus’ life work and paved the way for other scientists like Charles Darwin to come along and further establish those biological connections among organisms.

Even though Linnaeus’ system was morphology-based and came before we understood genetics, the framework is still in use. Furthermore, the system is always being updated as scientists learn more about genetics and discover new species.

One of the more recent updates has been the addition of a domain taxon, or group, to the top of the taxonomy chart. This is the largest taxon and separates all living organisms into three main groups: Archaea, Bacteria, and Eukarya. Both archaea and bacteria are prokaryotes, meaning the DNA in their cells is not membrane-bound, and eukarya are eukaryotes, meaning their DNA is contained within their cells’ nuclei.

Following the domain level, the classification system reads from least specific to most specific in the following order: Kingdom, Phylum, Class, Order, Family, Genus, and Species. A mnemonic device often used to remember this order is King Philip Can Only Find Green Socks. 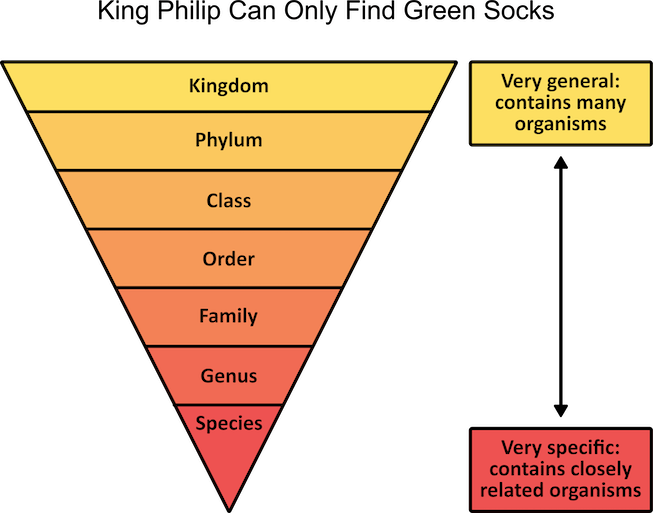 After the three domains we discussed, there are six kingdoms: Eubacteria, Archaea, Protista, Fungi, Plantae, and Animalia.

The Eubacteria kingdom consists of Prokaryotic unicellular organisms which includes most bacteria. Organisms in the Archaea kingdom are also prokaryotes and many are found in extreme environments like hydrothermal vents or hot springs. An older classification model combines Eubacteria and Archaea into one kingdom, Monera.

The next four kingdoms are all eukaryotic cells with nuclei and membrane-bound organelles. Protists, such as algae, typically move by the use of cilia, flagella, or by an amoeboid mechanism. Fungi are multicellular organisms without chloroplasts and contain a fibrous substance called chitin in their cell walls. Plantae and Animalia are probably more familiar to us, as they include plants and animals respectively.

When it comes to talking about an organism, we use the last two taxa, the genus and the species, to do so. The two-name method of naming is called binomial nomenclature. For example, bald eagles are referred to as Haliaeetus leucocephalus. This is the formal, scientific way to talk about them as organisms. “Haliaeetus” represents their genus and “leucocephalus” represents the species. Ok, so we know they’re Haliaeetus leucocephalus, but what about the rest of their lineage? It is largely based on their genetic similarity to other organisms, but we also know that genetics lead to distinct morphology. Keeping morphology in mind can be a good way to not only help you memorize, but to hopefully help you understand the breakdown of how things are organized.

Let’s go ahead and go through the entire classification system for bald eagles together starting at the Domain and working our way down. Since they are eukaryotes, they belong to the Eukarya domain. For Kingdom, they are part of the Animalia taxon because they are multicellular, their cells don’t have a cell wall, and they ingest food instead of being an autotroph that makes its own food. For Phylum, they are part of the Chordata taxon because they are vertebrates that have a spinal cord. There are many subphyla that account for other features of their build and skeleton, but for simplicity’s sake, we’ll keep our scope to the bigger picture. For class, they are considered to be in Aves. The order is Accipitriformes, the family is Accipitridae, and the genus is the already-discussed Haliaeetus. Note that the first letter of the genus is always capitalized and the whole word is also italicized. This goes for any organism. And finally, at the species level, bald eagles are known as Haliaeetus leucocephalus. Even though it seems redundant, the technical way to refer to the species of an organism is with the binomial nomenclature we talked about earlier. Just like the genus level, the species level is also italicized.

We can do this for all living things like oak trees, cyanobacteria, and even your cat that’s curled up next to you on the couch. Not surprisingly, house cats have a lot in common with big cats like tigers and lions. They’re both Animalia kingdom, phylum Chordata, and in the class of Mammalia, order Carnivora. Finally, we have a series of “Fs”. Felidae for the family, and Felis catus for the genus and species respectively. So how did the house cat go from a big cat like a lion or tiger to a domesticated cat? We can actually trace this back genetically to the species that most likely preceded the house cat to Felis lybica which is also known as an African wildcat. Domestication and selective breeding of this species have most likely caused this change.

Ok, now that we’ve covered how organisms are classified, here are a couple of review questions to test your knowledge:

1. Which is the correct order of the classification system starting at the top and moving down?

Remember the mnemonic we talked about: King Phillip Can Only Find Green Socks.

2. What is the correct way to scientifically refer to a bald eagle (using binomial nomenclature)?