Arcs and Angles of Circles

When we look around us, after polygons, circles are the next most common shape that we are surrounded by in our environment. A circle is created by a 360° rotation. 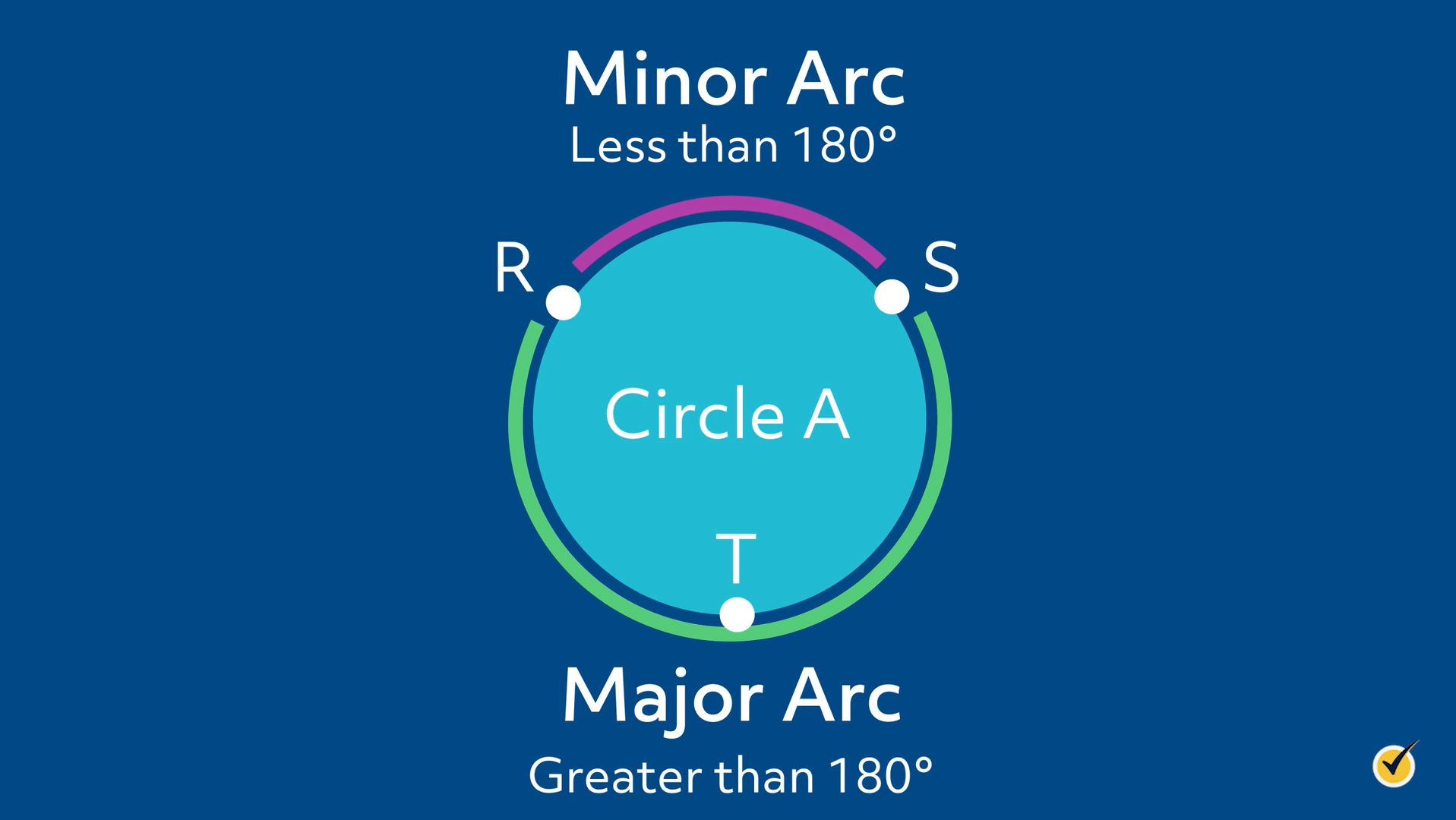 Some important lines and segments associated with circles are chords, secants, and tangents. 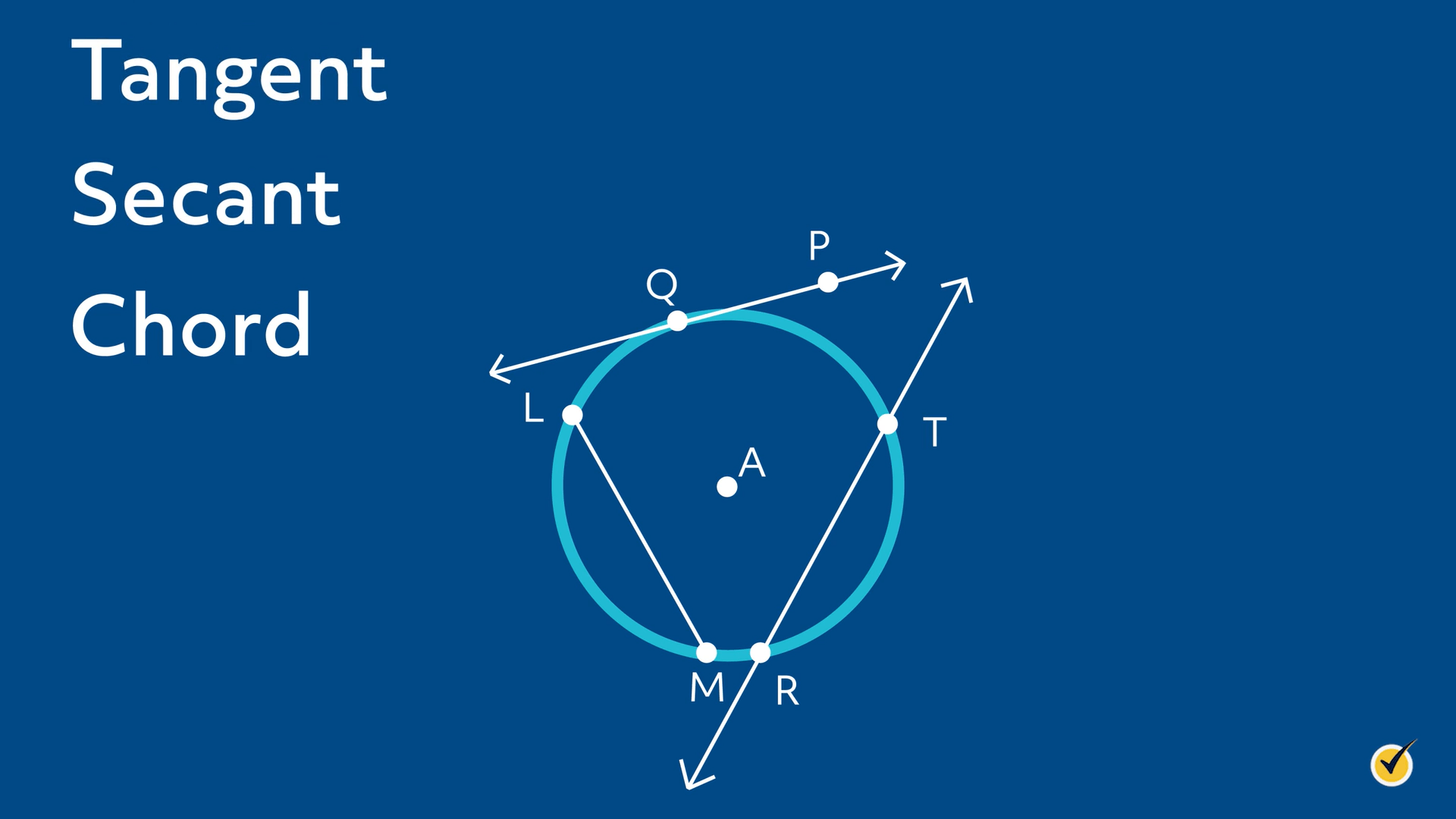 A chord is a line segment with either end touching the circle. Line segment \(LM\) is a chord on circle \(A\). A secant line is similar to a chord, except it is a line that passes through two points on the circle instead of being a line segment. And a tangent line is a very special kind of line that only touches the circle at one point, called the point of tangency. Line \(PQ\) is a tangent and point \(Q\) is the point of tangency. Knowing these vocabulary words related to circles is important in helping understand the circle theorems which will help us solve problems.

The radius of the circle is always perpendicular to the point of tangency.

When two chords share a point on the circle, an inscribed angle is formed. In circle \(A\), the chords \(RS\) and \(TS\) form the inscribed angle \(RST\), which has its vertex on the circle. The arc that is formed by the legs of angle \(RST\) is called an intercepted arc. An angle that has the center of the circle as its vertex is naturally called a central angle. In circle \(C\), angle \(MCN\) is a central angle and arc \(MN\) is its intercepted arc.

Here is a special case of an inscribed angle. 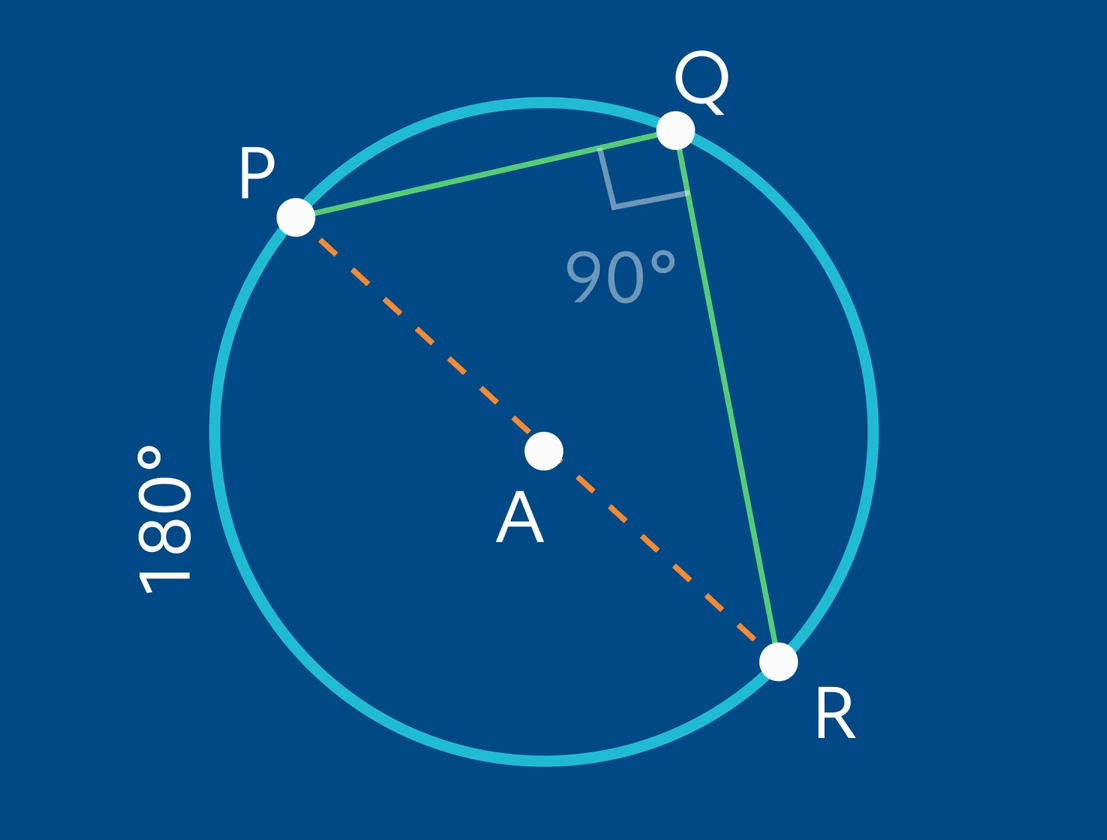 In circle \(A\), inscribed angle \(PQR\) encompasses the diameter of the circle, line segment \(PR\) Remember, the diameter of the circle divides the circle into two equal parts, called semicircles. A circle has a total of 360°, so a semicircle has 180°, or half the measure of a full circle. So this must mean that the intercepted arc of angle \(PQR\) is 180°. If we use the inscribed angle theorem, we find out that angle \(PQR\) is 90° because it is half the degree measure of the intercepted arc.

A sector of a circle is a section of a circle between two radii. The red area in the diagram is an example of a sector. 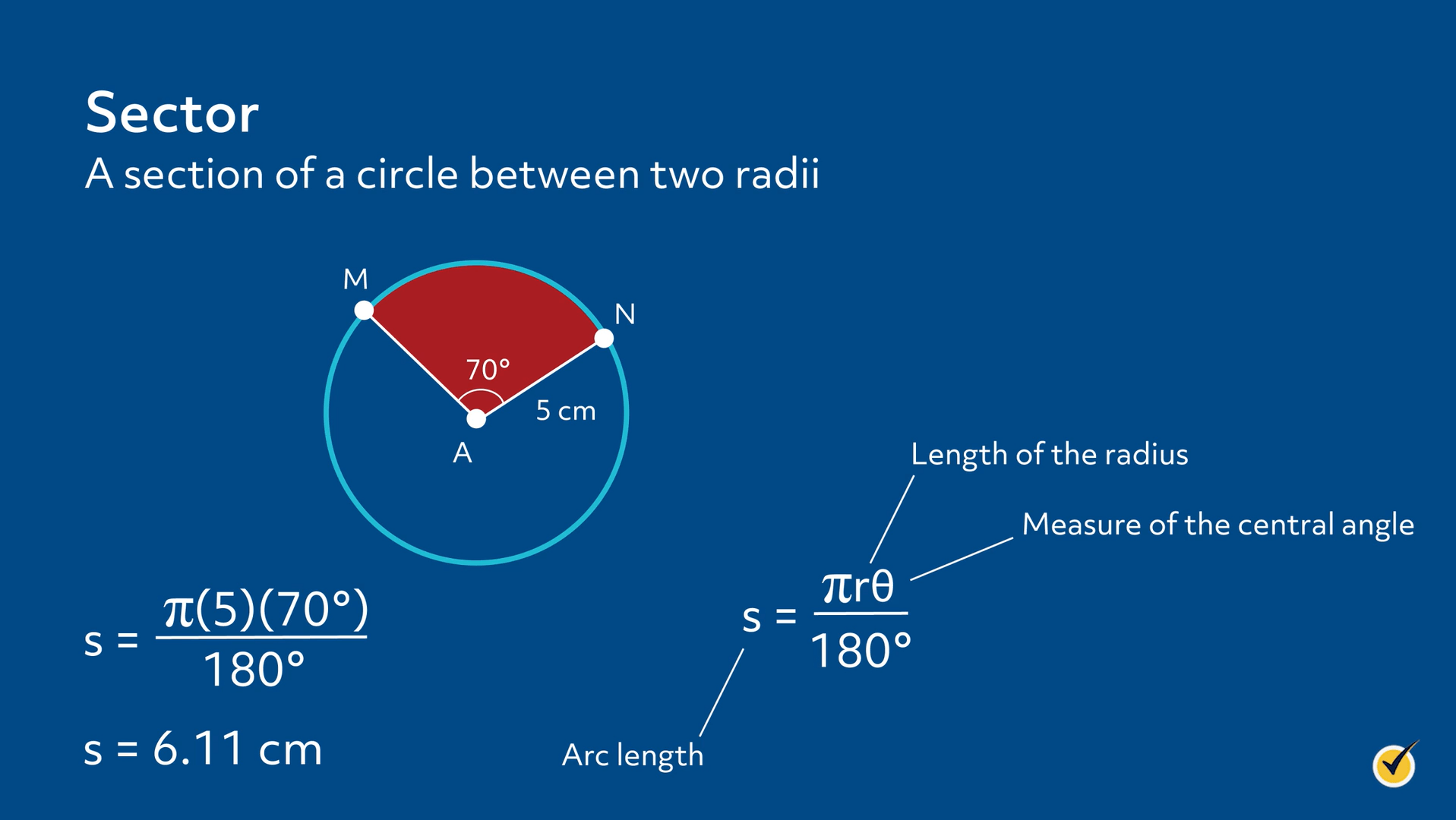 Thanks for watching this video, and happy studying! 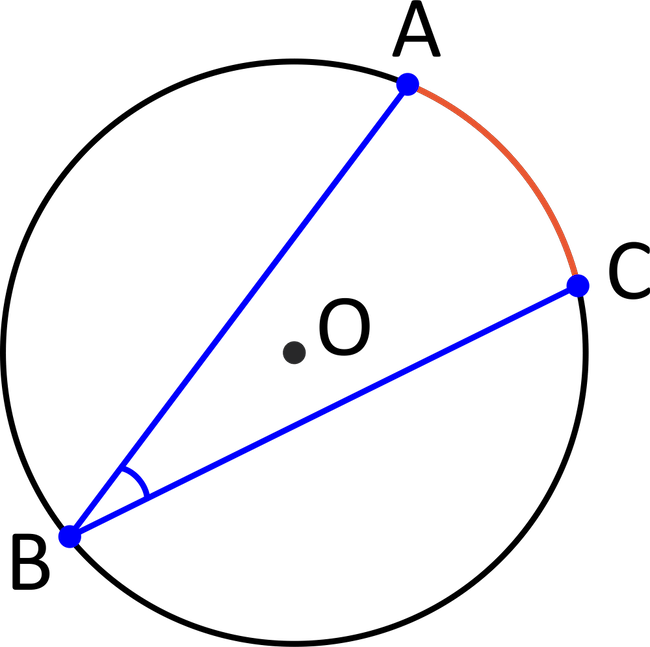 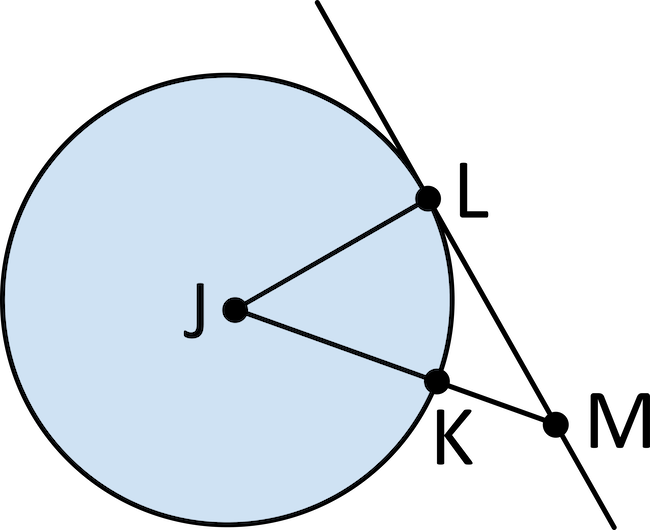 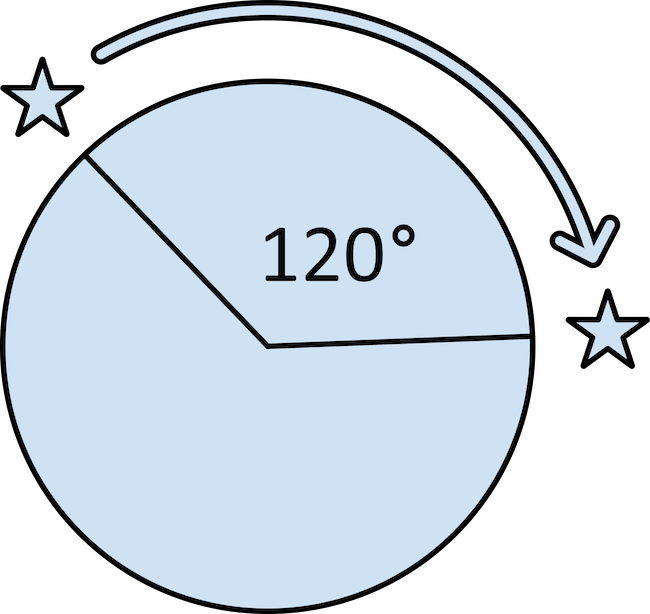 A flashlight shines across a circular field. What is the angle measure of the intercepted arc that will be illuminated? 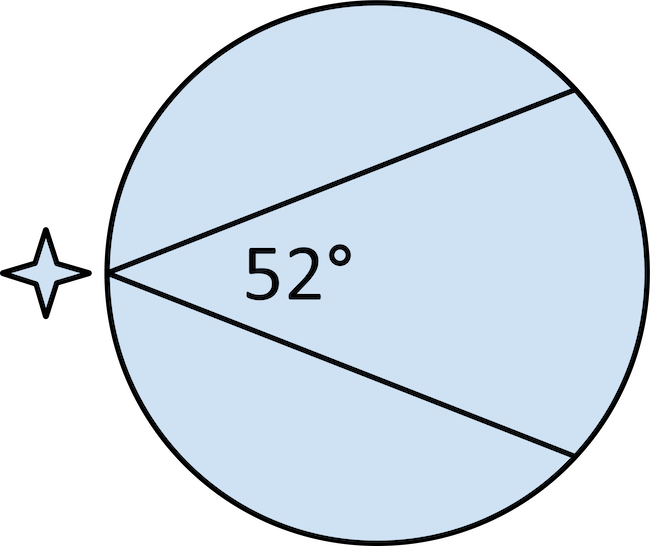