Anatomical and Clinical Parts of Teeth

Welcome to this video on the anatomical and clinical parts of teeth.

An infant’s primary teeth first begin to erupt at about 6 months of age on average. These teeth are commonly referred to as the “baby teeth” and begin to shed when the child is about 6 years old, when they are replaced by permanent teeth.

By about age 11, most children have shed all of their primary teeth and have their permanent dentition, or set of teeth, although the last 4 molars usually don’t come in until about age 21.

These last molars are called “wisdom teeth” and are often removed because they become impacted, which means they did not have the room they needed to emerge properly.

While the primary teeth consist of only 20 teeth, a full set of permanent teeth consists of 32 teeth or 28 if all four wisdom teeth are removed. There are four different types of teeth:

There are eight incisors, four in the upper jaw and four in the lower. These are what we usually call our front teeth and are intended to help you bite into food. Incisors are also the first teeth that erupt in infants. 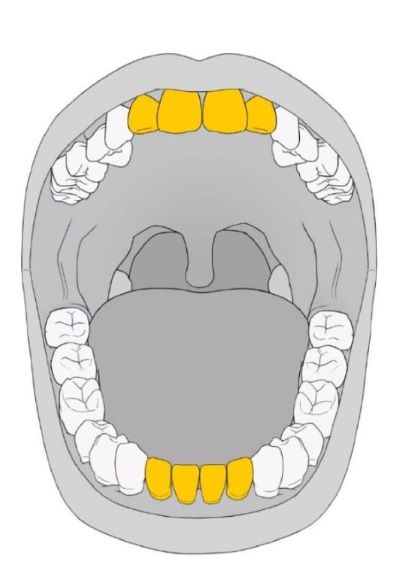 The four canine teeth are the sharp, pointed teeth on either side of the incisors, top and bottom. They aid in the process of tearing food. 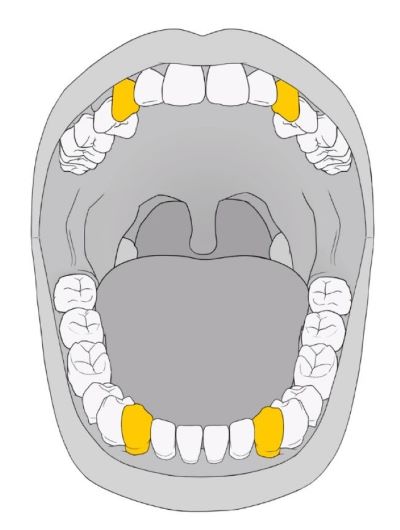 There are 8 premolars or bicuspids, two behind each canine tooth, top and bottom. They have flat ridged surfaces and help crush and grind food. 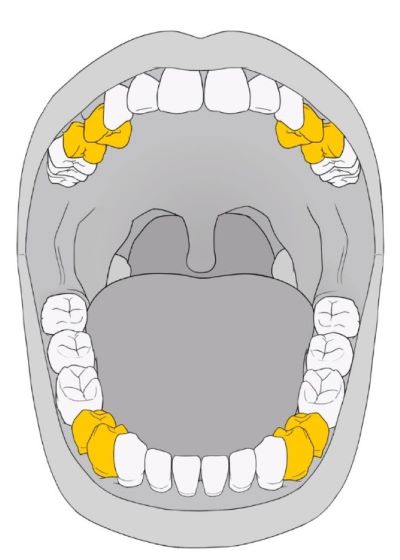 The last teeth are the 12 molars, three behind the premolars, top and bottom, and these include the wisdom teeth. These teeth are the largest and help to grind food into small enough pierces to easily swallow. 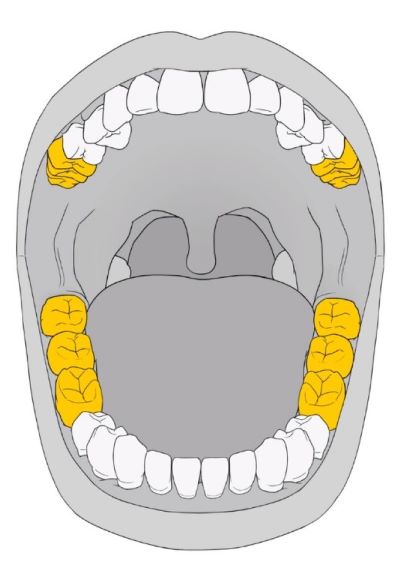 While the different types of teeth may have a different shape and appearance, the basic structure of all teeth remains the same. The parts of a tooth include the

The entire crown is covered and protected by a layer of enamel. Enamel is white, although some may have a yellow or gray tinge. Enamel is the hardest material found in the body, able to withstand a force of 100,000 pounds per square inch, though it is still susceptible to cracking or chipping.

The next layer of the tooth is the dentin, which makes up the major portion of the tooth. Dentin extends from the crown to the roots and comprises somewhat elastic mineralized tissue that is harder than bone, but not as hard as enamel.

Dentinal fibers are found within dentin, and these fibers can transmit pain and sensations of heat and cold, so dentin is considered living tissue.

The pulp is the inner layer of the tooth and contains blood vessels and nerves, so this part of the tooth is living. The part of the pulp that is found in the crown is called the coronal pulp and the part in the roots is the radicular or root pulp. Pulp helps to form dentin.

Once a tooth is mature, it no longer requires pulp and can survive, as long as the pulp is not infected.

Remember that while the crown is covered by enamel, the roots are covered by cementum. The point at which the enamel of the crown becomes the cementum of the root is called the cervical line or the cementoenamel junction.

The periodontium provides protection, support, and nourishment to the tooth. The periodontium comprises the gum, the cementum, the alveolar bone or process, and periodontal ligaments.

The periodontal ligaments connect the cementum to the alveolar bone in the tooth socket.

Cementum is rigid connective tissue that has a yellowish color. It can sometimes be seen at the base of a tooth if the person has periodontal disease and receding gumlines.

That’s all for now – thanks for watching and happy chewing.